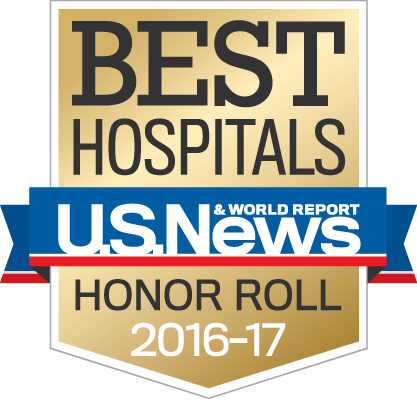 In addition to the Honor Roll, the publication ranks hospitals in 16 specialties each year. This year, 153 U.S. hospitals achieved a high-enough level of performance to be ranked in one or more specialties. BWH ranked in 12: Cancer (Dana-Farber/Brigham and Women’s Cancer Center), Cardiology and Heart Surgery, Gynecology, Nephrology, Pulmonary, Rheumatology, Diabetes and Endocrine Disorders, Geriatric Care, Neurology and Neurosurgery, Gastroenterology and GI Surgery, Urology, and Orthopaedics.

The Honor Roll recognizes 20 hospitals out of approximately 5,000 that have the most and highest rankings in the 16 specialties it evaluates. Honor Roll hospitals also have the greatest number of “high-performing” ratings in a select group of procedures and conditions. The Brigham ranked 6th on the list last year.

“I’m extremely proud of our continued presence on the Honor Roll of Best Hospitals, which is possible because of our staff’s steadfast commitment to carrying out our mission,” said BWHC President Betsy Nabel, MD. “But more important than any awards or accolades we receive is the way we work together to provide comfort to those entrusted to our care and offer hope for patients around the world.”

U.S. News noted “several significant changes” were made to its methodology this year, which Nabel says BWHC leadership is reviewing.

Several specialties at the Brigham—Cancer, Cardiology and Heart Surgery, Gynecology and Rheumatology—made the top 10 list in their respective areas of medicine.

Across Partners HealthCare, BWH’s sister institutions were also recognized with top honors, including Massachusetts General Hospital, which ranked third on the Honor Roll.