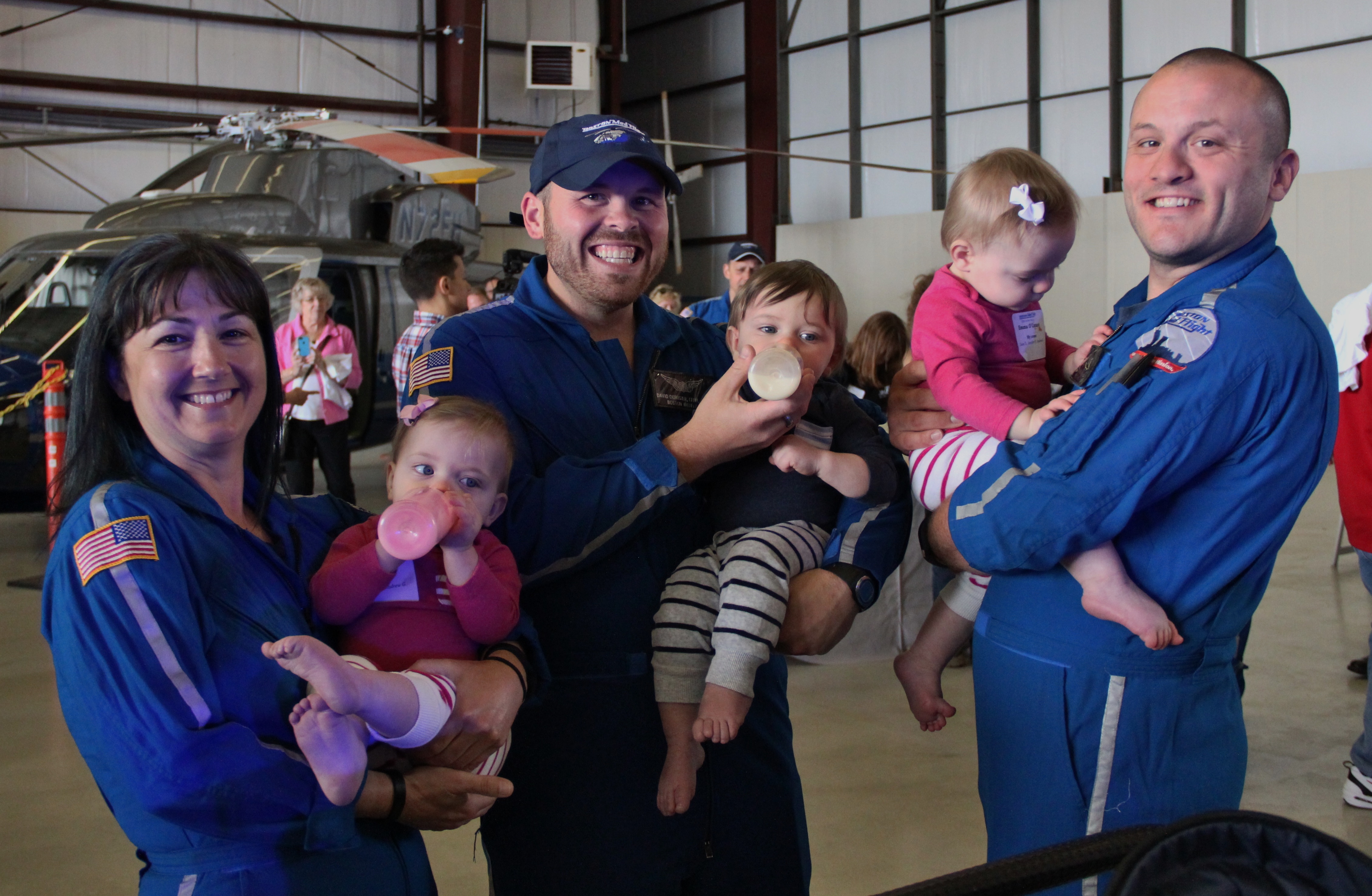 From left: Triplets Paige, Christian and Emma reunite with the MedFlight Boston team (Jennifer Park, David Derosier and Andrew Gordon) who transported them from BWH’s NICU.

When Katy and Kyle O’Connor realized they were having triplets, feelings of anxiety and excitement crossed their minds. Already having two other children—3 and 5 years old at the time—the prospect of triplets was overwhelming.

But any worries were soon replaced by joy after Katy gave birth last year at 34 weeks to Christian, Emma and Paige at BWH. Katy recounts receiving advanced, expert care at every step of her pregnancy from the physicians to the anesthesiologist and the lactation and NICU nurses. The entire care team provided her with superior care and a sense of security at a very uncertain time.

“I knew my babies would be given the best possible care at the Brigham, and that’s why I chose the Brigham to have not only my triplets, but my two singletons as well,” shared Katy.

After five days in the NICU, the triplets were transported via ambulance by Boston MedFlight to Emerson Hospital in Concord, Mass., so that they could be closer to home when ready for discharge. Katy recalls how nervous she and her husband were to have the babies transported while still in their isolettes to Emerson, where they spent 12 days before being discharged.

In June, the O’Connors reunited with the team that transported the babies from BWH to Emerson Hospital during MedFlight’s annual reunion. Boston MedFlight holds an annual reunion at the Hanscom Air Force Base that brings together former patients with their transport crews.

“We had a blast at the reunion, and it was great to be able to meet Jennifer, Dave and Andrew [our transport team] again and express our gratitude for carrying our most precious cargo,” said Kyle.

Now at 1 year of age, the babies are thriving.

“When they first went to their pediatrician around three- weeks old, they were in the second and third percentiles for height and weight,” Katy said. “Now in the 50th and 65th percentiles, the triplets are walking, talking and discovering new words every few days.”

Julian Robinson, MD, chief of Obstetrics in the Department of Obstetrics and Gynecology, says it was a joy to care for the O’Connor family.

“As prospective parents, Kyle and Katy faced the challenges of the triplet pregnancy with equanimity and common sense,” Robinson said. “It is great to know that Emma, Christian and Paige are continuing to thrive.”

Andrew Farkas, CRFN, EMT-P, chief operating officer at Boston MedFlight, says the reunion provides an opportunity for staff to talk about their experiences, as well as meet the families they have assisted.

“We were really lucky; we know that not all triplet pregnancies are as successful, and we are blessed that we have these three healthy babies,” added Katy.