Some of the Brigham’s tiniest patients and their families settled into private, spacious and sunshine-filled rooms late last month, following the first phase of a historic transition into the newly expanded neonatal intensive care unit (NICU).

The first 25 patients were moved into the new unit around 9 a.m. on July 25. Several departments across BWH coordinated in a makeshift command center to ensure the process ran safely and smoothly.

Babies were moved one at a time, with teams of about six staffers transporting each crib or isolette slowly and carefully to the new unit, located across the hall on the sixth floor of the Connors Center for Women’s Health. Care teams communicated with the command center via two-way radios throughout each transport, with other clinical staff going through safety checklists before and after each move.

“It was an amazing, coordinated effort from nursing, physicians, respiratory therapy, IT, biomed, engineering and family support to move our smallest and sickest infants without any incident and with full celebration of the new surroundings by all,” said Terrie Inder, MD, MBChB, chair of Pediatric Newborn Medicine. 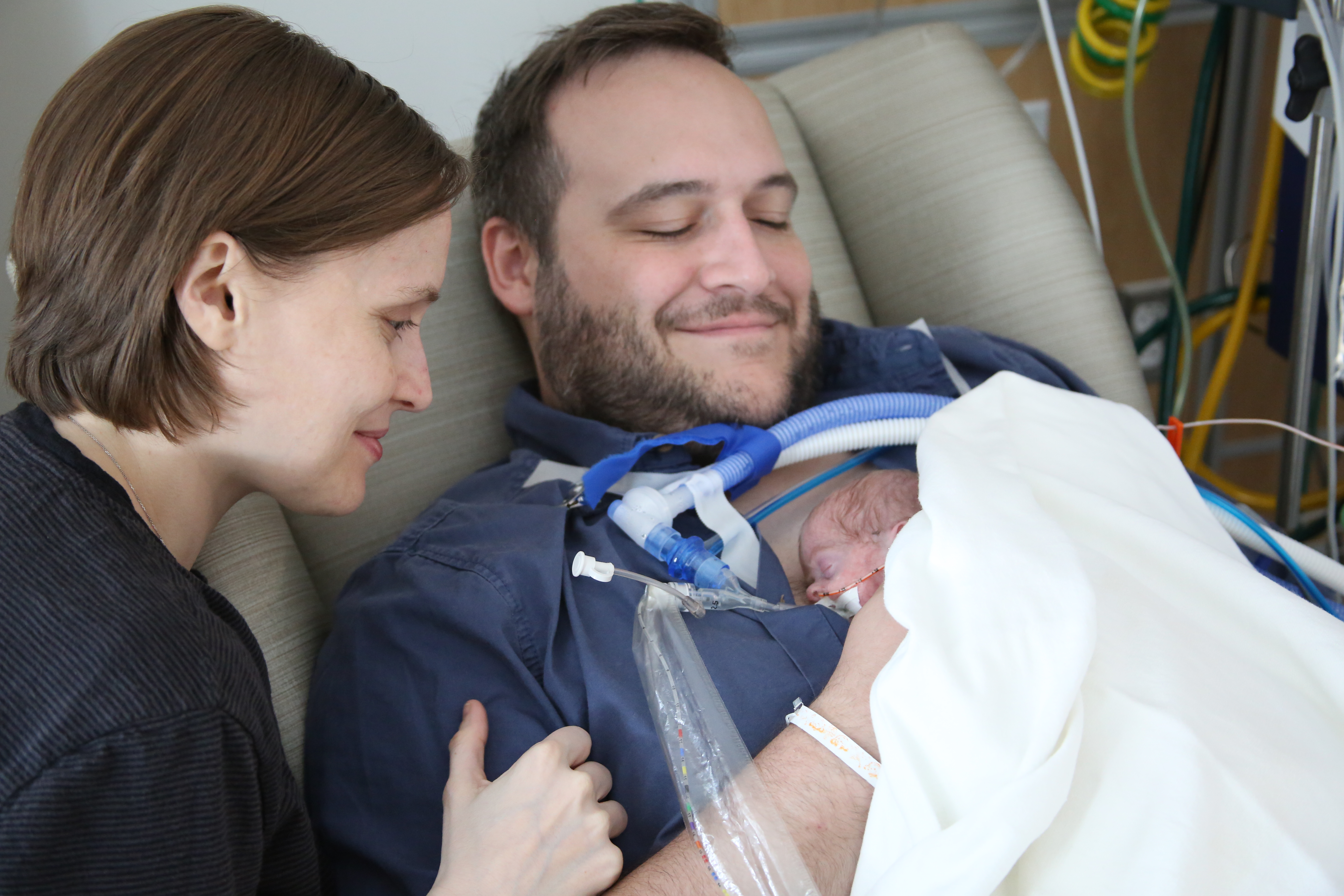 Jeff Lamoreaux and Adria Gottesman-Davis practice kangaroo care with their daughter, Rene, and relax on a recliner in their room in the new NICU.

The move will be completed in two more phases, with the final group of babies being moved in by November 2017. For now, the remaining NICU patients will stay in the original space; those requiring more acute care were moved first.

Ultimately, the design will triple the size of the NICU, and each family in the new unit will receive a private room. The average room in the new space is 173 square feet and comes with multiple amenities to make families more comfortable during their babies’ stay. Each room has a pull-out sofa and a recliner, closet space to store clothing and other personal items, and an original piece of artwork.

Throughout the unit are also quiet common areas, an outdoor rooftop patio and a spacious lounge for families. Large windows throughout the unit, including those in many patient rooms, provide ample amounts of natural light; all windowed rooms are outfitted with blackout curtains, as well.

Jessica Bordes-Joyner, whose infant daughter, Kaia, was one of the BWH babies moved into the new NICU, says the new environment is an “amazing” change.

“It’s so calm and bright in here, and I think a lot of families are really going to appreciate that because you’re going to go through a lot of hard times in the NICU, but this uplifts it a little bit,” Bordes-Joyner said. “It takes off a little of the anxiety or whatever a family may be going through.”

Julie Cadogan, RN, a nurse in the NICU whose patients were part of the move, says the new space will help NICU babies grow and develop in a more peaceful environment.

“I think the new unit is going to be a great place for our patients and their families,” Cadogan said. “For the nurses, it’s going to be an adjustment—we’re used to group nursing—but, in the end, it will be beneficial for everybody.”

Regardless of their surroundings, Bordes-Joyner says, the most valuable part of her family’s stay here has been the high-quality, compassionate care they have received at the Brigham over the years.

After suffering a miscarriage late into her previous pregnancy, Bordes-Joyner and her family were devastated. When they came back to the Brigham for Kaia’s birth, they were overwhelmed by the level of support they received.

“You would think you’re just another patient, but they treated us more like family,” Bordes-Joyner said. “When we knew we were having Kaia, our care team was just as excited as we were. When I came into Delivery, the nurses on the fifth floor remembered me from two years ago. They were rooting for us and made Kaia’s birth so much more special.”

NICU Moves Over the Years

This is the third move for the Brigham NICU, according to Catherine Pate, the hospital’s archivist.

In 1981, 28 babies from the Special Care Nursery—as the NICU was known then—were moved from the Boston Lying-In Hospital at 221 Longwood Ave. to the lower level of the Tower, according to hospital records.

Following the 1994 opening of the Center for Women and Newborns—now known as the Connors Center— NICU babies were transported from the Tower to the sixth floor of the CWN building.