When Angel Fetene, 7, skipped into the Department of Radiation Oncology’s pediatric waiting room at BWH before a recent appointment, she greeted Courtney Audet, a child life specialist there, with a big hug. Then, she popped the question: Could she watch another episode of her favorite Disney show, “Doc McStuffins,” during her radiation therapy treatment?

“Of course you can,” said Audet, watching her young patient twirl around in a silver dress, sparkly shoes and pink tiara. “Do you remember which episode you were watching last time?” 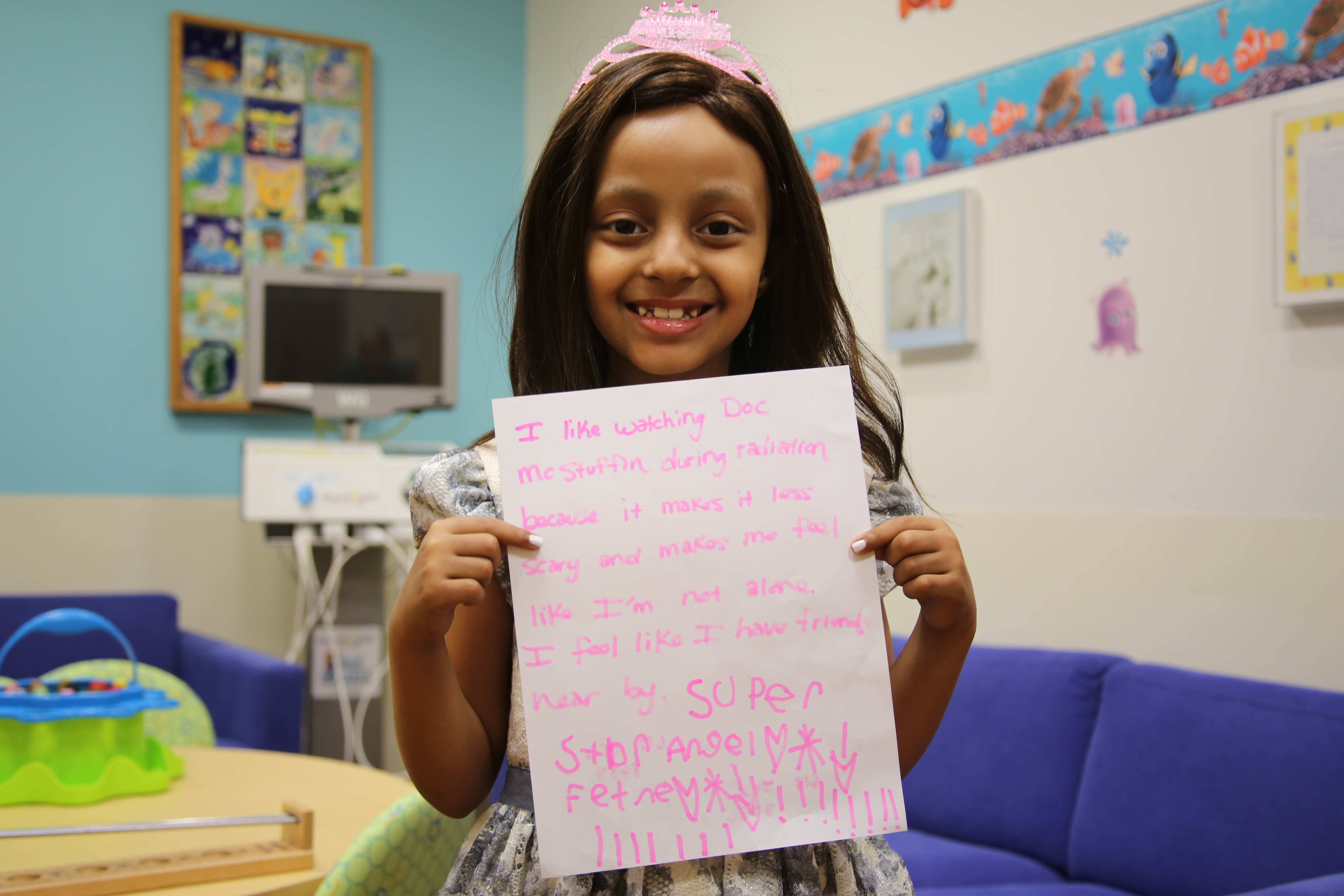 Angel Fetene says receiving radiation treatments at BWH was easier because she could watch her favorite TV show during appointments.

Questions like that weren’t part of Audet’s usual rapport with patients until this spring, after she researched ways to help children get through radiation appointments without having to be sedated. Audet came up with a possible solution: If pediatric cancer patients could watch videos during treatment, it might make them less anxious.

For radiation therapy to be effective, a person must lie on a treatment table under a large machine for 15 to 30 minutes a day—without moving—with treatment courses ranging from one to six weeks. Since staying still can be difficult for children, sedation is an option, but it’s not always preferable—patients cannot eat for eight hours before sedation, and it can lengthen a child’s visit by up to two hours. 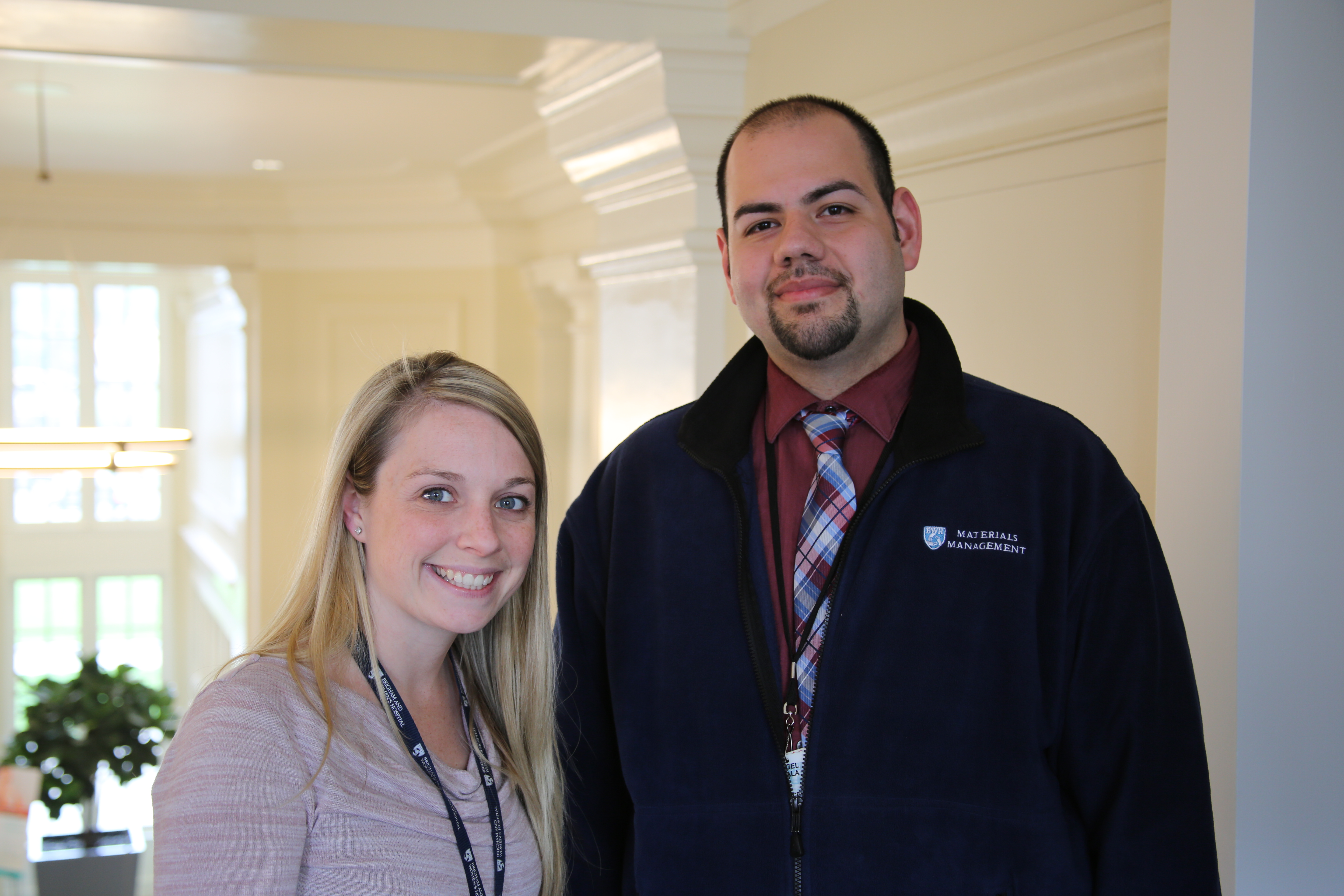 Audet reached out to Angel Ayala, senior technician in BWH Office Services, to see if it would be possible to build a mobile video projector cart that would allow young patients to pass the time during treatment by watching videos projected on the ceiling.

Although the request was an unusual one for the Office Services team, Ayala was determined to fulfill it. He immediately reached out to a few departments at BWH for assistance, including Engineering, to help build the cart. Just a few days later, he wheeled the completed cart down to Radiation Oncology.

“It felt really good to be able to build something that’s now being used to make young patients smile,” Ayala said.

Before a radiation appointment, Audet sets up the computer and projector with the TV show, movie or online video clip that a patient wants to watch and then wheels the cart into the room. Offering this small amenity has helped to ease anxiety of parents and children in a big way, she says.

“It’s a goal for a child life specialist to get kids through radiation without sedation,” Audet said.

Audet and Ayala were recognized by BWHC President Betsy Nabel, MD, for their creative approach to compassionate care at a recent Brigham Way luncheon.

After receiving one of her last treatments on June 30, Angel walked back to the waiting room. Her family thanked everyone who had a part in creating the mobile video projector cart.

“It was a very emotional moment for me when I learned that Angel could watch a video during radiation and wouldn’t need to be sedated,” said her mother, Fifi Egigu, explaining that Angel needed to be sedated when she first started treatment. “I hope this helps lots of other parents and children as well. The projector has made a difficult situation a little easier for us.”

Before going home for the day, Angel read a letter to her mother and sister that she wrote about being able to watch her favorite show during her appointments at BWH.

“I like watching ‘Doc McStuffins’ during radiation because it makes it less scary and makes me feel like I’m not alone,” Angel said. “I feel like I have a friend nearby.”