Construction crews lowered several tons of radiology imaging equipment into the Brigham Building for the Future earlier this month as “Big Iron” MRI scanners were delivered by crane to the new building.

The four heavy magnets that form the core of the new MRI scanners, along with a CT scanner, were installed in the imaging suite on the building’s lower level. Equipment for eight digital radiography rooms and two fluoroscopy rooms were installed in a central suite on the second floor, where clinics for Orthopaedics, Rheumatology and other specialties will be located.

Big Iron is a slang term that refers to large, heavy equipment. It gained popularity in the 1960s as a nickname for mainframe computers, but the health care industry now uses it to refer to big devices such as MRIs.

The hospital’s Big Iron move occurred over two weekends—July 7 to 9 and July 16 to 18—with oversight from BWH Real Estate, Planning and Construction and members of the Department of Radiology.

Set to open in October, the building was designed so the initial deliveries could be completed with ease, and so that future upgrades will be manageable as new technologies become available. 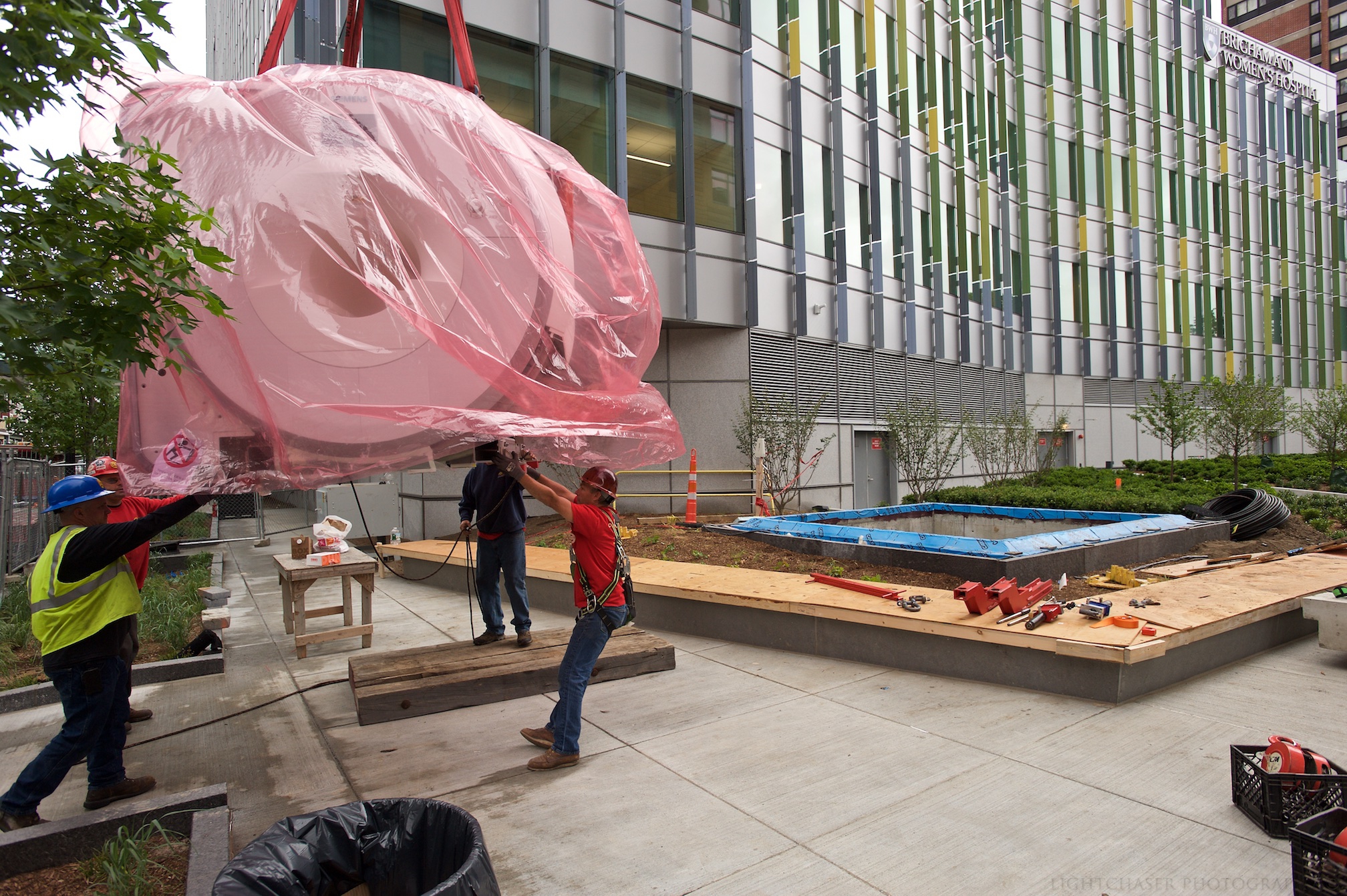 A 3.0 Tesla MRI scanner is hoisted toward the access shaft leading to the lower levels of the BBF.

“In our older buildings, it was often expensive and challenging to move large imaging equipment in and out as technology advanced,” said Brian Chiango, RT, MBA, executive director of Radiology. “The new building was designed in a way to facilitate the quick delivery, removal and replacement of heavy scanners. This will save money now and in the future, allowing BWH to remain on the leading edge.”

Working with Boston architecture firm NBBJ, the hospital built a large “hoistway,” or shaft, in the sidewalk that provides access to a wide, underground corridor that wraps around the imaging suite. Devices such as the MRI magnets, the largest of which weighs over 22 tons, can be lowered by a crane down the hoistway onto a platform capable of supporting more than 50 tons of equipment. The platform can be maneuvered down the corridor, guided into the imaging rooms through removable panels and settled onto floor mounts.

These innovative structural features—the access corridor, the hoistway and the removable wall panels in the imaging rooms—were the result of the close collaboration among radiologists, administrators, engineers and architects during the design process, led by the BWH Real Estate, Planning and Construction.

“The new building has some unique elements, including the imaging floor access infrastructure,” said Lani Kuzia, project manager for the BBF. “These features saved both time and money for the installation of the magnets while also minimizing disruption to the neighborhood and local traffic.”