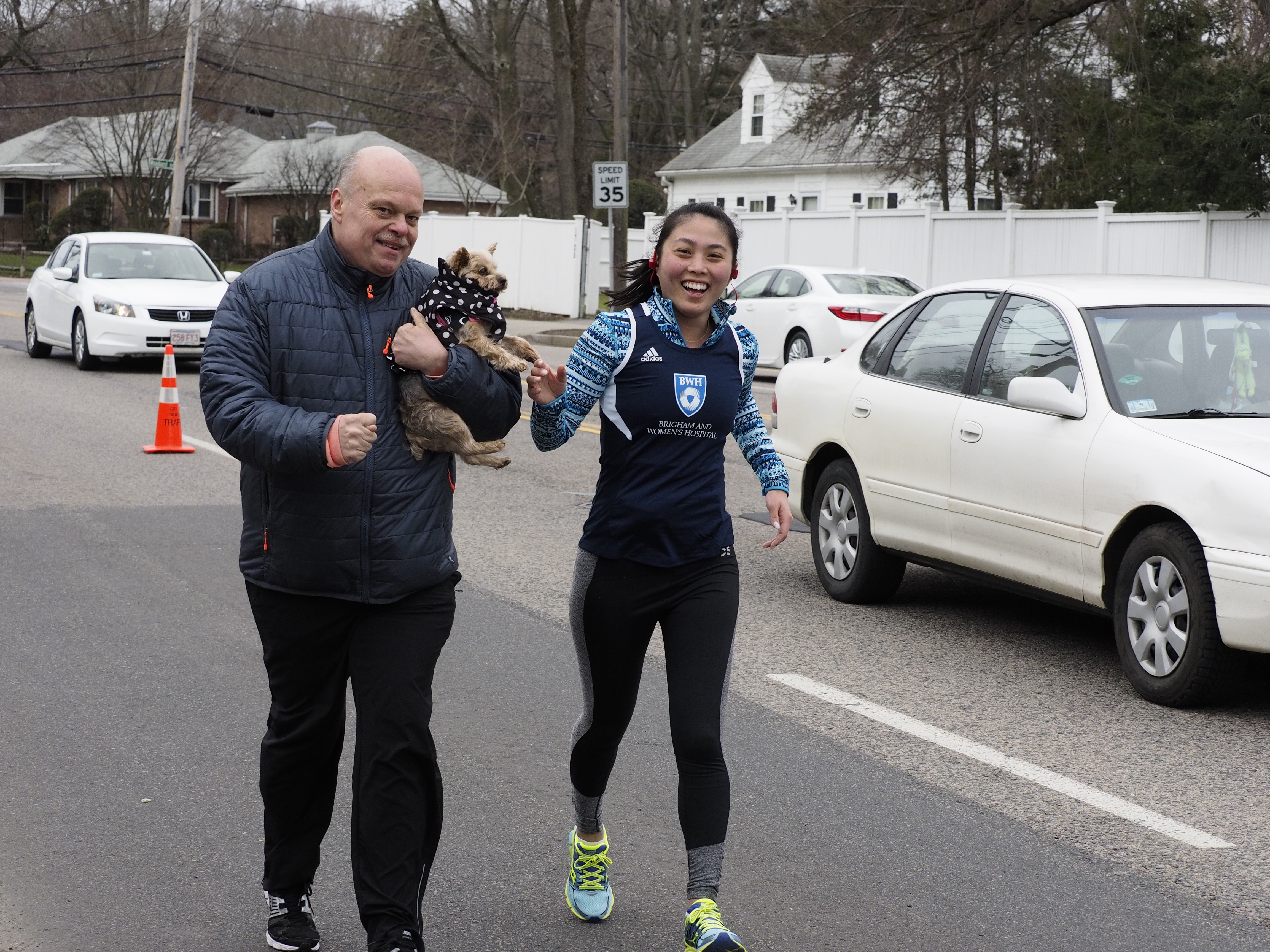 Ashley Buckley, a supervisor in Patient Access Services, ran on BWH’s Life.Giving.Breakthroughs. Marathon Team in honor of her two grandfathers, both of whom received their care at BWH.

“That was a proud moment for me,” said her father, Leo Buckey, Jr., executive director of Business Operations for Patient Care Services.

That isn’t the only thing about Ashley that makes him proud. Leo, who has been at BWH for 20 years, says he is thrilled to see his daughter pursue a career in patient care and follow in his footsteps by working at the Brigham.

“Ashley is a caring professional,” Leo said. “I’ve seen her in action; I walk by the front desk and I can see how calm she is in her demeanor. That’s what patients and families need. She makes them feel welcomed and comforted in a very safe environment, which I think is critical.”

Ashley, who started volunteering in the NICU 12 years ago, has worked at the hospital for nine years. “As soon as I started, I knew I wanted to interact with patients and be the person who welcomes and comforts them,” she said. “I ultimately wanted to make a difference in their experience here.”

Ashley and her father often commute together. They also occasionally work closely together, particularly during snowstorms. “It’s a time when our paths cross and we’re here stepping up to the plate, helping patients and supporting staff when they really need it,” says Leo. 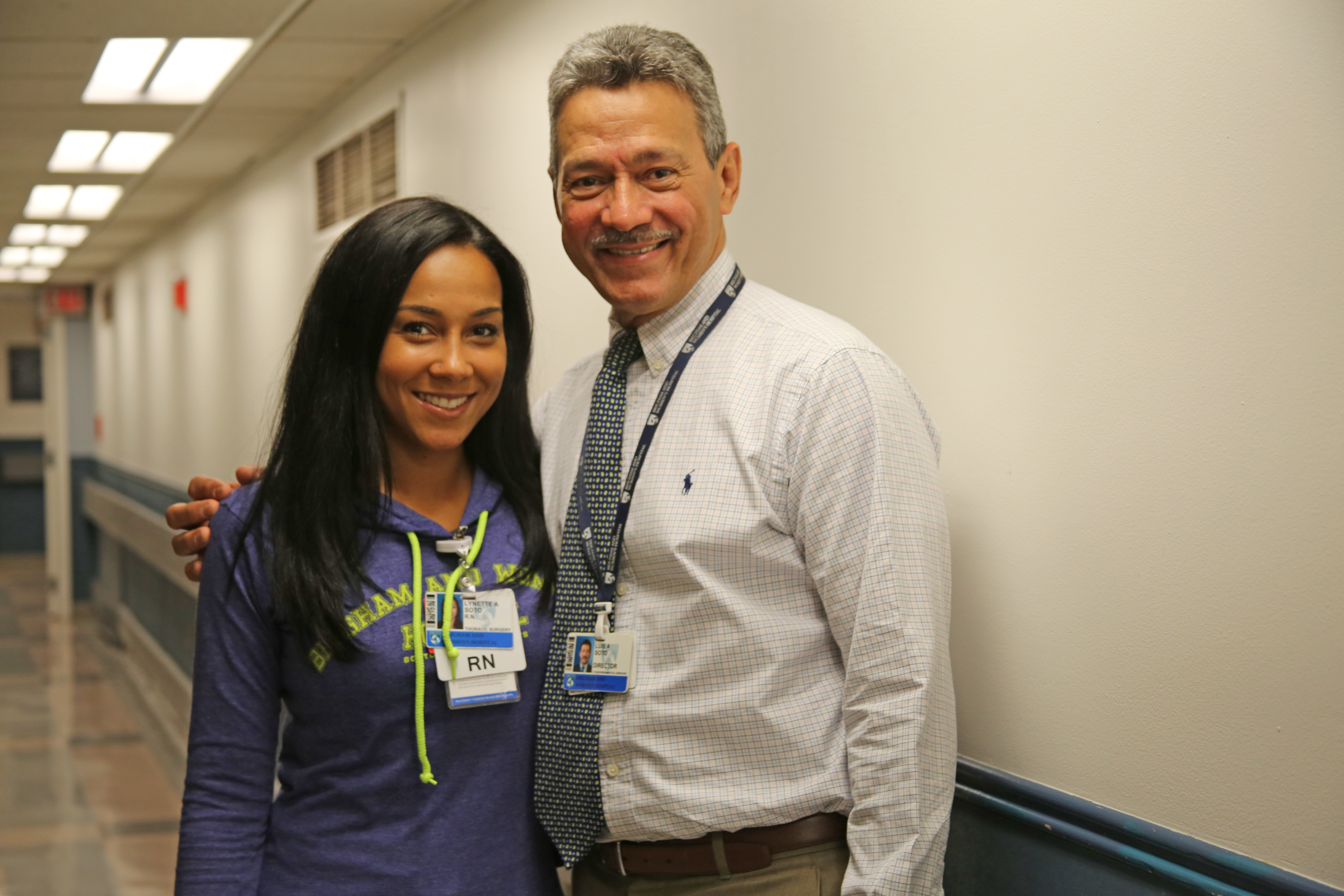 Luis Soto, director of Environmental and Central Transport Services, has been at BWH for 35 years. During his time here, nothing has made him happier than watching his daughter, Lynette Soto, a nurse in the Neuroscience ICU, work and grow at BWH herself.

“I’m very proud of Lynette. She always comes to me for advice, and most importantly, listens to me,” he joked. “My wife and I are very proud of her, especially with all she’s accomplished.”

Lynette says her father was a huge influence in helping her decide on her career path. Luis explained that, at first, his daughter was focused on pursuing a degree in computer science and could not picture herself as a nurse. But while she was in college, Lynette had a change of heart.

“My dad was right all along. I wanted to interact with people and help take care of patients,” she said. “He motivated and inspired me to become a nurse. He was right by my side as I worked to get my degree.”

To this day, Luis keeps a folder full of Lynette’s nursing report cards and still shows them to his coworkers to illustrate how proud he is of his daughter. “He brags about me more than I do!” she laughs.

Lynette, who works night shifts at BWH and teaches students at MCPHS University, is also pursuing her doctorate in nursing at Sacred Heart University. She says she still looks to her father for advice on building her résumé and working toward leadership roles in the future.

“My father’s guidance has been valuable to me as I continue to grow in my career. He knows the hospital, the system and the culture of the Brigham, and he helps keep me motivated toward my goals,” said Lynette. 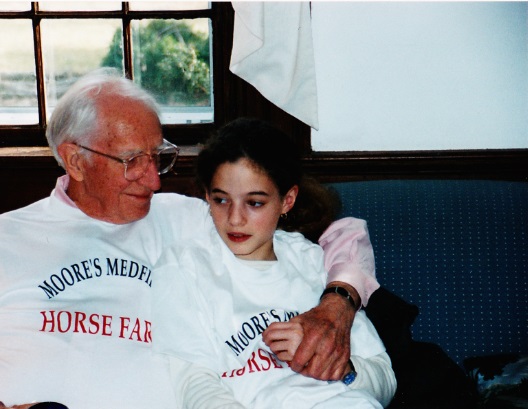 A young Alessandra Moore and her late grandfather, Francis Moore

When Alessandra Moore, MD, began her surgery residency at BWH in 2014, she represented the third generation of surgeons in her family. Alessandra, who goes by Alex, followed in the footsteps of both her now late grandfather, Francis Moore, MD, former chief of surgery at the Peter Bent Brigham, who died in 2001, and her father, Francis Moore, Jr., MD, the current chief of general surgery.

Under her grandfather’s leadership, a surgery team led by Joseph Murray, MD, performed the world’s first successful human organ transplant in 1954, among many other achievements. Alex’s father worked on a team that has been recognized for advancing surgical care both nationally and globally as well.

From years of seeing her father and grandfather in careers they loved, Alex says she had always wanted that type of job for herself. “I wanted to love what I did for a living, and I wanted to help people,” she said.

When interviewing for residency programs, Alex considered many options but ultimately knew the Brigham was the right choice.

“I loved all the residency programs I visited, but at the end of the day, BWH was where I fit best,” she said. “Being here is meaningful in a very personal way.”

Although she has big shoes to fill, Alex says her grandfather’s and father’s reputations at the Brigham are an inspiration to her. “They showed me what I’m capable of,” she said.