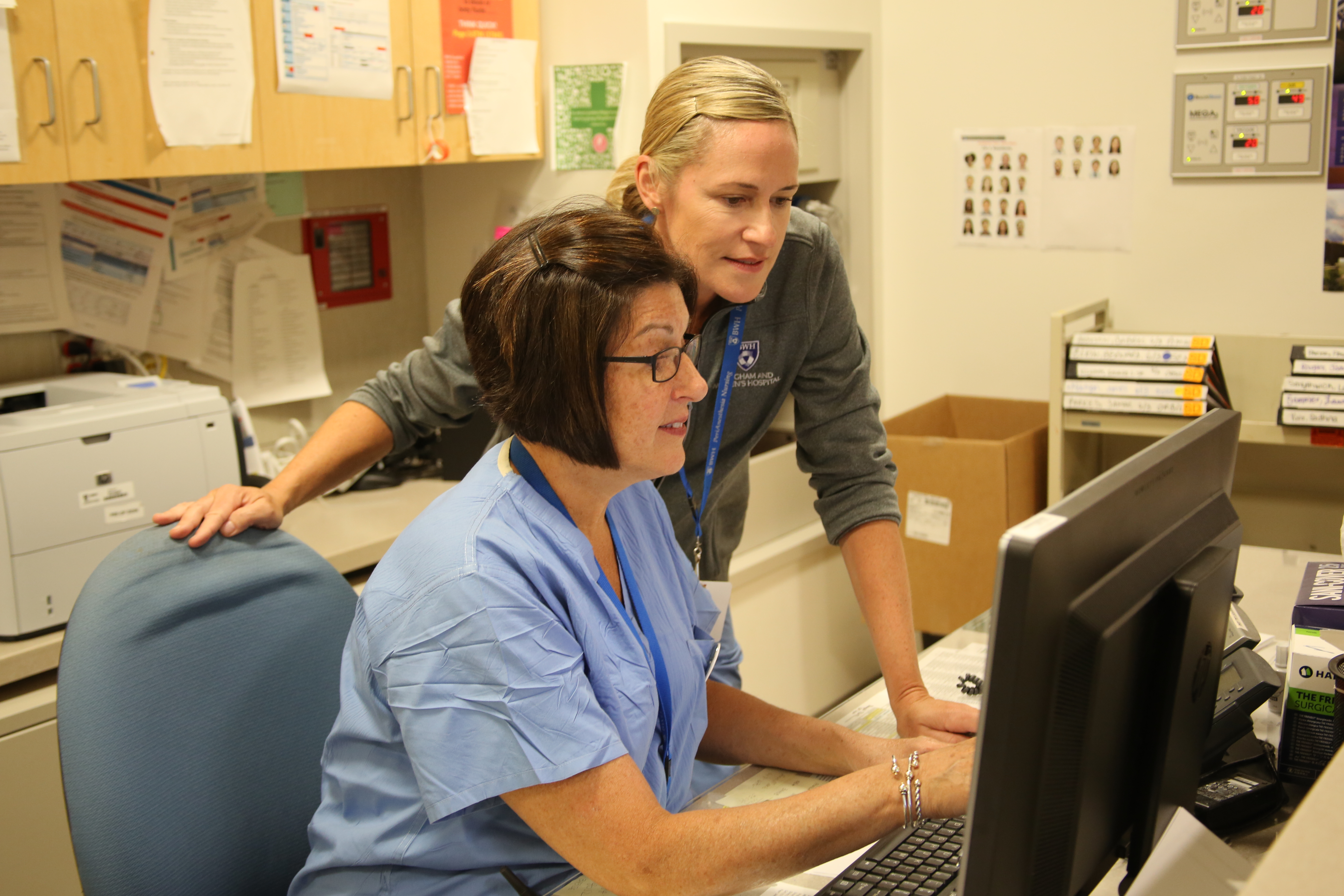 “The past year had its challenges, but we’ve made tremendous progress,” said Adam Landman, MD, MS, MIS, MHS, BWHC CIO and vice president of IS. “Our focus going forward is to upgrade Epic, improve user support and training, enhance Epic In Basket and reporting, and fully integrate Radiant, Epic’s radiology module, into our system.”

BWH Bulletin recently spoke with several employees to hear about some of the highlights and challenges of the past year.

John Solman, BSN, RN, recalls the exact moment he realized how powerful Partners eCare could be in improving patient care.

It was early June—the week Epic went live—and Solman, a staff nurse on Tower 10BA, saw in the status board that a patient was being transferred to BWH from Brigham and Women’s Faulkner Hospital. Solman could review the patient’s chart and medication in advance—something he hadn’t been able to do in such detail before.

“That’s when it struck me that there’s something here that’s going to lead to better patient outcomes,” he said.

Solman, who co-chairs the Nursing Informatics and Clinical Innovation Committee, was a designated subject-matter expert and
super-user prior to the launch of Partners eCare, so he had a lot of exposure to the system before it went live. It gave him a different perspective on the rollout.

“Overall, I think it’s been a dramatic improvement,” Solman said. “We have to recognize the enormity of what we were undertaking. There were growing pains, but the support team was very responsive to the critical issues that were developing.”

When Amanda Moment, LICSW, and her co-workers attended Partners eCare training last year, they got an initial walkthrough but not one that met their needs as social workers.

That was when Moment and her co-workers decided to take training into their own hands. They came together and customized templates and code sheets for social workers, in addition to writing their own instruction manual for the new system.

“We did a tremendous amount of work to make the system fit our processes,” said Moment, a super-user for her department.

The hard work paid off. “The ability to look at any of my patients’ notes at any point is incredible,” she said. “I don’t have to be on the floor, reading a paper chart. The ease of accessing other providers’ documentation is one of the biggest plusses.”

Still, some barriers remain. Moment and her team haven’t had much success in analyzing trends with Epic’s reporting features. They also see challenges around locating, documenting and sharing the most up-to-date information about a patient’s health care proxy designation, code status and other high-risk indicators in such a large system.

“We are actively working with Epic on these issues, but they are by no means resolved,” she said.

David Rubins, MD, a second-year resident in General Internal Medicine and Primary Care, looks back on the first year of Partners eCare as a challenging one.

Rubins was apprehensive about the transition, as he was used to the homegrown, legacy applications he was trained on: BICS and LMR, which went live at BWH in 1993 and 2006, respectively.

Using Partners eCare has been easier since the implementation last year, Rubins says. He suspects it will be even smoother for new interns.

“A lot of the difficulties we ran into initially revolved around the transition,” he said. At that time, some medications were missing from a patient’s history or showed the incorrect dose, Rubins said. That led to a lot of manual re-entry of data.

“Any time you’re re-entering things, it takes extra time and there’s a risk of putting in the wrong thing,” he said.

Gone are the days of having to decipher a colleague’s handwriting in a patient chart, says Kristen DeVoe, LICSW, a social worker in the Heart Transplant and Mechanical Circulatory Support Program.

“It’s easier to navigate now—everything is in the computer—so you don’t have to find the paper chart, look through notes and try to read people’s handwriting,” she said.

DeVoe, a super-user who helped customize the Partners eCare platform for colleagues, says she appreciates not only having patient information available electronically, but also having it accessible in a system that can simplify data input.

“A lot of us use the same phrases over and over again, and in Partners eCare, you can create a ‘smart phrase,’” she said. The customized feature suggests commonly used phrases as a user starts typing them, similar to the auto-fill feature on smartphones.

There’s one thing that Rajesh Patel, MD, MPH, doesn’t miss about the pre-Epic era: toggling between multiple applications to piece together a patient’s history.

“There wasn’t an integrated electronic medical record system,” said Patel, a hospitalist in the Department of Medicine. “You would sit down at a computer and have to open up three, four or five different programs in order to collect information on a patient. I was excited to get everything in one place.”

While Patel says he is reaping the rewards of a more streamlined system, he acknowledges that it didn’t happen overnight.

“It’s important to keep in mind that it was an ambitious undertaking to implement Epic across every clinical setting at the Brigham, and the anxiety and concern people had was valid,” Patel said. “But I think we’re over that first hump and things are stable. Now, we need to focus on concrete ways to refine the product.”

Things move fast in the Operating Room and the Pre- and Post-Anesthesia Care Units (PACUs). Patients are cared for by several teams in a relatively short amount of time, making it essential that clinicians have a complete picture of each patient.

Before Partners eCare, that picture was fragmented, says Theresa Jasset, MSM, RN, CNOR, program director for Perioperative Nursing Informatics. Patient history used to be scattered throughout legacy systems and paper records, but Partners eCare has given care providers in the OR and PACUs a comprehensive view in one interface.

As with any big operational change, it took time for employees to get used to Partners eCare, she said.

“We have sick patients and things here move quickly, which can add to the stress of learning to navigate a new system,” Jasset said. “But that stress is decreasing every day.”