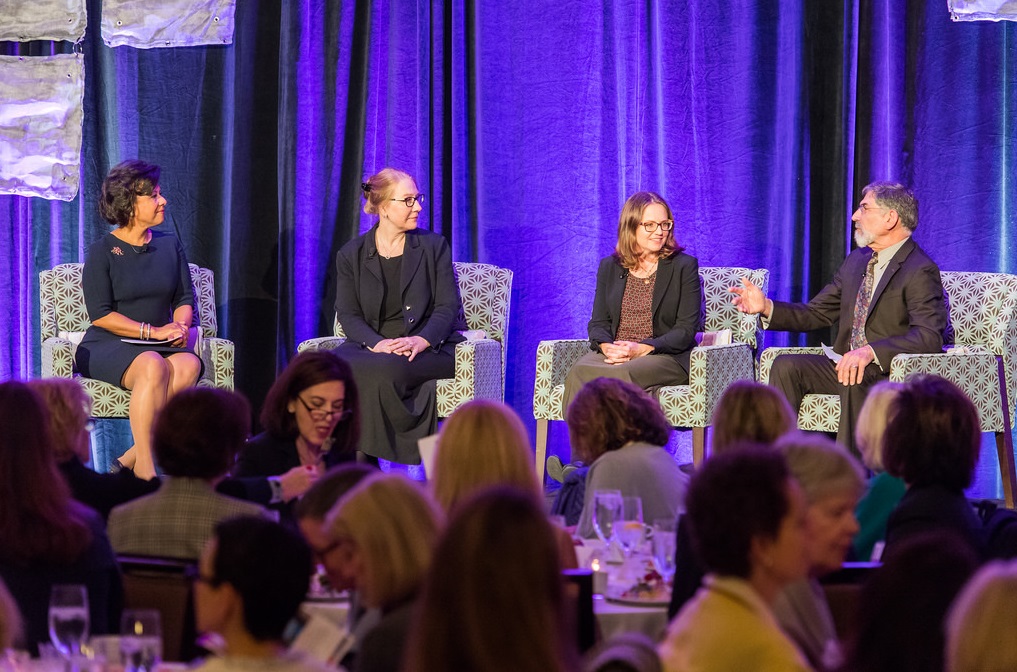 As a young doctor completing her residency at BWH in the late 1980s, Paula A. Johnson, MD, MPH, was unaware there was an essential element missing from the study of medicine: Women were underrepresented in clinical trials and research. This was a fact that had historically gone unrecognized, Johnson told a packed room at the 11th annual Women’s Health Luncheon on May 6.

“When I began my training at the Brigham 30 years ago, women’s health in our country was in a very different place,” said Johnson, executive director of BWH’s Mary Horrigan Connors Center for Women’s Health and Gender Biology and chief of the Division of Women’s Health. “The lessons I learned then about heart disease, neurologic disorders, autoimmune disease and so many others were based predominantly on studies conducted almost exclusively on men.”

The luncheon was Johnson’s last as the head of the Connors Center. She leaves BWH this summer to become president of Wellesley College.

Thanks to the work of Johnson, the Connors Center and its supporters, local and national awareness of the gender disparity in research has grown. Subsequently, researchers and clinicians have learned more about how disease and the efficacy of treatments differ between sexes.

“We’ve made women’s health into a topic of national significance,” Johnson said. “We’ve influenced legislation requiring that women be included in biomedical research, and we’ve fueled critical research leading to advancements in gender-based care and public health policy. We’ve committed ourselves to making sure that the health of our mothers, daughters, sisters, friends and ourselves is not left to chance.”

The fight is not over, however. Heart attacks are the leading cause of death for women, but only 30 percent of cardiovascular study participants today are women. Statistics like these prompted the launch of “Us Plus One,” an awareness campaign to recruit new members to the Women’s Health Board of Advocates, a volunteer organization that supports the Connors Center. A brief video, available at usplusone.org, explains why this movement is so critical to ensuring women’s health is not left to chance.

“We need to be confident that health care decisions for diagnoses, medications, medical devices and treatments have been designed for us,” said Karen Zahorsky, chairwoman of the Board of Advocates, who announced at the luncheon that Johnson would be the first to join the board.

Pain is one of many areas where differences in diagnosis and treatment should be different for men and women, according to experts. This topic, “Power Over Pain,” was the focus of the luncheon’s panel discussion with three BWH experts: Elizabeth Loder, MD, MPH, chief of the Divison of Headache and Pain; Kristin Schreiber, MD, PhD, an anesthesiologist and clinical pain researcher; and Gary Strichartz, PhD, MDiv, FRSM, director of the Pain Research Center.

One example of this disparity is seen in fibromyalgia, a disorder causing widespread pain that is more common in women, said Schreiber. The lack of an easily identifiable source, such as an inflamed joint, and its predominance in women have led some in the medical community to take it less seriously, she added.

“The fact that fibromyalgia has been diagnosed predominantly in women has made it a second-class pain diagnosis,” Schreiber said. “For a long time, some physicians didn’t even believe in it. However, we’ve been seeing real biomedical differences in people who have fibromyalgia—these people actually do feel more pain.”

Some research has shown that if a healthy person and someone with fibromyalgia are given the same amount of pain stimulus, Schreiber added, there is more activation in the pain areas of the brain—especially those that have to do with the emotional reaction to pain—in the person with fibromyalgia. “And that activation lasts longer than in healthy people,” she said.

As Johnson summarized the Connor Center’s contributions to the field of women’s health since the last luncheon in 2015, she highlighted a report from the U.S. Government Accountability Office assessing women’s inclusion in National Institutes of Health-funded clinical trials. The report, which was catalyzed by the center’s work, recognized that much more needs to be done to ensure women are sufficiently represented in research of diseases that affect both men and women. Johnson called it the most significant shift in policy in 20 years.

“None of this progress would be possible without the dedication of the people sitting in this room,” she said. “I am extraordinarily proud, and I know that with the incredible foundation and community we have built, you will be a champion of this work for decades to come.”