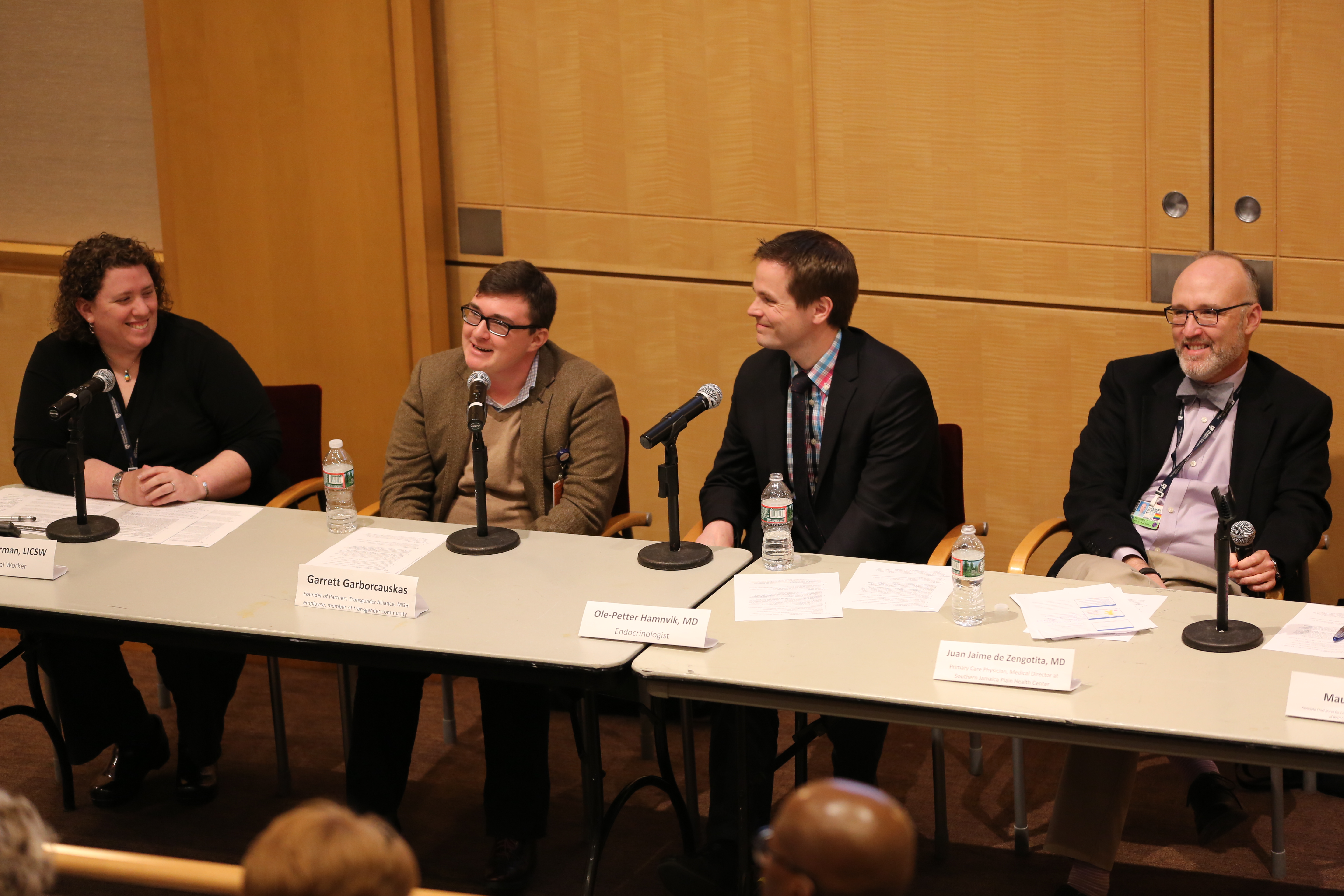 A harrowing statistic came to light several years ago: Nearly one in five transgender people in the United States has been refused medical care due to their gender identity or expression, according to a survey by the National Center for Transgender Equality and the National LGBTQ Task Force.

And while transgender equality has become a more visible national priority since the 2011 release of that report, “The National Transgender Discrimination Survey,” transgender patients and advocates who spoke at a recent BWH event say there is still plenty of room for progress.

The event, held May 4 in Bornstein Amphitheater, was jointly organized by the BWH/BWFH LGBT & Allies Employee Resource Group and BWHC’s LGBTQ Patient and Family Advisory Council. Its goal was to provide a nonjudgmental venue for education and awareness, said Maureen Fagan, DNP, MHA, executive director of the Center for Patients and Families and associate chief nurse for the Center for Women and Newborns.

“We are on the journey of learning how we can best meet the needs of all our patients,” said Fagan. “We need guidance, and we’re very open to that as an institution.”

Seemingly well-intentioned comments can sometimes make transgender patients feel singled out, explained Garrett Garborcauskas, an MGH employee and founder of the Partners Transgender Alliance. As a patient, Garborcauskas said there is no need for clinicians to mention gender identity or expression unless it’s directly related to the care being provided.

“I’ve seen doctors who say, ‘You’re my first transgender patient,’ and I have no idea how that’s relevant for something like an eye exam,” he said. Other times, curious clinicians have asked Garborcauskas questions about medical care regarding his transition, despite having no relevance to the reason for his appointment.

To care providers, such comments may seem like friendly conversation or an attempt to acknowledge a patient’s gender identity in a positive way, but they can often have the reverse effect—calling undue attention to otherness. In those situations, Garborcauskas said he struggles to respond in a way that won’t create an awkward situation that detracts from the issue at hand.

In response, clinicians in the audience asked how they can best signal their support to transgender patients and help them feel more comfortable at BWH.

“Even having a little rainbow sticker on your nametag helps,” said panelist and endocrinologist Ole-Petter Hamnvik, MD. “I’ve had several patients point it out.”

Panelists also recommended asking all patients their preferred pronouns (for example, he, she or they, among others) during patient check-in or registration to avoid stereotyping and to ensure that no one feels singled out. The suggestion resonated with attendee Ellen Steward, manager of Client and Physician Relations.

“One takeaway for me is that there is a real need for training for staff and clinicians who will be the first point of contact regarding what information they should ask for and how to ask for it,” Steward said. “I see that as so important if we want BWHC to be LGBTQ-friendly.”

Health care providers are already accustomed to asking patients a litany of questions about everything from alcohol intake to seatbelt use to domestic violence concerns. Similarly, posing a broad question—such as, “Is there anything about your sexuality or gender you’d like to discuss today?”—might be a natural opening for clinicians to empower transgender patients to feel safe coming out. It also creates an opportunity to encourage any patient to discuss sexual orientation, reproductive health or similar topics, said panelist Carrie Braverman, LICSW, of Social Work.

Employees who would like a rainbow sticker for their nametags may visit Meredith Solomon in the BWH Medical Library. To join the BWHC LGBT Employee Resource Group listserv, email bwhclgbt@partners.org.