There’s a reason many people prefer to enjoy the Boston Marathon from the sidelines: Running 26.2 miles is a demanding endeavor that requires months of training through the winter and, for charity runners, a significant fundraising commitment.

While marathon running is not for everyone, other races can give runners that same euphoric feeling of crossing the finish while helping a cause—albeit with a more manageable commitment. BWH employees participating in the 2016 Boston Athletic Association (B.A.A.) 10K race, sponsored by BWH this year, say the event is far more accessible to runners—and even non-runners—who may feel intimidated by the training routines or fundraising minimums of larger races.

“You can run a 10K in one hour, or you could run it in two; there’s no rush and no pressure,” said Giorgio Giatsidis, MD, a researcher in the Department of Surgery and a plastic surgeon, who is running on the Gillian Reny Stepping Strong team. “My goal is to get to the end—it doesn’t matter to me how long it takes.”

The 6.2-mile race is on Sunday, June 26. Its route loops through Back Bay, starting and ending in the Boston Common.

Giatsidis had never tried running until last year and almost quit when he couldn’t finish one mile on his first run. But he stuck with it, and last month he completed the Boston Marathon.

To help novice and even first-time runners get ready for race day, the B.A.A. offers several training programs that can help new runners get ready for a 10K in just a few weeks, says Jonathan Hawkes, a member of the BWH Development Office who formed a team to support the Ann Romney Center for Neurologic Diseases at BWH. Because of these resources, the 10K felt like a far more realistic goal than the Boston Marathon.

“I’ve had a number of colleagues run the Boston Marathon, and I see how it brings people together,” Hawkes said. “There’s a real sense of community at events like these, and I want to be part of that experience.”

Elizabeth Matzkin, MD, an orthopedic surgeon and chief of Women’s Sports Medicine, says that with the right training plan, a 10K is doable for a healthy person who has never run a race before. She notes that runners should increase mileage and distance slowly each week, and ensure they’re meeting their nutritional needs to avoid injury during training.

“Train to finish, not for a personal record, if it is your first 10K,” advised Matzkin, who is running with “Bone” to Run, a team she organized to raise money for research and education in women’s sports medicine. “Training for a half-marathon or a marathon is a big commitment, but a 10K is a great distance for everybody.” 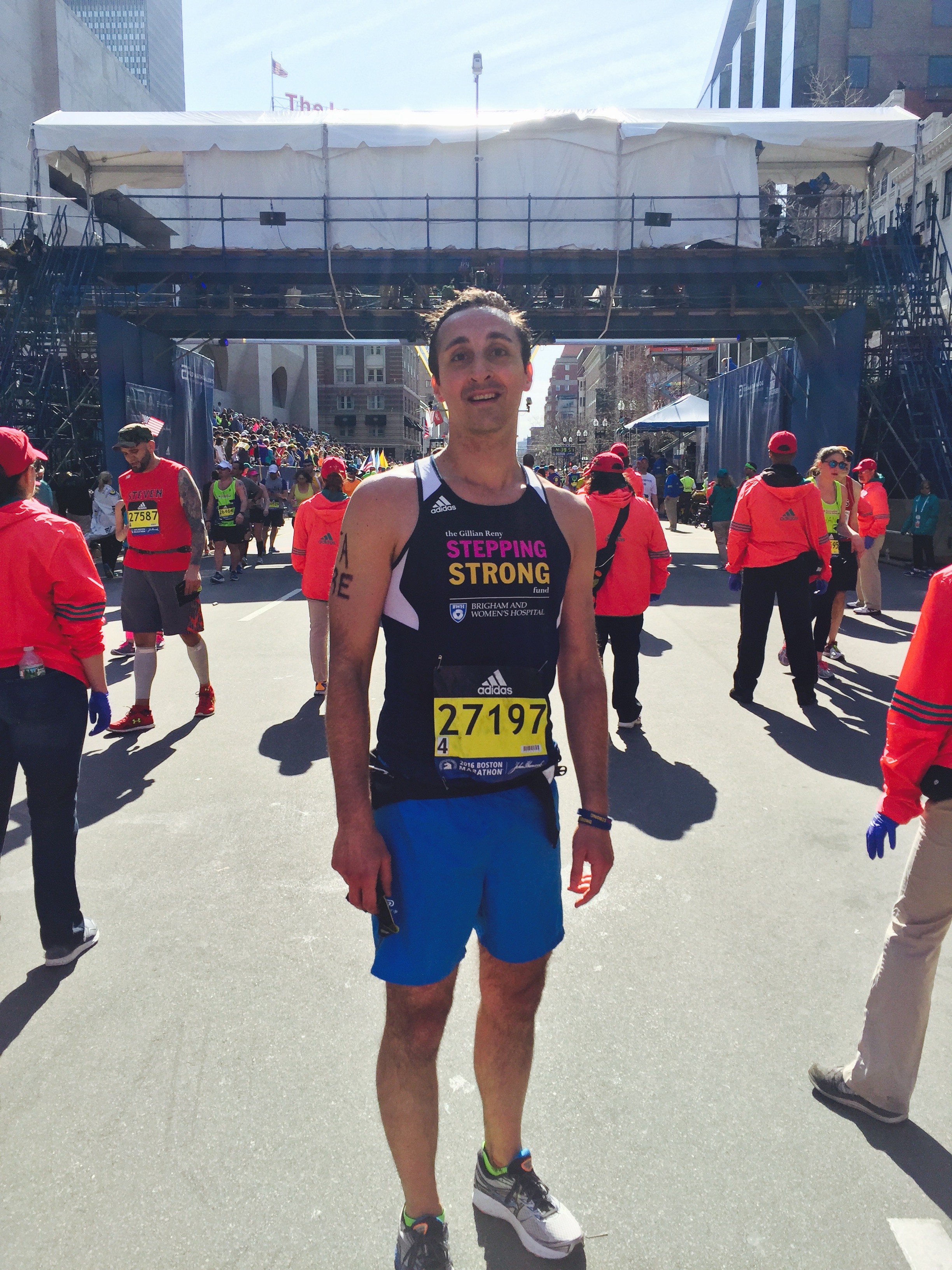 This year, BWH is the exclusive fundraising partner for the race, meaning that individuals and teams who join the BWH team will run to raise funds for the hospital. The fundraising minimum is $500, and runners can allocate funds raised to a BWH fund of their choosing, allowing them to support the life-giving breakthroughs most meaningful to them.

Giatsidis says he was initially nervous about meeting the goal but has found that fundraising is actually his favorite part of the process.

“Fundraising gives me the opportunity to reach out to a lot of people, explain why I am doing this and get their feedback,” he said. “I love the fact that I can share my motivations and passions with a lot of people I haven’t been in touch with for a long time.”

Hawkes chose to run to support the Ann Romney Center for Neurologic Diseases in honor of his grandmother, who has lived with Alzheimer’s disease for the past eight years. While his fundraising efforts are still ongoing, Hawkes says that potential runners shouldn’t be intimidated by the goal.

“Your network is larger than you think it is,” he said. “Five-hundred dollars may seem like a lot, but if you think of it in smaller increments—say, 20 donations of $25—it becomes a lot more manageable.”

To learn more or register for the B.A.A. 10K, visit www.crowdrise.com/baa10k.