For Mother’s Day, we asked BWH moms & daughters to share how their bonds have grown while working together at the hospital 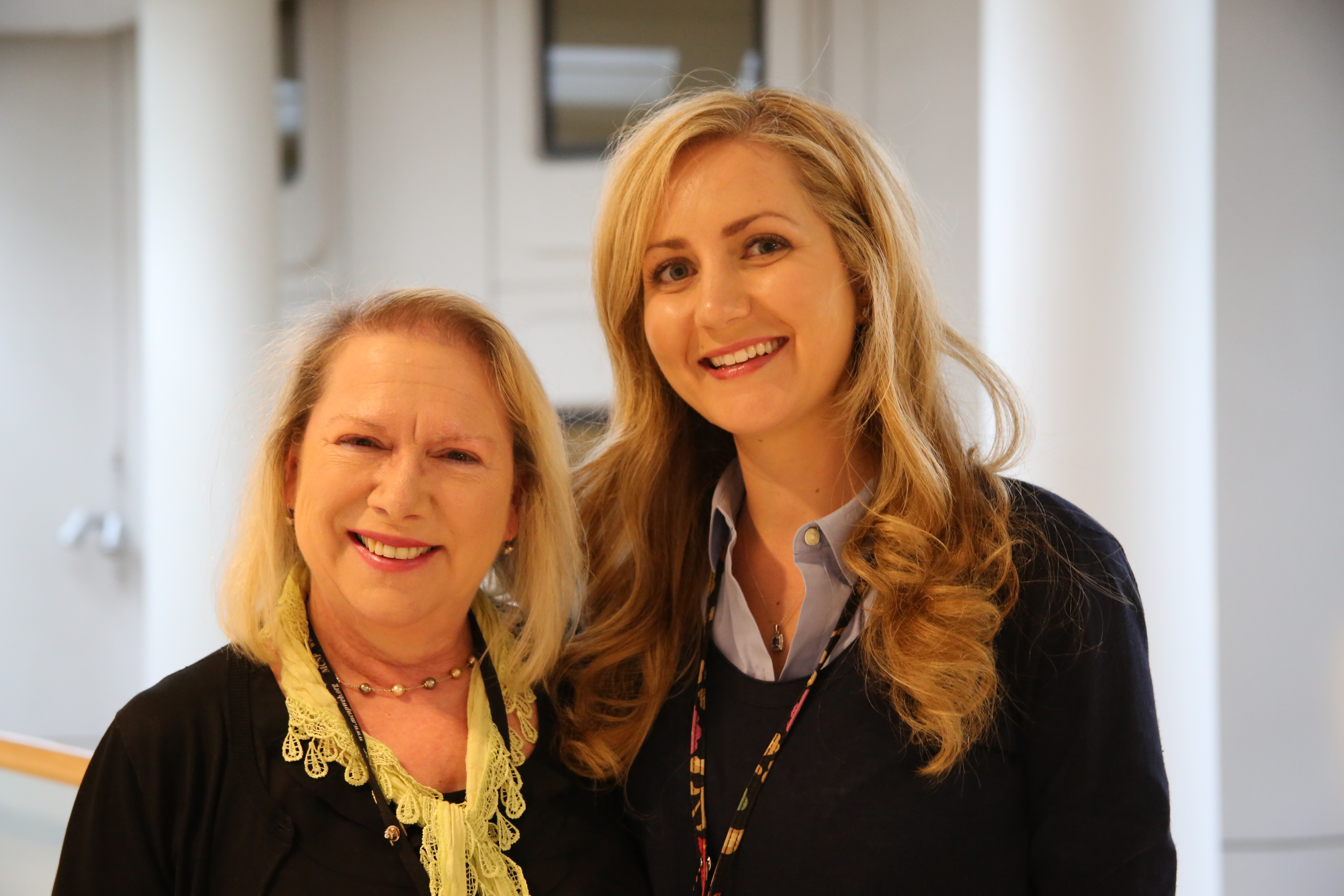 When Lindsey Sadler, began working at the hospital in 2013, she could have never imagined just how closely she would end up working with her mother in-law, Patrice Nicholas, DNSc, DHL (Hon.), MPH, MS, RN, ANP, FAAN, to help others.

Nicholas is director of Global Health Programs in the Center of Nursing for Excellence, and Sadler, a practice manager in OBGYN, had always admired her mother in-law’s commitment to mentoring young professionals. Sadler began to realize there were opportunities for Nicholas to connect with and advise medical assistants from her department who looking to advance their careers in nursing.

“When medical assistants told me they wanted to pursue a career in nursing, I immediately connected them with Patrice,” said Sadler. “They would meet, have an informational interview and talk about whether to get an RN or a BSN. Patrice continued to mentor them after that conversation.”

And the relationship goes both ways. Nicholas also directs students that she meets with to Sadler’s office when they are interested in externship opportunities in OBGYN. Inspired by her mother-in-law, Sadler became motivated to be a better mentor in her own role by actively seeking out talent and opportunities for those she works with. “It’s exciting to help people grow in their careers,” Sadler said of her experience so far.

Although Nicholas says she truly enjoys helping others grow, she notes that her daughter in-law is her “favorite mentee”. 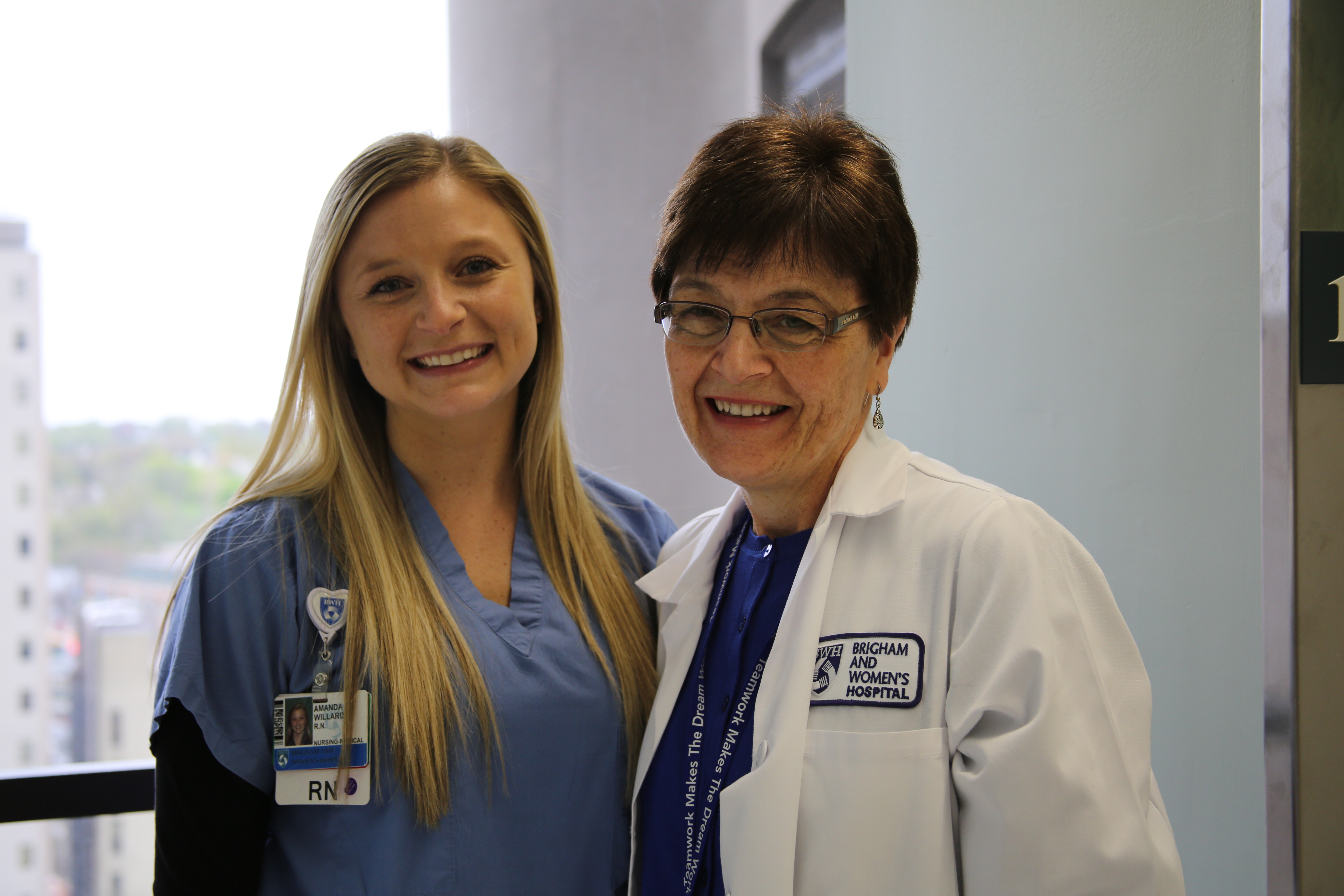 Amanda Munden, RN, always knew she wanted to be a nurse. “Both my mother and aunt were nurses. Growing up I saw how caring, nurturing and selfless they were – they constantly put others first,” Munden recalled.

“I could not be prouder that she has also chosen a career in nursing,” said her mother, Lauren Willard, RN, who has been a nurse at BWH for 35 years and currently serves as a nursing director for Gynecology/Oncology.

Although Amanda works in 14 CD and Lauren works in 12C, one patient scenario left them crossing paths in a very unexpected, but touching, way. A patient Willard developed a close relationship with emailed her when she was re-admitted to BWH and asked if she would visit. “Of course the next day I walked over to her room, only to find Amanda was in there taking care of her – they had no idea she was my daughter!” Willard said, laughing.

“The patient told me what a wonderful job Amanda was doing; it was a really special feeling to hear that. I’m very proud that Amanda chose nursing as her career and that she works here at the Brigham,” said Willard. “It’s just a good feeling for me as a mother and a nurse.” 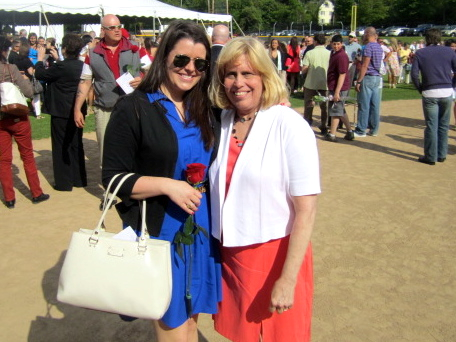 “It’s been awesome to see Laura as she has progressed from receiving her first bachelor’s degree and continued on to nursing,” said Rita McCarthy, RN, a nurse practitioner in the Diabetes and Metabolism department at BWH, and a nurse for over 35 years, about her daughter, Laura, who is now a staff nurse at BWH. “It was fun for me to hear what she was learning about in her nursing programs and how similar, and also how different, it all was from when I was becoming a nurse.”

After receiving her first degree in education, Laura soon realized that, like her mother, she wanted to pursue a nursing career. After graduating from an accelerated, 16 month program, she joined BWH and now works in the vascular and cardiac medicine unit.

Although mother and daughter work different hours, and in different areas, their shared chosen profession has created a special bond between them. “Sometimes Laura asks me questions about nursing, and it’s really fun to share my experience. She also helps me when it comes to using and understanding all the new technology! It’s a really fun exchange of information,” said Rita.

As a new nurse, Laura turned to her mother often for advice. “I could always ask her something, or get her opinion, because at one point she was in my position. She has a unique perspective and to connect with her in that way is pretty cool,” Laura said.

A BWH Family for Almost 200 Years 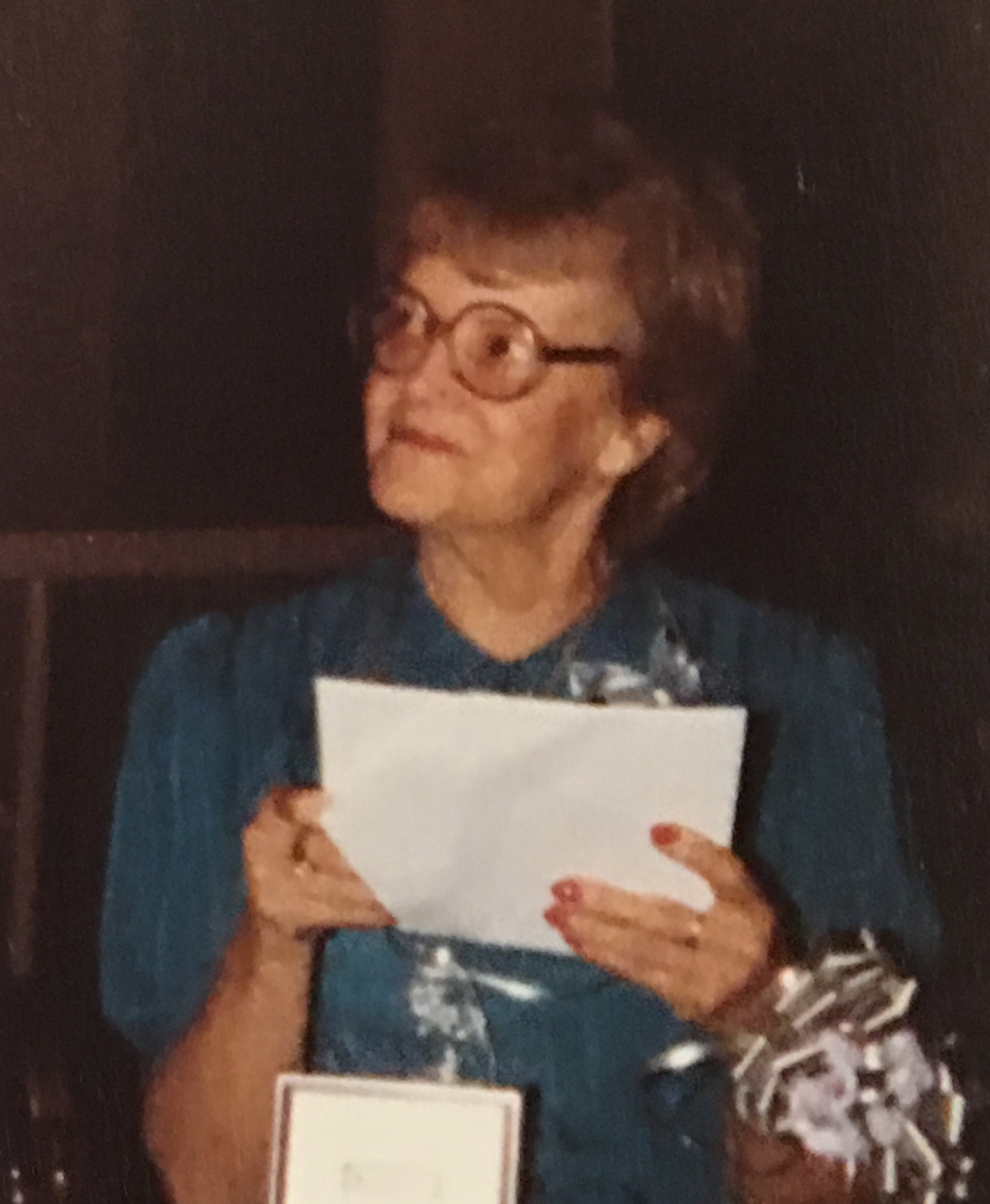 Sandy’s mom at her retirement party in 1983

At a recent holiday gathering, Sandy (Holmes) Vance and her family, who grew up in Brigham Circle, started tallying the number of years that the family has worked at Brigham and Women’s Hospital (BWH), realizing that the total approaches nearly two centuries.  “Combined, it was close to 200 years of service to BWH from just our family. When you think about that, it’s really amazing,” said Vance, a nurse at BWH.

“Our mom started the tradition,” she recalled of her mother, Sarah Holmes, who worked in the Parkway division at the Boston Hospital for Women, one of the hospitals that merged with Peter Brent and Robert Breck Brigham to form BWH, in the 1960s.  “She worked in Central Processing, putting together the surgical kits for the OR.  She worked there until she retired in 1983.” As each of her six children turned 16, she helped almost all of them secure their first job at BWH.

During his high school years, Vance’s oldest brother, Mike, worked in the hospital’s kitchen at the Parkway. “After that, my older sister Debbie started as a candy striper and got her first nursing job at the hospital after graduation in 1976.” Her sister, Deb Cotto, now 40 years later, still works at BWH, but in the abnormal Pap Smear Center. Cotto’s daughter, Elizabeth Donovan, a nurse as well, has now been with BWH for 10 years.

Then Vance followed in joining the BWH family. “My first nursing position was also at the Parkway in 1979, and then I moved over to the Tower when it opened.” She spent three years in GYN oncology before she left Boston to travel around the country, but returned in 1996 to the Center for Infertility and Reproductive Surgery. She left for a short time, returning in 2014 to BWH and works in the Center for Infertility and Reproductive Surgery where she plans to retire.

For about two years, her younger brother, Jim Holmes, worked at the hospital as a technician in anesthesia before he became a nurse. His wife, Patty Holmes, a nurse, has now been working at BWH for 20 years, now in the Shapiro Cardiovascular Center. 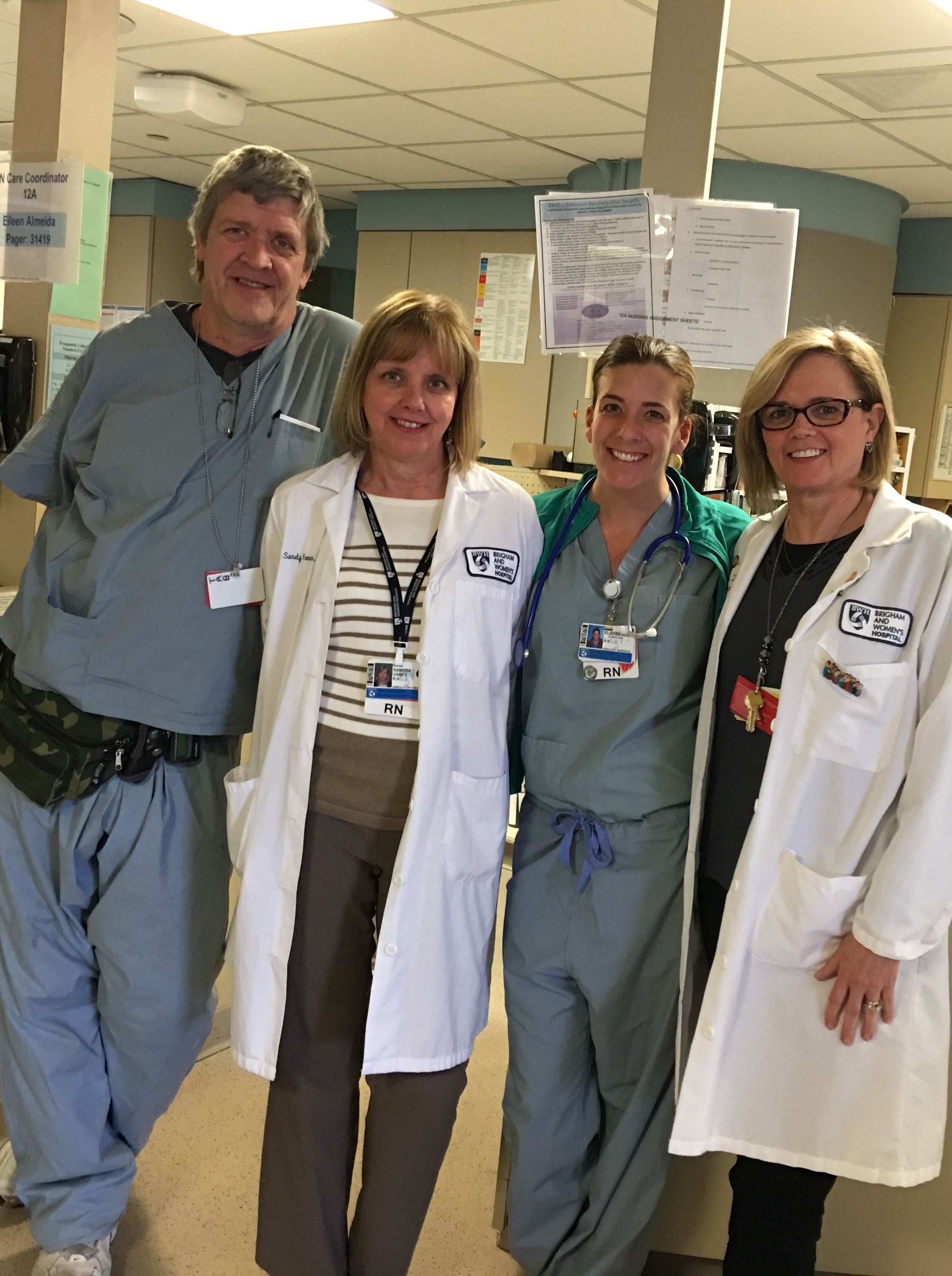 Lastly, Vance’s youngest brother, Ed Holmes, who started working at Peter Bent Brigham in 1979 at 17 years old, currently works in Biomedical Engineering as an OR equipment specialist.  “When he retires, he will have 50 plus years of service at the hospital,” she said.  His daughter, Melynda, also worked at BWH for about five years.

Vance says her mother would be proud to hear how many years her family has devoted to BWH. “There are still a few people here who remember her; it just warms my heart when they talk about her because everyone loved her,” she said.  “Whenever I meet anyone who knew her, it’s a special feeling.”

Although the family has already dedicated many years of service to BWH, Vance laughed and said, “We still have many more to go.”

One Response to “Brigham Mothers & Daughters”