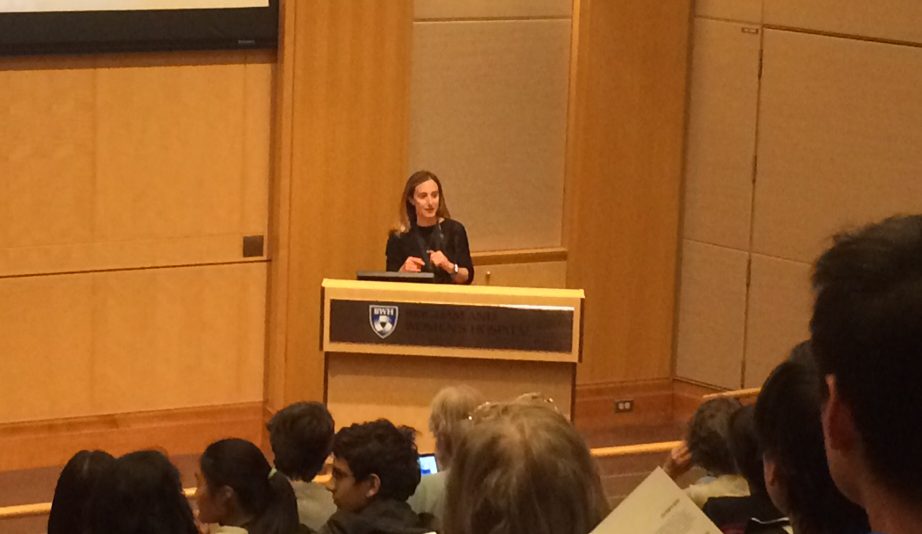 The immune system can be a force for good—protecting the body from outside invaders—but it can also have a so-called dark side. Expert speakers explored that dark side, discussing the science behind allergies to food, medication and the environment during a session at the Cambridge Science Festival in Bornstein Amphitheater on April 20. The event, titled “The Immune System Awakens: The Force Behind Allergies,” was organized by the Brigham Research Institute (BRI) and open to the general public. The BRI has participated in the Cambridge Science Festival for the last four years with the goal of raising the visibility of BWH research and researchers within the local community.

Lesley Solomon, MBA, executive director of Brigham Innovation Hub and director of strategy and innovation in the BRI, introduced the evening’s speakers and theme for the event by sharing her personal connection to the subject: Her son has a severe food allergy to dairy, peanuts and tree nuts. Solomon noted that food allergies affect 15 million Americans and approximately one in every 13 children. From 1997 to 2011, food allergies among children rose by 50 percent.

“One of my personal goals is to make sure that over the next 15-year period, that number doesn’t increase by another 50 percent,” said Solomon.

The evening’s first speaker, Andrew MacGinnitie, MD, PhD, the clinical director of the Division of Immunology at Boston Children’s Hospital, described new thinking and therapies to prevent and treat food allergies. Previously, allergists advised that children likely at risk for food allergies should not be given highly allergenic foods until age 3, but new studies now suggest that the opposite may be true: Exposure early in life to foods like peanuts may actually prevent food allergies. A study published last year from the U.K. found that children at risk of developing allergies who were regularly given peanut snacks beginning in the first 11 months of life had lower peanut allergy rates than those who were not given peanut products until age 5.

“Our understanding and advice about allergies has changed,” said MacGinnitie. “New studies on peanut allergies offer a new way of thinking about prevention.”

Paige Wickner, MD, of BWH’s Division of Rheumatology, Immunology and Allergy, then discussed the challenges of drug allergies and potential solutions. The most commonly reported drug allergy is to penicillin; at BWH, more than 220,000 patients report having a penicillin allergy. However, studies have found that 90 to 99 percent of patients are not actually allergic when tested. Through funding from BCRISP (Brigham and Women’s Care Redesign Incubator and Startup Program), Wickner and her colleagues are working on a project to safely and efficiently administer antibiotics to patients who have a history of a penicillin allergy.

The evening’s final speaker, Juan Carlos Cardet, MD, also of BWH’s Division of Rheumatology, Immunology and Allergy, studies and treats patients with asthma. One of his research projects focuses on the connection between asthma and a diet-derived chemical known as enterolactone. Enterolactone is commonly detected in people who consume a Western diet, and new research suggests that higher rates of enterolactone are tied to lower probability of asthma. Cardet and his colleagues are exploring this connection and the role that the microbes living in the gut may be playing in asthma.

“Treatment for food allergies remains an unmet need,” said Solomon. “Diagnosis is limited and so is prognosis. We’re unable to predict if and when someone will outgrow an allergy. Our hope is that by bringing more attention to food allergies, we will create more funding opportunities and bring more scientists into the field.”