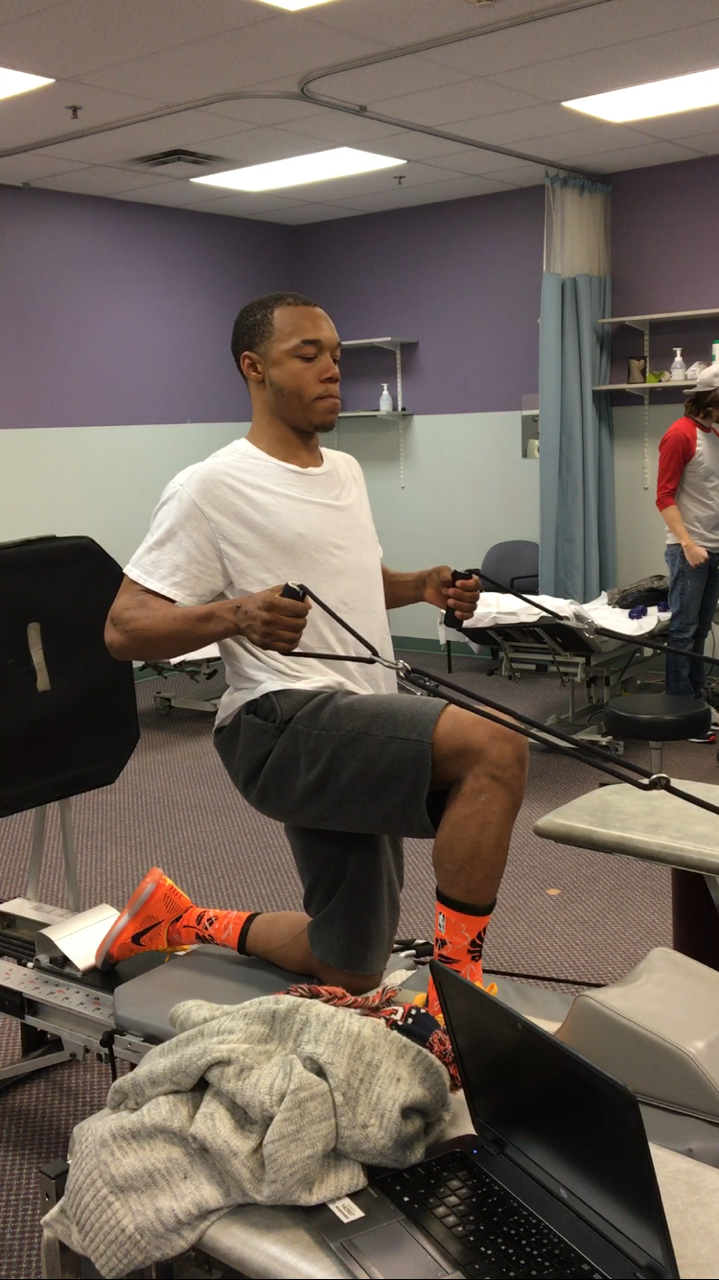 “I couldn’t believe it,” said Lu, who performed emergency spine surgery on Hodges after a car accident last summer left him paralyzed. “With his type of complete spinal cord injury, Anthony had less than a 5 percent chance of ever walking again, and he was able to step into the hospital on his own two feet. His case was a miracle.”

Last July, Hodges, the former captain of the Salem State University basketball team, was riding in the passenger seat during a car accident in Brockton. The crash left him unable to move his hands, legs or feet. He was rushed to BWH for surgery, where doctors determined that he had a complete spinal cord injury—an injury that often results in the permanent loss of function below the injury site, which in Hodges’s case was a spinal disc near the back of his neck. During surgery, which occurred just six hours after the accident, Hodges’s team removed a broken vertebra bone that was pressing on his spinal cord and replaced it with a bone graft that was stabilized with a titanium plate.

“I couldn’t move anything,” said Hodges. “I relied heavily on doctors, family members and my girlfriend to help me for everything.”

Lu, whose research is focused on spinal cord injury, said because Hodges was brought into surgery so quickly following the accident and because he was young, in good physical shape and otherwise healthy, his chances of recovering were somewhat better. Still, he was not optimistic that Hodges would be able to walk again. Lu often sees patients who recover from incomplete spinal cord injuries—where some feeling or movement still exists below the point of injury—but it is very rare to see a patient regain movement after a complete or near complete spinal cord injury.

Hodges remained paralyzed for several days following surgery, but he refused to give up hope that he would be walking and playing basketball again.

“I kept my head up,” said Hodges, who is the third of 12 children. “I have an amazing support system. There was never a point where I was alone. I’ve always been a leader for my little brothers and sisters, so I knew that losing hope and quitting were never options for me.”

After regaining feeling in his feet in the ICU, Hodges was transferred to Spaulding Rehabilitation Hospital, where he began to make even more progress.

Now, almost 10 months since the accident, Hodges is able to walk on his own and is getting stronger every day. While he still experiences some weakness on his left side due to nerve damage, he’s able to jog again. He goes to the gym as often as possible, attends physical therapy weekly and has reconnected with his basketball trainer. He said he won’t stop reaching for his goal of playing on the team when he returns to Salem State this fall for his final year of college.

“The Brigham was very good to me,” said Hodges. “I appreciate all that Dr. Lu and the care team have done for me. They got me back on my feet again.”

Hodges has already returned to the basketball court to shoot hoops with his friends: “I had a basketball in my hands and was surrounded by friends and family, and in that moment I felt complete again.”