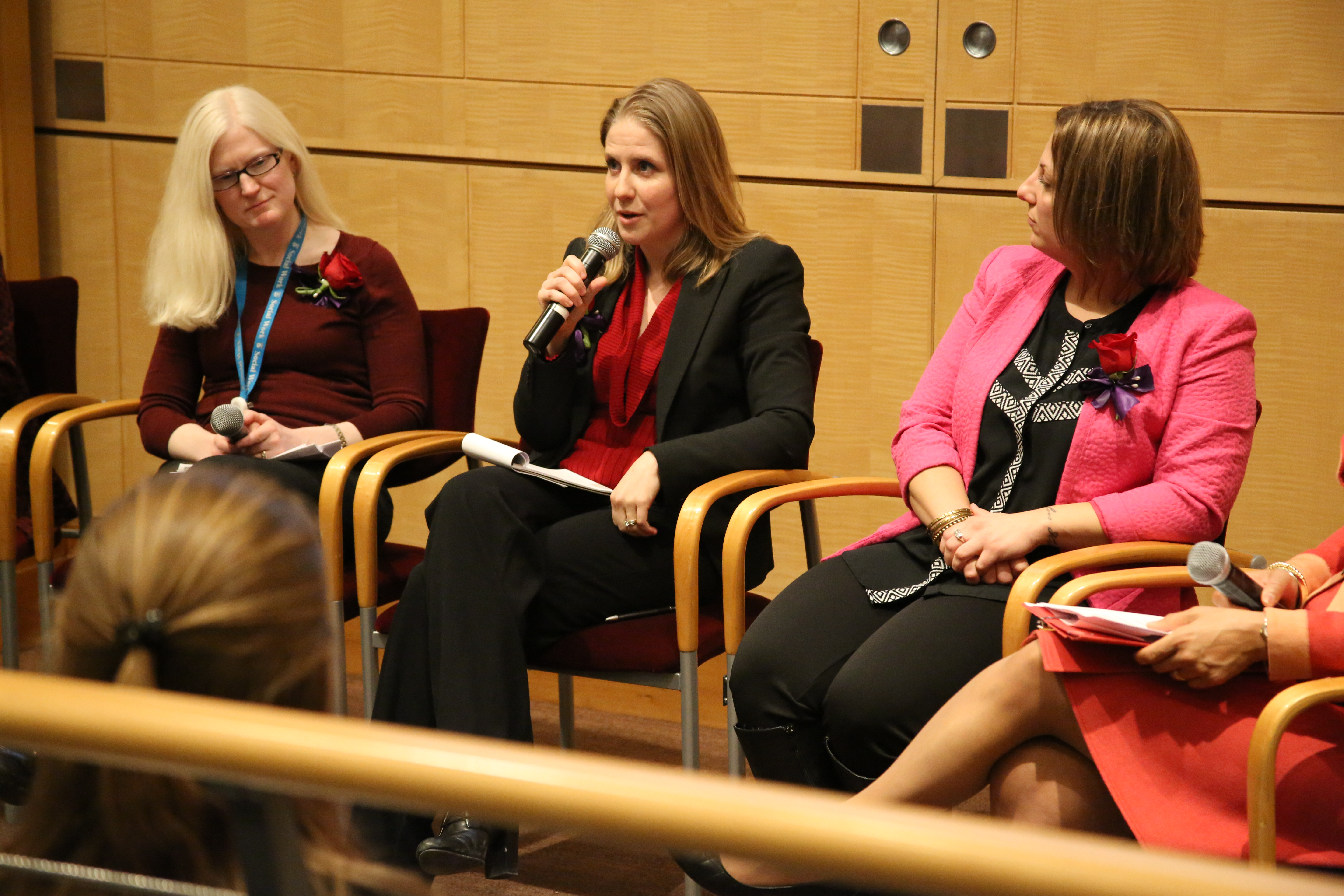 Though it may seem like a faraway issue, human trafficking—defined as the recruitment, acquisition, harboring or transporting of adults or children by improper means such as force, fraud or deception, with the aim of exploiting them for profit—happens here in the U.S., including in Boston.

On Feb. 12, BWH hosted an event in honor of V-Day, a global movement dedicated to ending violence against women and girls. The BWH event featured a compelling presentation by a survivor of human trafficking, followed by a panel discussion of how trauma-informed care can better identify and heal survivors of violence and human trafficking. Of the 21 million victims of human trafficking around the world, up to 88 percent report having interacted with a health care provider during the time they were being trafficked.

Survivor and advocate Jasmine Grace Marino was once one of these victims. During the five years when she was being trafficked, Marino had many appointments with her primary care physician at another hospital, but the physician never noticed the signs or the danger she was in, which included brainwashing, violence and the threat of violence by her trafficker.

“Human trafficking is hidden in plain sight,” said Marino, who, at 19 years old, first met the man who would become her trafficker. He paid her attention and treated her like a girlfriend at first, said Marino, who had experienced sexual violence in the past. “We were both coming out of a broken system.”

Marino has since founded a nonprofit called Bags of Hope, which provides basic needs and resources to women who are victims of trafficking.

“Human trafficking victims present in many clinical settings, including emergency medicine, OB/GYN, psychiatry, and primary and urgent care,” said panelist Hanni Stoklosa, MD, MPH, an attending physician in the Department of Emergency Medicine and a member of the Division of Women’s Health. “Health systems need to develop frameworks to better care for this highly vulnerable population.”

Annie Lewis-O’Connor, PhD, NP, founder and director of the BWH Coordinated Approach to Recovery and Empowerment (C.A.R.E.) Clinic, highlighted the importance of trauma-informed care—an approach to patient care that recognizes the presence of trauma symptoms in patients and acknowledges the role that trauma has played in their lives. She also shared some of the new approaches she and her C.A.R.E. Clinic staff are using to engage patients in their care, such as texting patients to check in on them between appointments.

“Each visit with a patient is an opportunity to act in a trauma-informed way,” said panelist Eve Rittenberg, MD, medical director for Primary Care at the Fish Center for Women’s Health. “That patient-clinician relationship is at the core of what patient care should be.”

Ellen Golden, MSW, LICSW, Emergency Department lead social worker, also lent her expertise to the panel, which was moderated by Paula Johnson, MD, MPH, executive director of the Connors Center for Women’s Health and Gender Biology and chief of the Division of Women’s Health.