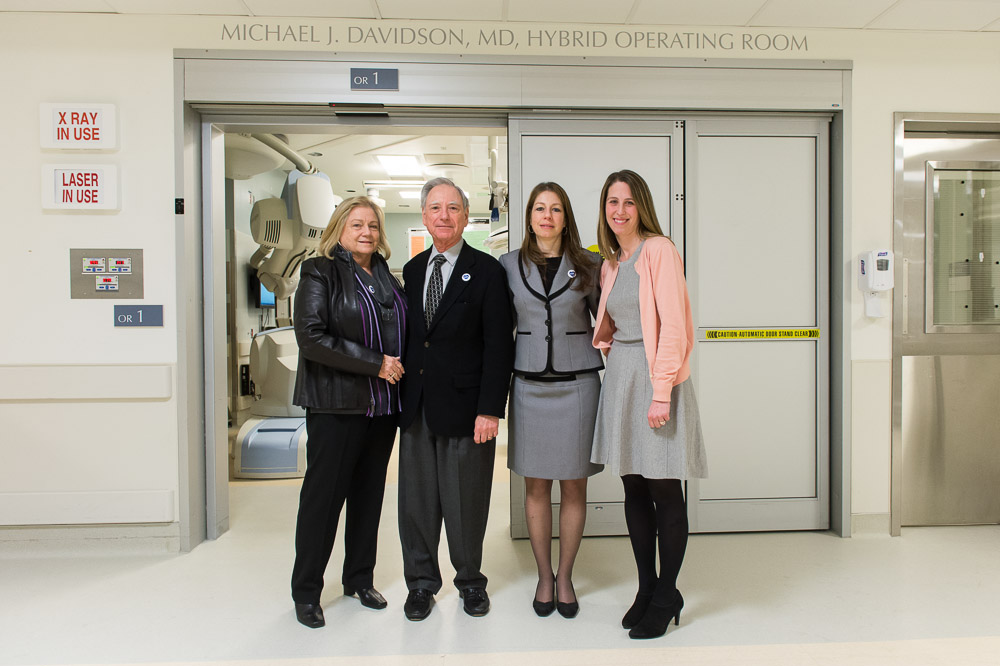 On Dec. 16, hugs and smiles were exchanged as members of the BWH community and guests filled Bornstein Amphitheater for a special Department of Surgery Grand Rounds honoring the late Michael J. Davidson, MD.

“This is one of the more significant grand rounds this department can have, as it honors the life of our dear colleague and to me, a dear friend,” said Surgery Chair Michael Zinner, MD. “He has left an indelible mark on this institution.”

Davidson’s father, cardiologist Robert Davidson, MD, shared a few words at the beginning of the event, detailing his son’s interest in science and medicine from an early age, his visionary proposal of universal access to medical care as his 1992 senior thesis at Duke University, and his devotion to his family. Davidson’s wife, Terri Halperin, MD; mother, Susan Davidson; and sister, Hillary Davidson, were also present.

The keynote address, entitled “Caring Goes All the Way: A Talk to Honor Michael J. Davidson, MD,” was presented by Mark Rosenberg, MD, president and CEO of the Task Force for Global Health—an international organization that focuses on health system strengthening, immunization and vaccines, and neglected tropical diseases. Rosenberg, an expert on violence prevention who worked at the Centers for Disease Control and Prevention (CDC) for 20 years, talked about the role of research in preventing gun violence.

“Violence is a problem; it is not a part of life to be accepted,” said Rosenberg. He advocates for the use of the CDC’s public health model to address gun violence. The model consists of four parts: defining the problem, identifying causes, developing and testing prevention strategies, and assuring widespread adoption. Though the problem has been defined and the causes identified, a halt in gun violence research for the past 20 years, largely due to politics, has left the country with little information in terms of what prevention strategies work and how to apply them. Rosenberg is optimistic that gun violence research is starting to begin again and encouraged the BWH community to be leaders in the response.

Later the same morning, BWHers gathered in Shapiro—many wearing MJD pins and blue surgical caps with gold stars and the initials MJD on them in honor of Davidson—for the dedication of the Hybrid Operating Room (OR) as the Michael J. Davidson, MD, Hybrid Operating Room. With his bold vision for less invasive approaches for treating heart valve disease and his ability to bring together cardiology and cardiac surgery for the purpose of delivering better care to patients, Davidson was a driving force in establishing the Hybrid OR.

“Michael was steadfast in becoming a cardiac surgeon,” said Halperin. “He pursued an additional year in interventional cardiology because he was convinced that cross-training was the future. He was a visionary, and he was right.”

Added BWHC President Betsy Nabel, MD: “It is fitting that Dr. Davidson’s calling in medicine was the heart. He cared deeply for every patient who sought his help. No matter how busy he was, he had a way of making each one feel as though they were his only patient.”

Nabel read the words of a plaque that now appears inside the Hybrid OR with Davidson’s smiling photo: With heartfelt gratitude to Dr. Davidson for his incredible commitment to his patients and his profession, and in celebration of his legacy as an outstanding, compassionate, and innovative cardiac surgeon.

“Michael felt honored to work with an incredible team,” said Halperin. “The Brigham was his other family. He would be honored to have his name on the OR. He dedicated his life to the OR; it is only fitting that this room be dedicated to him.”

View a photo gallery of the events, along with recordings of Surgery Grand Rounds and the Hybrid OR dedication.

“Remembering Michael J. Davidson, MD: Reflections on His Life and Legacy” will be held on Jan. 20, at 10:30 a.m., in Bornstein Amphitheater. All are welcome to attend. Learn more at BWHPikeNotes.org.