The beam features the names of two dozen pediatric patients from the Dana-Farber Cancer Institute, Children’s and BWH Radiation Oncology.

Tucked away on Shattuck Street, facing the windows of a Boston Children’s Hospital building, the names “Brooklyn,” “Nicholas,” “Kevin” and many others are spray-painted in bright orange, light blue, pink and white on a steel beam that will support the future Garden Café @ 75, BWH’s new Cafeteria.

They are the names of about two dozen pediatric patients from the Dana-Farber Cancer Institute (DFCI), Children’s and BWH Radiation Oncology, including 5-year-old Brooklyn, who was the first patient to have her name spray-painted on the 63-ton beam. After seeing a Facebook post written by Brooklyn’s mother, a family friend working on the construction site was inspired to begin spray-painting the children’s names.

“Seeing Brooklyn’s name on that steel beam is a feeling I will never forget,” said Kerrin Dooley, Brooklyn’s mother. “To me, the beam is a symbol of community, caring, support, strength and teamwork—all critical aspects in the fight against cancer.”

After being diagnosed in 2014 with neuroblastoma, a rare and aggressive form of pediatric cancer, Brooklyn underwent chemotherapy, tumor resection surgery, a stem cell transplant and immunotherapy at Children’s and DFCI, as well as 12 days of radiation at BWH. Brooklyn, who is now enjoying kindergarten and dance class, finished treatment last April, and her recent scans were clear of neuroblastoma. She continues to visit the Longwood Medical Area every few months for checkups, and she and her mother always make a point to visit the beam. 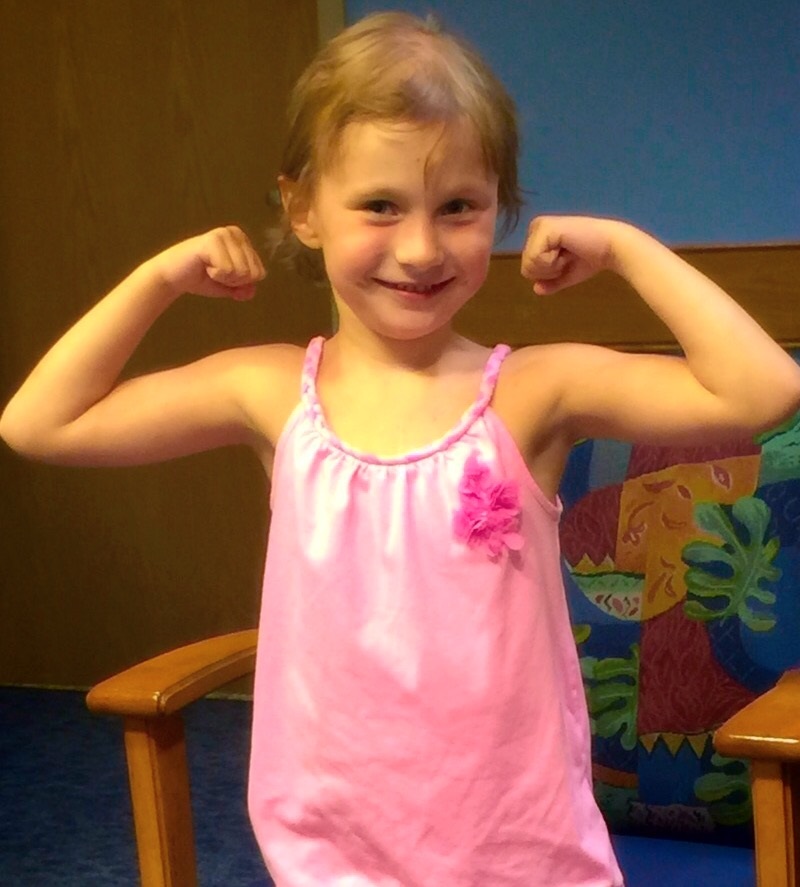 Five-year-old Brooklyn, who called the Longwood Medical Area home for 17 months, is now a healthy and strong kindergartner.

“Other parents and I are so moved that the crew from Suffolk Construction was thinking about our little warriors and making them feel so special,” said Dooley, who lives in Woburn. “It helped to keep us going. We will never forget the love and support stemming from the compassionate community here in Boston.”

Courtney Audet, a child life specialist in Radiation Oncology, has worked with several pediatric patients at BWH whose names have been spray-painted on the construction beam. She helps children and families get through radiation, working to make the process less overwhelming and scary. The department has a pediatric waiting area with toys and games, which helps, she says.

Many children, usually under the age of 4, require anesthesia when they undergo radiation because they aren’t able to stay still for the treatment. Audet helps parents and children through this process as well.

“A part of them will always be with the hospital that is working so hard to save them,” said Audet. “Seeing their names is extremely important and empowering because the children and families see that they are not in this fight alone.”

“Dr. Koka made each transition to sleep so easy for Brooklyn and for me,” said Dooley. “The nursing staff and radiation therapists were incredibly compassionate and consistently proved their expertise each and every day. I am so thankful for the care that was provided and will be forever grateful.”