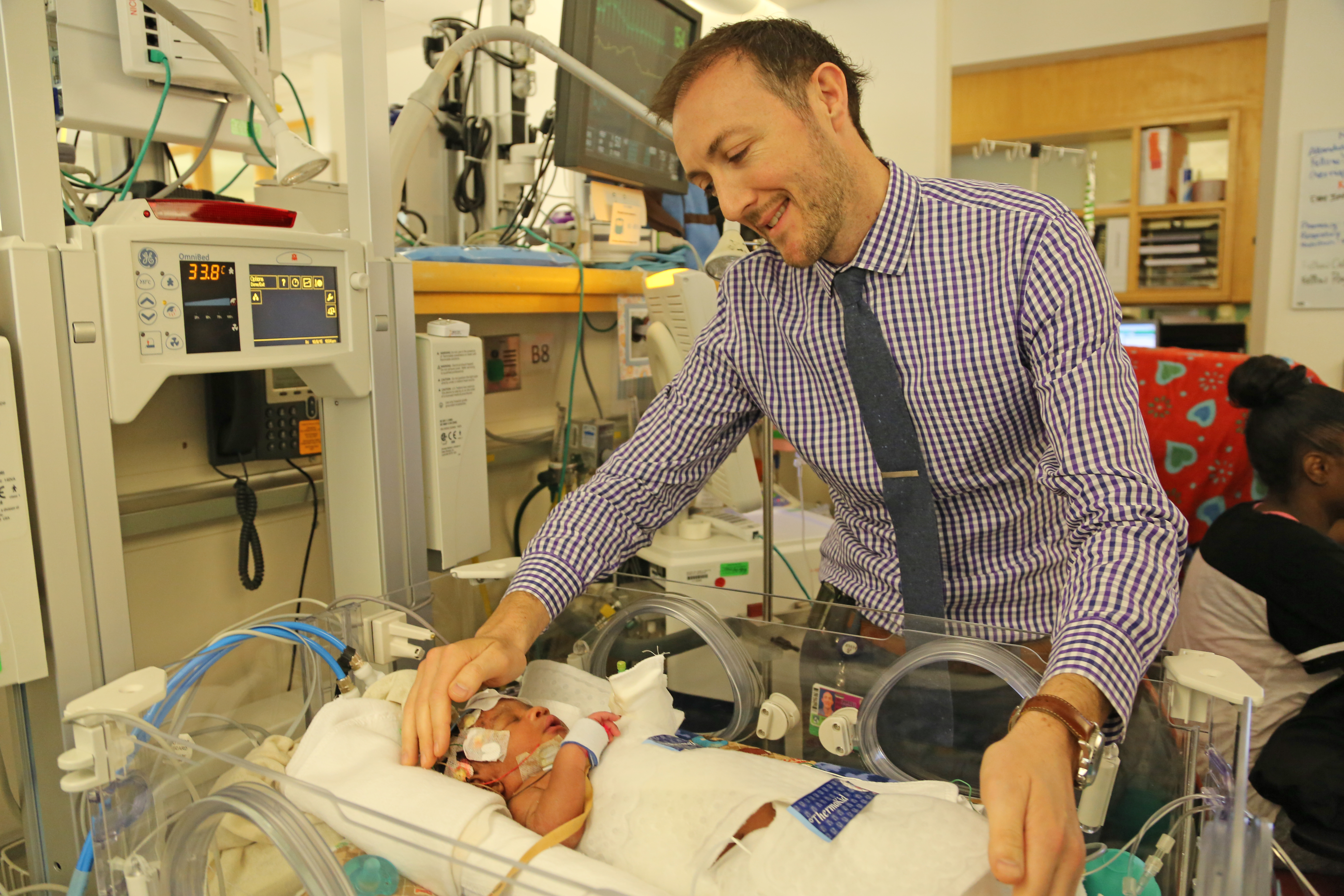 BWH NICU Medical Director Michael Prendergast cares for a baby who is wrapped in a cooling blanket.

Babies and warm blankets often go hand-in-hand, but for some newborns, a cool blanket plays a part in saving their lives.

Within minutes of delivery, Baby Annie was very weak and unable to breathe on her own and showed signs of an abnormal nervous system. Doctors quickly sprang into action, examining the infant and delivering oxygen to her lungs through a small tube.

This situation came as a shock to Annie’s parents, Heidi and Matt Boucher, because Heidi, who delivered Annie at Newton-Wellesley Hospital, had experienced a full-term pregnancy with no complications. The care team recommended that Annie be transferred to BWH’s NICU for further treatment and evaluation the same day.

After Annie arrived at BWH, her care team explained to the Bouchers the benefits that a cooling blanket therapy, called therapeutic hypothermia, could have on their daughter’s life.

The blanket, or wrap, circulates cool water around a baby, lowering the body’s temperature to 33.5 degrees Celsius (92.3 degrees Fahrenheit). Research has shown that this decrease in temperature essentially cools a baby’s brain and body, reducing the risk of seizures by half and brain injury by 25 to 50 percent, said Terrie Inder, MD, MBChB, chair of the Department of Pediatric Newborn Medicine.

“If it weren’t for the blanket, we don’t know if Annie would be the happy, healthy and playful little girl that she is today,” said Heidi. “We were amazed that a blanket could have such positive effects on a newborn.” 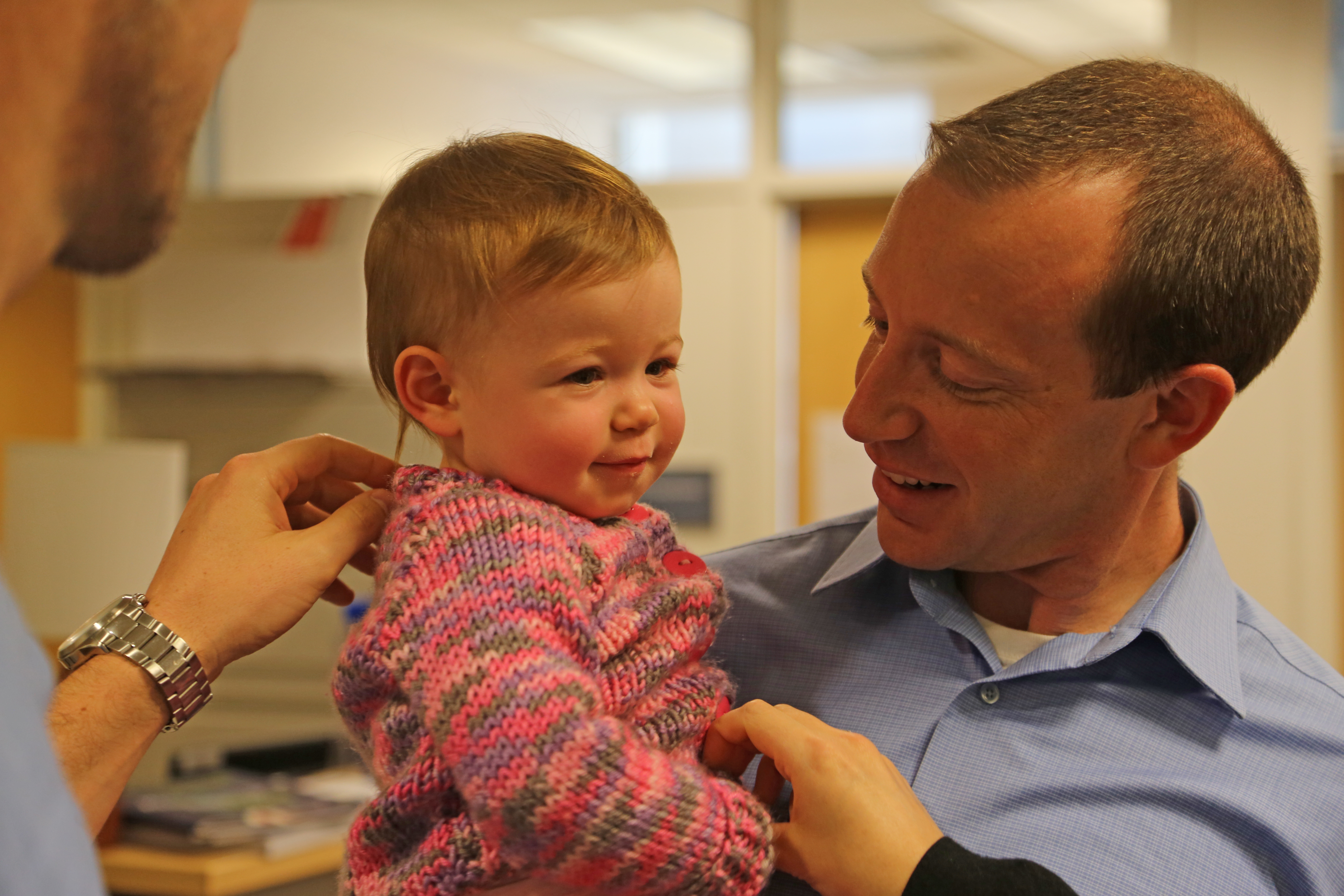 Under the direction of Inder, the NICU has increased its use of cooling therapy in the past two years on babies born at full term who, like Annie, experience hypoxic-ischemic encephalopathy (HIE), a lack of oxygen and blood flow to the brain at or near the time of birth. For several years, Inder, an international leader in neonatal neurology, has been at the forefront of pioneering guidelines for the use of cooling therapy for newborns.

A baby can be wrapped in the blanket within minutes or hours after birth. The blanket is kept on the baby for up to 72 hours during his or her stay in the NICU, after which the baby is slowly re-warmed to natural body temperature. During the course of the therapy, some babies can be held by their parents, which facilitates the important bonding experience.

“Birth is usually a wonderful and healthy event, but unfortunately it can sometimes be complicated by a period of reduced oxygen supply to the brain,” said Michael Prendergast, MD, medical director of BWH’s NICU.

Babies who have been treated in the NICU with the therapy have dramatic improvements in the health of their brain, says Inder. The growing use of this treatment is part of a broader shift in early-infant medical care to brain-centered care, focusing on babies’ long-term health after they leave the NICU, a passion of Inder’s. To date, the therapy has helped more than 80 babies at BWH, and BWH’s NICU is leading the way in maximizing the use of this therapy. The technology is also being used for newborns in hospitals around the country.

Before this technology was available, Inder said there weren’t any options for treating or recovering babies’ brains.

Annie, who is now 17 months old, hasn’t shown any complications since birth. After spending time in the NICU, her care team monitored her for several months at follow-up appointments to make sure she was thriving and meeting her milestones.

Heidi and Matt say they are grateful for the care their daughter received at BWH.

“The team at BWH is outstanding and really took care of us,” said Matt. “Not only did they calm our fears, but they took the time to explain everything that was happening. We are so appreciative of what the Brigham NICU has done for us and our daughter.”