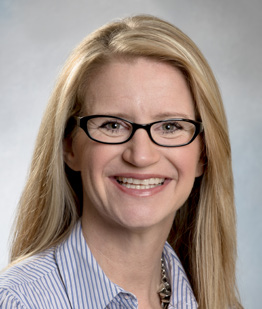 As one of the first female fighter jet pilots in the Marine Corps, BWH resident Alexis McCabe, MD, is used to thinking on her feet, a skill she says she’s grateful for as she trains to become an Emergency Medicine physician.

McCabe joined the Marine Corps in 1997 after graduating from college. She served 14 years on active duty, deploying to Iraq and Afghanistan in 2003 and 2005.

“All the men in my family served in the military,” McCabe said. “When I was graduating college, the law had just changed, and women were permitted to fly in combat. I wanted to serve, and I thought I would like to be a pilot.”

That initial interest eventually led her to become the first female Marine pilot to fly a F/A-18 Hornet combat jet off an aircraft carrier. Joining the military in 1997, she was commissioned as an officer and then began flight school. She received her wings in January 2001 and then underwent specialty training. “It was essentially residency for pilots,” she said.

After returning from her second deployment, McCabe did a tour in Pensacola, Fla., as a flight instructor. During that time, she decided that she wanted to pursue a second career in medicine, but with a limited science background (high school chemistry and geology 101), she needed the necessary prerequisites to apply to medical school and began taking night and weekend classes.

In 2010, McCabe started medical school at Tulane and served in the reserves. When she graduated in 2014, she knew that emergency medicine was the right specialty for her. “Nobody was surprised that I chose emergency medicine,” she said.

McCabe was thrilled to come to BWH for her training. “A good friend from medical school was training at BWH in Emergency Medicine, and I knew that if she liked the program, then so would I. After interviewing, I knew immediately this was my first choice.”

Added Eric Goralnick, MD, medical director of Emergency Preparedness: “Alexis is a dedicated compassionate physician who leads by example. We are so proud of her service to our community and our nation.”

When asked about the similarities between emergency medicine and flying a fighter jet, McCabe said: “Things move quickly, and you always have to be on your toes. You have to assimilate large amounts of information, picking out the most pertinent things and make a decision about what to do next almost simultaneously. You’re constantly reassessing as things can change in the blink of an eye. You have to always be ready for that.

“My previous career gave me experience in dealing with lots of different personalities, a skill I use in the Emergency Department every day,” she added. “And working as a team is also familiar. Everything in an airplane is team-based, and I know the importance of collaboration and bringing out the best in others. The ultimate goal is to get the aircraft airborne, complete the mission successfully and return safely. As the pilot, I’m only a very small piece of the puzzle.”

McCabe currently serves in the Individual Ready Reserves (IRR) and is in her second year of residency. Her husband is also a pilot, and together they have a 14-year-old girl and an 8-year-old boy.

One Response to “From Marine Corps to the Brigham: Fighter Jet Pilot to Emergency Medicine”