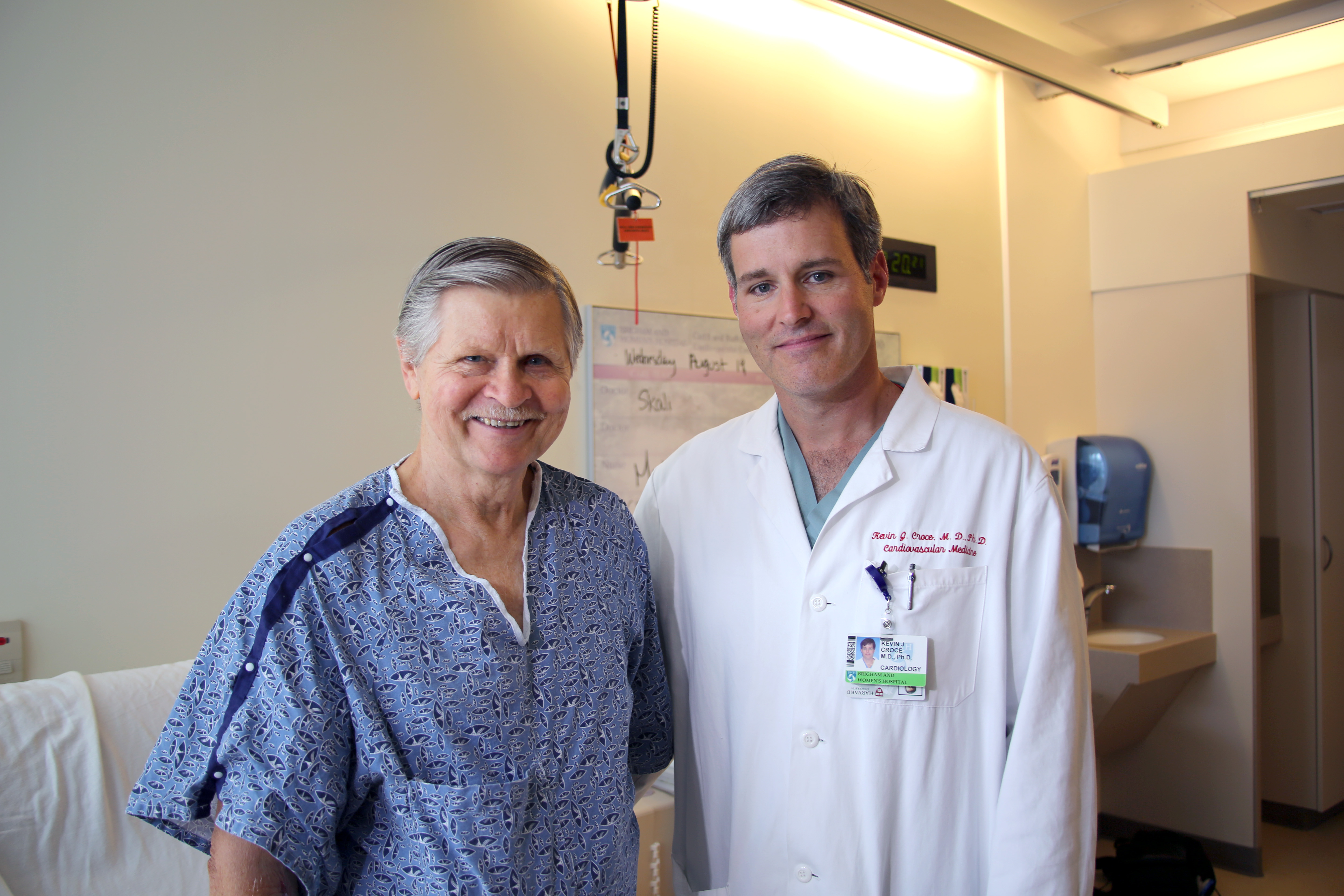 Dana Mower says he’s lucky to be alive today and credits BWH and the ABC News documentary series “Save My Life: Boston Trauma” with saving his life last month.

“I could have had a major heart attack,” Mower said. “I probably wouldn’t be here right now if I didn’t watch the program.”

On the evening of Aug. 16, Mower and his wife, Gail, who live in Lynn, tuned in to an episode of the six-part series, which highlighted the extraordinary trauma care provided at BWH, Massachusetts General Hospital and Boston Medical Center.

The episode featured a story about a man who thought he had heartburn and indigestion but was actually experiencing a heart attack. He was triaged in the BWH Emergency Department, and then interventional cardiologist Kevin Croce, MD, PhD, performed a heart catheterization. During the procedure, Croce inserted a small catheter tube through the patient’s arm to remove a clot near his heart and placed a stent to open the blocked heart artery and restore normal blood flow. The “Save My Life” episode was followed by a report on WCVB Channel 5, in which Croce spoke further about symptoms of a heart attack that often go unrecognized.

Mower, a retired engineer, had been experiencing indigestion and heartburn for several days. Discounting the symptoms, he went about his normal routine and figured he would feel better by the end of the week. Mower became more concerned when he saw the patient on TV because he realized his symptoms were similar. The next morning, Mower decided to go to BWH.

A BWH care team recognized that Mower was experiencing a heart attack and arranged for an urgent heart catheterization. Coincidentally, Croce was on call, and he and the BWH Cardiac Catheterization team, including Natalia Berry, MD, MBA, Joseph Dognazzi, RT, Robyn Weiser, CVT, and Nicole Segalini, RN, responded quickly. The team used a balloon and stent to open one of Mower’s arteries, which was 99-percent blocked.

Croce stressed that symptoms of a heart attack can vary from person to person, and it’s critical to see a physician if you are experiencing discomfort.

“Irreversible heart damage happens about 90 minutes to two hours after someone first experiences symptoms,” said Croce. “The damage caused by a heart attack can reduce the heart’s ability to pump blood.” In the most extreme cases, the heart attack can cause the “heart to stop completely before patients are able to get to the hospital.”

Looking back, Mower wishes he went to the hospital sooner. He hopes his story will help others recognize the signs of heart attack and respond more quickly than he did.

“I can’t say enough good things about the Brigham and my care here,” he said. “From my care team following proper hand washing protocol to answering all of my questions, I am just so pleased with my experience and grateful I came to the Brigham when I did.”

Special “Save My Life: Boston Trauma” Event at BWH, Sept. 16

In collaboration with ABC News, BWH will host a special event to celebrate its participation in “Save My Life: Boston Trauma” and the awareness it brought to the general public about important medical issues and the exceptional trauma and emergency care provided at BWH. On Wednesday, Sept. 16, at noon, in Bornstein Amphitheater, all staff are invited to attend a viewing of the BWH vignettes that aired on “Save My Life: Boston Trauma” and hear from ABC News staff who produced the show, as well as BWH staff who participated.