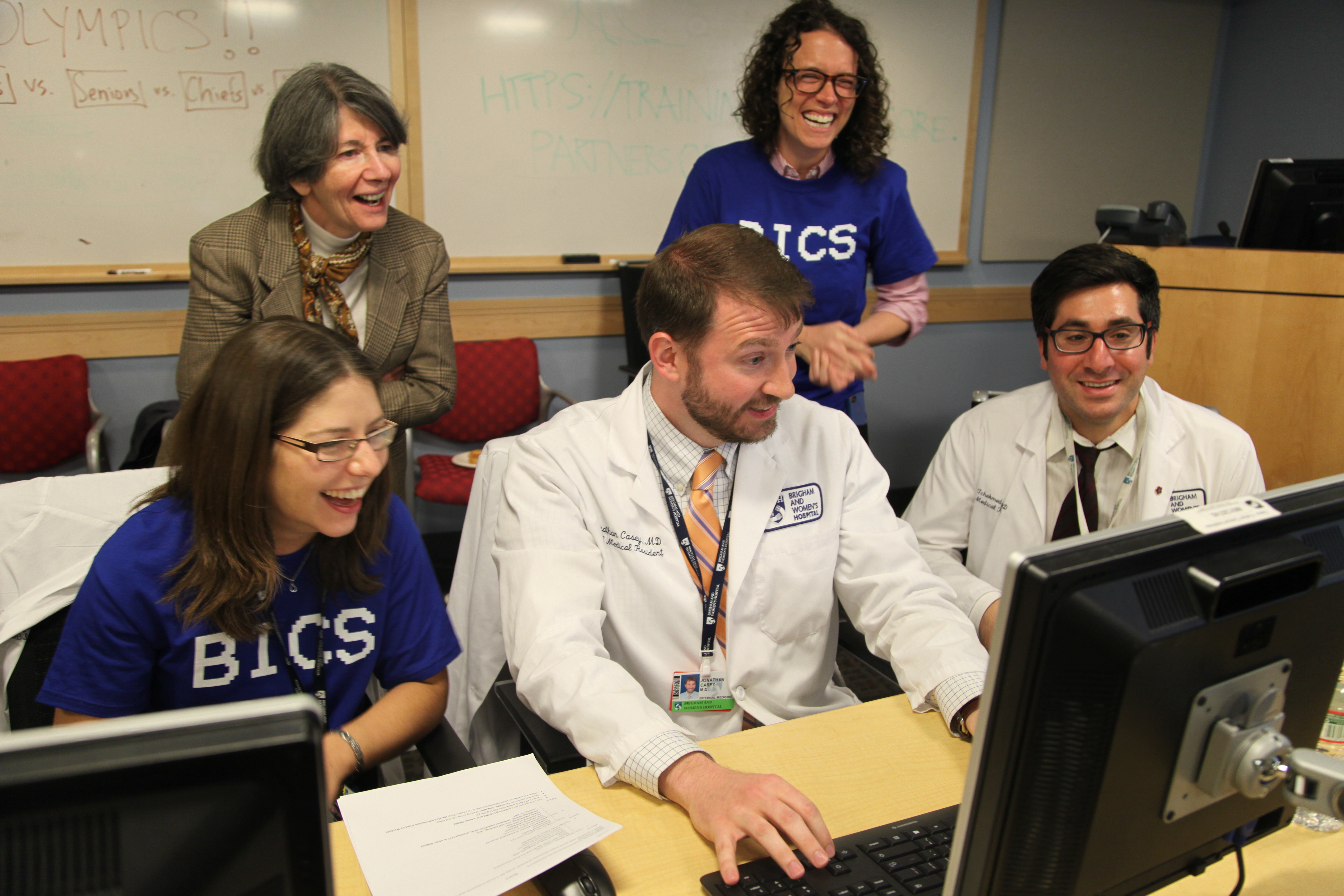 Speed and skill were the name of the game on May 1, as dozens of BWH residents faced off in the OlymBICS, a one-time competition in navigating the depths of the Brigham Integrated Computing System (BICS) before it is retired with the implementation of Partners eCare.

“On your mark, get set, go,” exclaimed Mary Montgomery, MD, one of the chief medical residents, who was sporting a blue “BICS” T-shirt specially made for the occasion. Within seconds, four teams made up of chief residents, seniors, juniors and interns huddled together at computers inside the Mayer Room at DFCI and worked their way through three relays. The relays consisted of such tasks as ordering difficult-to-spell medications and printing patient information forms, all of which used mock patient information.

The fastest team to complete the three relays was the junior resident team. After being declared OlymBICS champions, teammates celebrated the win by eating BICS-themed cake and taking photos with their trophy—a small blue wooden chair decorated with Bic pens.

On May 30, BICS and other legacy systems will be retired as BWH goes live with Partners eCare. The OlymBICS event was organized by David Rubins, MD, and Paula Chatterjee, MD, internal medicine residents, as a last hurrah for BWH’s original clinical information system, which launched in 1993.

Before the event began, teams were greeted by special guest Jonathan Teich, MD, of Emergency Medicine, one of the original founders of BICS.

Teich said when BICS was first implemented, the founders received their share of negative feedback. Now, many years later, he said it’s nice to see that people have grown to love the computer system.

“We tried very hard to make BICS something that was important for clinical care and easy to use for staff,” he said. “Now, we get to watch our baby BICS ride into the sunset. It has been a great 22 years.”

Regarded as one of the most functional systems in the health care industry, BICS combines clinical, administrative and financial computing services at BWH. It includes a vast range of hospital data and applications, including computerized provider order-entry, longitudinal medical records, operating room scheduling and automated inpatient summaries. BICS has achieved great success in helping to reduce adverse medical events, improve patient safety and increase cost savings. Partners eCare will take us to the next level as an integrated system across Partners with the opportunity to engage patients in their own care.