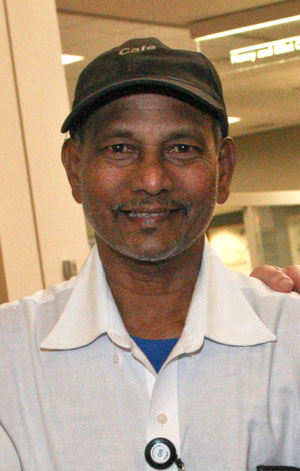 BWH and Food Services mourn the loss of Donald Rattan, who worked at BWH for more than 30 years. He died April 3 at the age of 68.

Former Food Services’ Catering manager Patricia Gleason-Claydon, a longtime friend and colleague of Mr. Rattan, said he was a hard worker who always looked out for others.

“Donald was an all-around great person,” Gleason-Claydon said. “You could always depend on him. He was a great friend.”

Mr. Rattan, of Quincy, was born in Trinidad. He began working at BWH in 1982. Most recently, Mr. Rattan served hot foods and sliced deli meat in the Cafeteria. He previously worked for BWH Catering.

Maria Terron, who worked with Mr. Rattan for the past 26 years, said she’ll miss taking lunch breaks with her good friend. She described him as a friendly person who was always smiling.

“He loved his job and took his responsibilities very seriously,” she said. “I’ll miss seeing him every day.”

Terron said if Mr. Rattan’s co-workers were ever feeling under the weather, he tried to cheer them up.

“He always offered natural remedies or recipes that could help make someone feel better,” Terron said. “He would check up on his co-workers and ask how we were doing.”

Friend and Food Services colleague Chantal Lucien, who worked with Mr. Rattan since 1989, also spoke of his kindness and compassion for others.

“He was always there for me,” Lucien said. “He cared about his co-workers. We miss him very much.”

He is survived by many friends, relatives and colleagues.