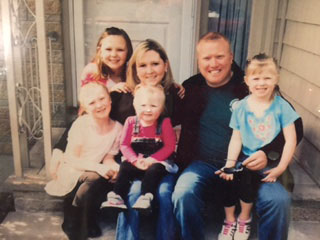 Cindy Scribner with her family

Cindy Scribner is certain she wouldn’t be alive today if it weren’t for the blood donations she received when a special technique, called extracorporeal membrane oxygenation (ECMO), took over the work of breathing for her failing lungs.

After battling idiopathic pulmonary fibrosis, a disease marked by scarring in the lungs, the wife and mother of four from Pelham, N.H., suffered respiratory failure last year and needed to be placed on ECMO at BWH before receiving a lung transplant.

ECMO is an intensive care technology that is used when a patient has a condition that prevents the lungs or heart from working on their own. An ECMO machine, or membrane oxygenator, takes over the work of the heart and lungs temporarily and acts as a lung to deliver oxygen into a patient’s blood, allowing a patient’s damaged lungs or heart time to rest and recover.

Susan Lagambina, assistant director of Respiratory Care Services, said the technique is an extremely advanced technology that acts as a bridge, either to a transplant or until the lungs or heart can function on their own again. Reasons patients need to go on ECMO include severe cases of pneumonia or other infections, or trauma, such as a car accident.

Since BWH began using ECMO two years ago, almost 60 patients have benefited from the technology.

Anesthesiologist David Silver, MD, who works on the ECMO service as a co-medical director, said while patients are on ECMO, a large quantity of their blood volume is circulating outside of the body to the artificial lung, meaning the patient’s blood volume needs to be replaced often.

The ECMO service is overseen by Silver, along with Phillip Camp, MD, of Thoracic Surgery, Gerald Weinhouse, MD, of BWH’s Pulmonary Division, and Gregory Couper, MD, of Cardiac Surgery.

While on ECMO, Scribner experienced severe but common bleeding complications because she had to take a blood-thinning medication for nearly two months. This meant she needed more blood, which is where the Kraft Family Blood Donor Center at BWH and Dana-Farber Cancer Institute came in.

While on ECMO, Scribner received 161 units of blood, which is equivalent to roughly 161 pints—an incredible amount, considering the average person has 10 pints of blood in his or her body.

“The combination of blood donations and ECMO kept me breathing and alive,” Scribner said. “I had such a positive experience at the Brigham.”

Without the Blood Donor Center, Silver said the ECMO program wouldn’t exist, as it has become one of the largest users of blood across the hospital.

Today, Scribner is feeling healthy and strong. She comes back to BWH to speak with current ECMO patients and visit her care team. She wishes she could personally thank every blood donor for taking the time to make a difference.

“By donating blood, you are saving so many lives,” she said. “I am very thankful.”

Paulette Downs, RRT, an ECMO specialist, was part of Scribner’s care team. She, along with other ECMO specialists who took care of Scribner, hosted a blood drive in her honor late last year. She said to see Scribner, who is thriving and enjoying every day with her family, is reason enough to become a blood and organ donor.

“Cindy has been an incredible inspiration to our ECMO program and the human spirit,” Downs said. “Her determination and will to live have never ceased to amaze me. Despite all of her complications, she remained positive.”

Read a related story about respiratory achievements at BWH, including ECMO and the original iron lung, which was first used at BWH predecessor institution Peter Bent Brigham Hospital.