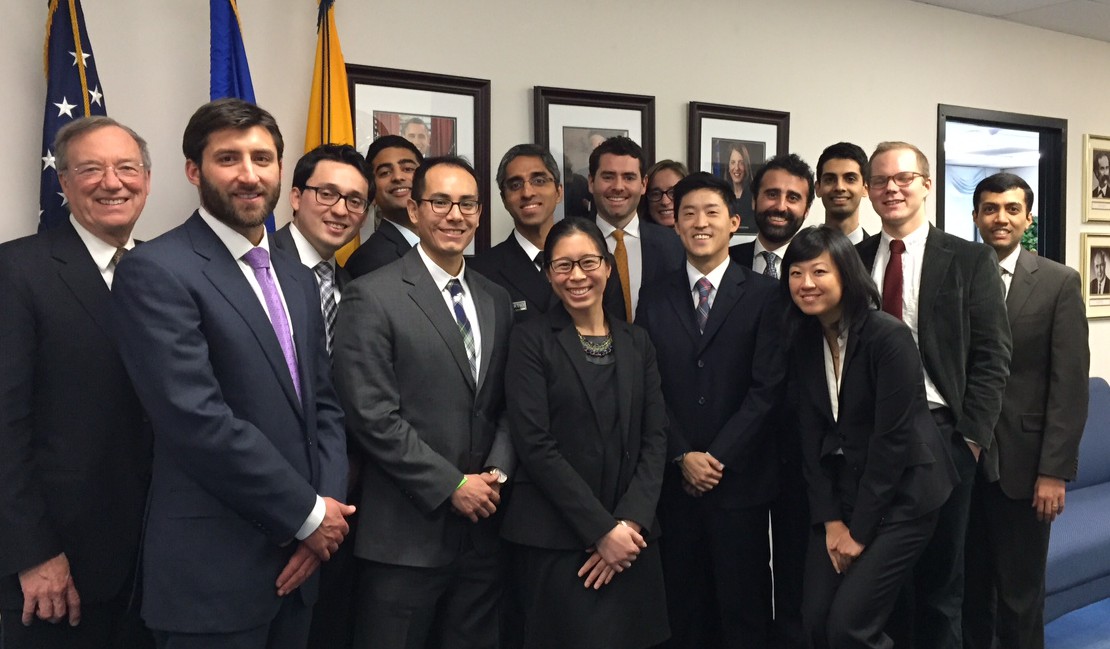 Although the itinerary for a health policy tour in Washington, D.C., for third-year internal medicine residents was jam-packed with meetings at impressive places including the White House, World Bank and Institute of Medicine, YiDing Yu, MD, said she never could have imagined the connection she would make.

Yu found herself in a stimulating discussion with World Bank President Jim Yong Kim, MD, PhD, former BWH chief of Global Health Equity, about the impact a mobile app developed by her start-up company could have in developing countries. Other residents were able to make similar contacts throughout the three-day visit to the nation’s capital.

The Washington, D.C. trip was part of the Internal Medicine Residency Program’s Management Leadership Track (MLT), a program for second- and third-year residents with an interest in administrative leadership, health care policy, delivery systems and entrepreneurship. The track was started in 2008 to allow self-designated internal medicine trainees to gain advanced skills in these areas.

“We are on the seventh year of the track, and it gets more robust each year,” said Stephen C. Wright, MD, who co-directs the program with Jose Figueroa, MD, MPH, with oversight by Joel Katz, MD, director of the Internal Medicine Residency Program.

The Washington visit—sponsored by the Martin P. Solomon Medical Education Scholars Program—was a new addition this year to help residents gain insight into how health care policy is made and implemented. The group participated in meetings at the Institute of Medicine, Office of Management and Budget at the White House, Association of American Medical Colleges, Centers for Medicare and Medicaid Services Innovation (CMMI) and Indian Health Service.

Many of these meetings were with BWH residency alumni now in high-level posts, including U.S. Surgeon General Vivek Murthy, MD, MBA, Julian Harris, MD, MBA, associate director for health at the Office of Management and Budget, Arnold Epstein, MD, deputy assistant secretary in the Office of Health Policy in the Department of Health and Human Services, Rahul Rajkumar, MD, JD, acting deputy director at CMMI, Tim Evans, MD, PhD, senior director of the World Health Organization Health Nutrition and Population Global Practice, and Kim, among others.

“The visit brought to light how many Brigham residency alums are in important posts in Washington, making decisions on health care policy,” said Figueroa, who is also an MLT graduate. “Everyone was excited about the meetings, and we learned a great deal about so many organizations that make high-level policy decisions.”

Added Yu: “I was really excited about meeting people and potentially building a network on this tour, but I was especially surprised by how willing people who come from the Brigham are to help each other.”

Wright noted that the experience was eye-opening in some ways, particularly with the Institute of Medicine and how it decides what issues to pursue.

The meetings were also important opportunities for networking and making connections, as Yu did with Kim. Other residents talked about their current research, which piqued the interest of some Washington staffers with similar research interests.

“This visit was good for our residents, good for the residency program and good for continuing to populate Washington with talented people,” said Wright. “It wouldn’t surprise me if several residents went in a new direction with their careers as a result of this trip.”

As for Yu, she has since been in touch with Kim, who has helped shepherd the idea of her company’s mobile app for use in developing countries. “Who knows where this will go, but the conversation has started,” she said.

Yu considers herself fortunate to be in the leadership track of the BWH residency program. “The philosophy is to cultivate ideas, nurture the interests of young trainees and help them open doors to career paths,” she said. “Joel, Jose and Stephen have created a program that does exactly that.”