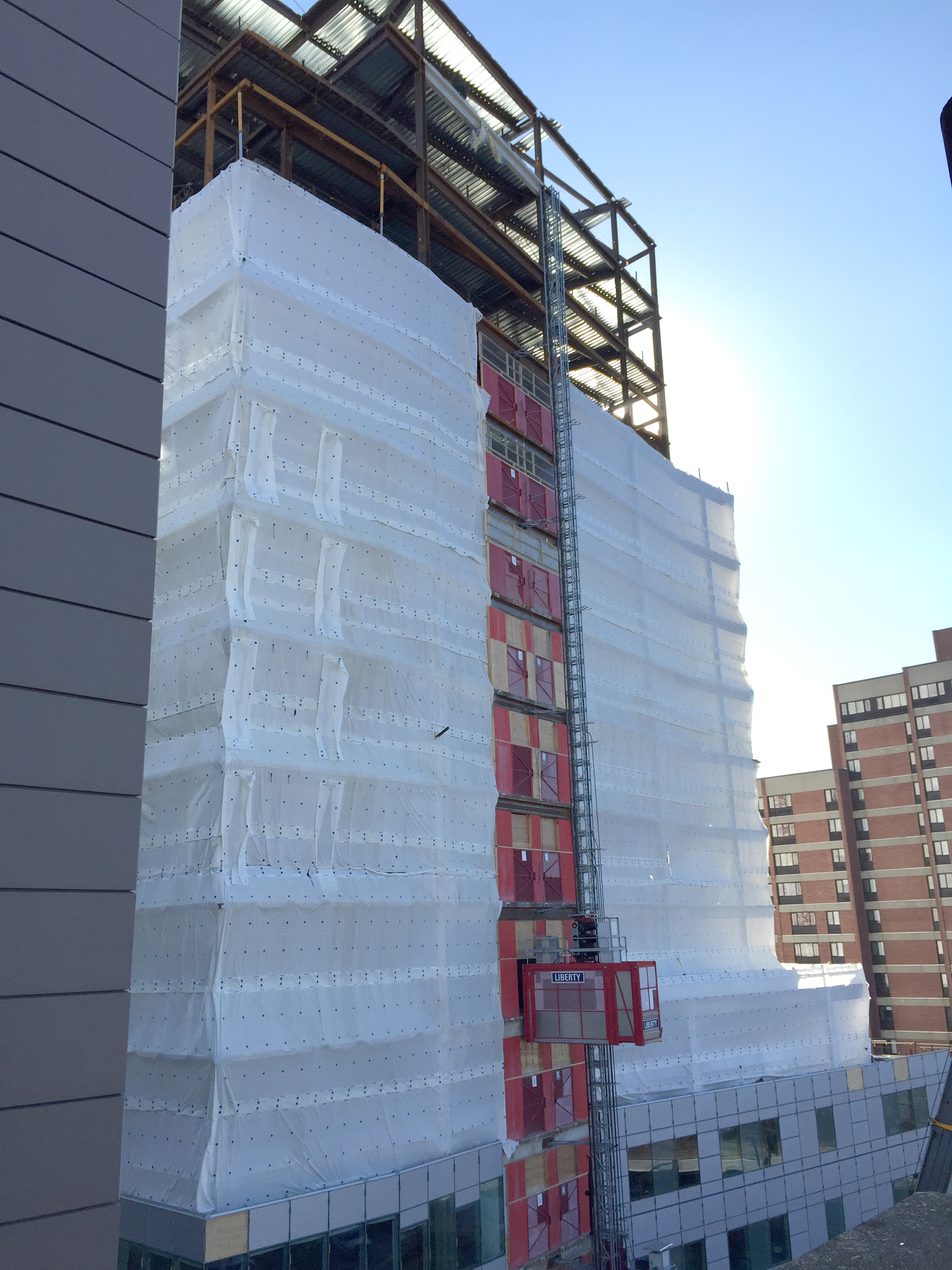 The Brigham Building for the Future (BBF) might look like a ghostly figure right now as tarps covering the soon-to-be walls of the steel structure flap in the wind, but behind the cloth, the 11-story translational research and clinical space is transforming into something spectacular every day.

With the final piece of steel placed on the building in December and the addition of an extra floor, the BBF has now reached its full height, which is a significant milestone, says lead architect Tom Sieniewicz, a partner at NBBJ architecture firm in Boston. Work is also being done to complete the underground parking garage.

The BBF, a 620,000-square-foot building scheduled to open in fall 2016, will include research laboratories, outpatient clinical space, a state-of-the-art imaging facility and a conference and teaching center. It will also house a co-generation power plant built in Germany—a natural gas-fired engine that will supply the building with electricity and steam.

Another major underground component will be the imaging facility. Inside the space, crews are currently building vibration isolation pads, which are massive blocks of concrete that will be used to ensure that the six highly-sophisticated MRI and CT machines maintain separation from the building structure and produce precise images.

An underground tunnel that connects the imaging facility and BBF to the Shapiro Cardiovascular Center is also being constructed. A bridge that will offer a public connection over Fenwood Road is being built and will also link the BBF to Shapiro and the rest of BWH via the second-floor Pike.

Steve Dempsey, director of Planning and Construction at BWH, said BWH was able to fund an additional floor with unused project funds that were left over as a result of effective design and cost projection efforts. Also, because the building was shorter—by a half floor—than the proposal approved by the city, adding an extra floor was an option.

Dempsey said the additional floor, which will house faculty offices, helped the project team go a long way toward aligning faculty, staff and researchers inside the BBF. He and his team have had discussions with all of the clinical and research groups that will practice and study inside the BBF and know who will be on which floors and in what locations.

Designed to achieve the environmentally friendly Leadership in Energy and Environmental Design (LEED) Gold certification, the building will feature a roof garden to reduce storm water runoff, a system that cleans and reuses storm water for mechanical equipment, the co-generation plant and other “green” aspects.

Vinnie McDermott, vice president of Finance and Real Estate for BWHC, said the project has proceeded remarkably well, which is a testament to the efforts of many people.

“The BBF will provide a platform for collaboration of clinical and research talent, investigating leading-edge discovery and providing innovative clinical care to our patients across the region, nation and world,” he said.

By springtime of this year, the building will be fully enclosed and transformed visually. This is when additional crews will be called in to work on the inside of the structure.