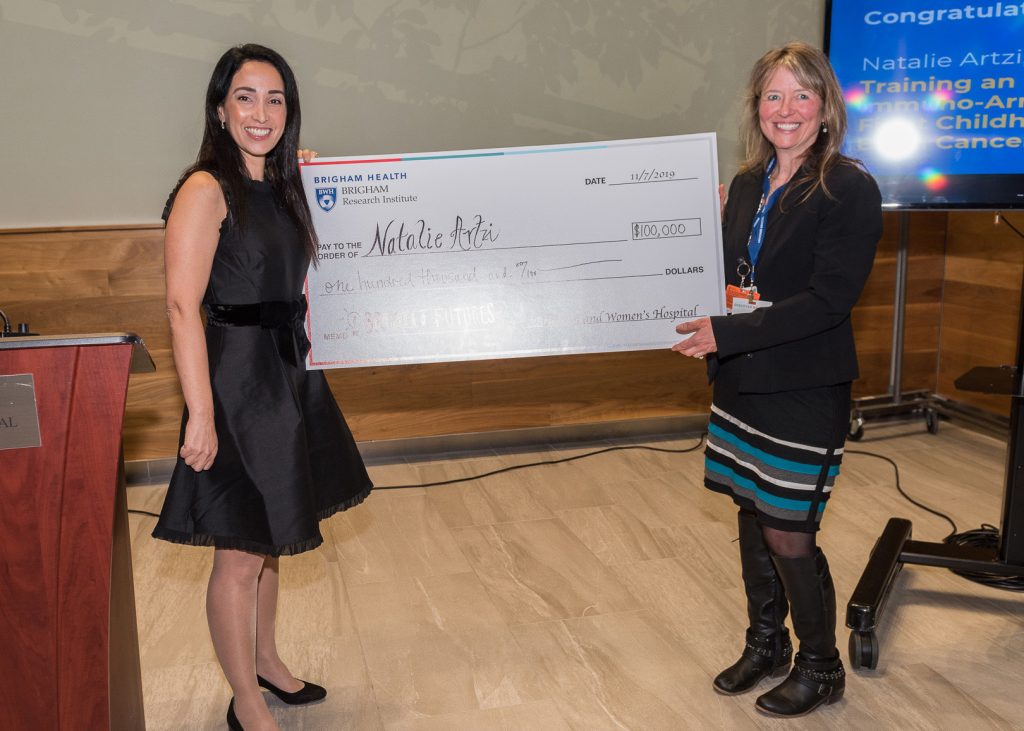 Natalie Artzi, PhD, of the Division of Engineering in Medicine, and her team were hard at work on research related to delivering cancer treatment when tragedy struck close to home. Artzi found out that a family friend’s 13-year-old son had been diagnosed with brain cancer. As she began reading more about the disease, Artzi realized how little progress had been made in the last 20 years.

“Treatment hasn’t improved much for this deadly cancer. With all of the advancements in our understanding of immunology, we thought, maybe we can leverage what we’ve been working on to change this,” said Artzi.

Artzi and her lab have been working on a new way to deliver effective cancer therapy where it is needed most. Their research on solid tumors, including breast cancer and colon cancer, has shown that local delivery — delivering a drug to the site of a tumor rather than infusing it into the bloodstream — is the best way to hit cancer hard while keeping side effects to a minimum.

“Less than 1 percent of the administered dose of drugs get to solid tumors. Now, imagine what’s happening when we have another biological barrier to cross, the blood-brain barrier, which is designed to keep molecules out,” said Artzi.

Artzi’s team specializes in nanotechnology and is developing particles no larger than 1,000th the diameter of a human hair that can deliver cancer drugs. They envision that during surgery to remove a tumor, an adhesive material containing the nanoparticles can be sprayed onto the brain, creating a hydrogel patch.

Artzi’s team is especially excited about the power of immunotherapy — a therapeutic approach that retrains the immune system to detect and destroy cancer cells.

“We think that combining the power of local delivery and immunotherapy will have a big impact,” said Artzi.

To build public support and funding for this new approach, Artzi submitted an application for the BRIght Futures Prize.

“I felt both excitement and fear,” said Artzi. “I have a lot of experience presenting at scientific conferences. But I had little experience in talking to the public. But as a scientist, we’re trained to dive into new areas.”

Artzi and her lab worked tirelessly to engage with as many people as possible to raise awareness about their research, especially on social media.

“We did as much as we could, as fast as we could, and just when I thought we’d done everything possible to get the word out, we accelerated even more.” said Artzi.

Lab members from Mexico, Spain, Portugal, Brazil, England, Ireland, India, China and Israel began sharing news about the competition with people from their home countries and word spread rapidly. News stations became interested, and Artzi was soon interviewed by broadcasters in Israel. As the project began to go viral, messages of encouragement poured in.

“We got messages from families of brain cancer patients encouraging us to keep pursuing this project. Some said they knew it was too late for the work to help their loved ones, but they hoped it would save the lives of other children someday,” said Artzi. “There were so many times when I was in tears.”

The project also generated buzz closer to home — faculty members from the Neurosurgery Department have reached out to Artzi about future collaborations.

Artzi says the competition has given her team opportunities they could not have predicted.

“I didn’t anticipate that level of support and touching responses from people all around the world,” Artzi said. “The recognition, the excitement, and the hope it gave people — that’s what we came here to do. Saving lives is our dream, and this competition gave me a glimpse into how it could be.”