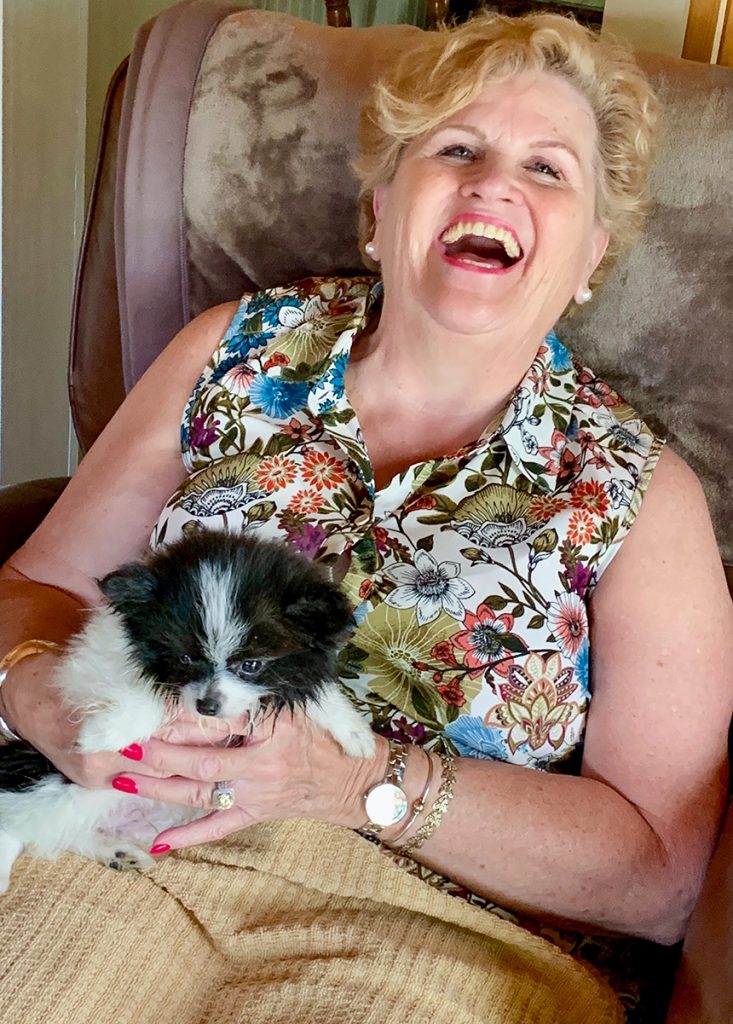 Earlier this year, Sabina Barry, 69, couldn’t imagine walking up the stairs without gasping for air. Today, she’s doing a lot more than that — including playing catch with her grandson and keeping up with a playful new puppy — thanks to the lifesaving care she received at the Brigham.

Since age 60, Barry had been advised by her doctor to undergo an annual echocardiogram to monitor her heart health. She soon learned she had aortic stenosis, a common but serious disorder in which blood is unable to flow freely from one of the heart’s valves to the body’s main artery, the aorta. For years, her case was diagnosed as mild to moderate, but last August her primary care provider in New Hampshire informed her that the condition had progressed to moderate-to-severe status.

Barry was stunned. She had recently lost 60 pounds, and the fatigue and shortness of breath that would later become debilitating were mild enough then to seem like a normal part of aging.

“‘You’re looking at open-heart surgery in a year,’” Barry recalled her doctor saying. “I looked over one shoulder and then the other, and said to him, ‘Do you have the right chart?’”

By the fall, however, it was clear there was no mistake. Her symptoms worsened by the day.

“I knew open-heart surgery would have a difficult recovery. My husband had it at 85, and I saw firsthand what he went through over two to three months,” Barry said. “I was really hoping there would be an easier and faster solution.”

After seeking a second opinion at the Brigham, Barry learned she was a candidate for a clinical trial involving transcatheter aortic valve replacement (TAVR), a minimally invasive alternative to open-heart surgery performed in the Cardiac Catheterization Lab. Traditionally reserved for sicker, older patients in their late 70s and 80s who have other health complications — and for whom surgery carries higher risks — TAVR uses advanced imaging to help specialists guide a catheter into the heart through a small incision in the leg, groin or chest and insert a replacement aortic valve.

TAVR can be done without general anesthesia and usually offers a quicker recovery than conventional surgery. The procedure takes about 90 minutes, with patients often discharged within a day or two.

Barry underwent a TAVR in March as a participant in the PARTNER 3 Continued Access Trial registry, a continuation of the landmark PARTNER 3 Trial, which reported this spring that TAVR was effective and safe for low-risk patients like her with severe aortic stenosis. The Brigham was one of two centers in New England contributing to the study.

“Amazing, amazing, amazing — that’s how I feel today. There aren’t words to explain the difference between before and after. I feel like I’m 50 again,” Barry said. “It’s incredible to have this procedure on a Thursday, go home Friday and be back at work the next week.”

This month, the U.S. Food and Drug Administration approved the clinical use of TAVR for low-risk patients. With this approval — backed by evidence confirming TAVR is as good as open-heart surgery in terms of valve function and long-term outcomes — the procedure is now the default treatment option for most patients with severe aortic stenosis, said interventional cardiologist Pinak Shah, MD, medical director of the Brigham’s TAVR program.

Brigham cardiac surgeon Tsuyoshi Kaneko, MD, agreed: “We’re going to see a paradigm shift. Whenever we see patients with aortic stenosis, we will be thinking of TAVR as a first potential option rather than surgery.”

Noting that not all patients will be candidates for TAVR based on their anatomy, Shah and Kaneko said the Brigham Heart Team carefully evaluates each individual to determine the best treatment option.

“It is exciting and a privilege to be at the forefront of the implementation of this technology that will benefit so many patients,” Shah said. “It has been a remarkable journey watching TAVR being performed only in clinical trials to now being a standard procedure, and all of this has happened in a span of just over a decade. It is hard for me to think of another technology in medicine that has been so transformative.”

Not Missing a Beat

Barry, who has also twice overcome breast cancer, said the procedure has opened up her heart in more ways than one.

When she was at her sickest last year, she grieved the loss of her beloved dog of 14 years. Buoyed by her new energy, she recently adopted a precious Pomeranian, Poco, who fills her life with joy and even accompanies her to cardiac rehab.

“I could say Poco rescued me,” Barry said. “I truly believe you don’t realize how sick you are until you get better, and I really mean that from the bottom of my heart. It’s so hard to put into words how it feels to get your life back.”