Established in the aftermath of the Boston Marathon bombings, The Gillian Reny Stepping Strong Center for Trauma Innovation has evolved from one family’s bold response to a personal tragedy to a thriving, multi-institutional, multidisciplinary hub tackling the continuum of trauma care — from prevention to treatment to rehabilitation. Its mission is to catalyze multidisciplinary collaborations that inspire groundbreaking innovation, effective prevention and compassionate intervention to transform care for civilians and military heroes who endure traumatic injuries and events.

You can advance this critical work by supporting the Stepping Strong Marathon Team. Click here to meet members of the team or make a gift.

It was a spring day in 2013 when Brigham nurse Emilie Schlitt, BSN, RN, PCCN, CWOCN, wheeled her patient, Gillian Reny, then 18 years old, out of the 45 Francis St. entrance. It was Reny’s first time outside since she had been rushed to the Brigham after suffering devastating injuries in the Boston Marathon bombings.

Sunshine warmed their faces, and Reny relaxed into a smile. 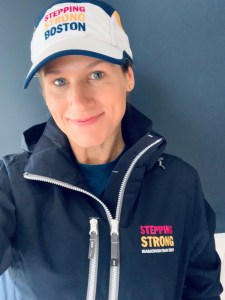 “I couldn’t think of a better team to run for or support,” says Schlitt.

Schlitt still gets choked up thinking about that moment, even after all these years.

“I remember that day like it was yesterday. Just to see that smile on her face was everything. It makes your day as a nurse,” said Schlitt, who was among the team that cared for Reny and other marathon bombing survivors on the Plastic Surgery Stepdown Unit in 2013. “She hadn’t been outside since the bombing, and that was her biggest challenge for the day at that point. Seeing her smile was amazing. It was almost like being a parent — you’re so proud.”

That strength and resilience continue to inspire Schlitt, who will run this year’s Boston Marathon to support trauma survivors like Reny on behalf of the Stepping Strong Marathon Team.

“A lot of what I teach my patients is what the Stepping Strong Center also values: getting patients back to doing what they love,” said Schlitt, who is now a Wound and Ostomy nurse. “Stepping Strong and the Renys have turned something so tragic into something positive, and it’s been incredible to see Gillian flourish into the lovely young woman she is today after going through everything she did. I couldn’t think of a better team to run for or support.”

Although Schlitt is a longtime runner, this will be her first marathon. Even after a few setbacks in her training, she says her momentum and motivation grow stronger each day.

“Marathon training is not easy, but when I think of what Gillian and so many of my patients have gone through, it helps push you through everything,” she said. “Gillian woke up every single day, ready to conquer a new day and a new challenge. There is no reason that I cannot get one foot in front of the other and continue training, no matter what.”

It’s a dedication she also brings to her nursing practice.

“When you are with a patient, they are the only one in that moment,” Schlitt said. “You take a deep breath, push aside whatever else is going on and ensure your patient feels like they are the only person you are caring for that entire day.”

Paul Kent, 58, had both of his legs amputated below the knee, but don’t ever tell him he’s suffered limb loss. Quite the contrary, he insists. Becoming a bilateral Ewing amputee gave him everything — most importantly, his life. 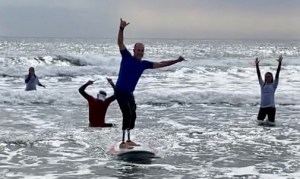 Kent stands on a surfboard with his new prosthetics for the first time at York Beach in Maine.

Kent, who goes by PK, developed a genetic peripheral neuropathy in his 30s that, by his late 40s, led to near-constant wounds on his feet. Although he felt no pain, the condition led to life-threatening infections that required frequent hospitalization.

Once an endurance athlete and avid swimmer, Kent found himself struggling to do basic tasks. His health concerns became so grave that the single father of two stopped planning family vacations, unable to even think a few months ahead.

“Every day, I lived with a fear of death because a wound could turn into sepsis. The day of my surgery, Dec. 1, 2020, my life changed for the better — immediately,” Kent said. “I probably wouldn’t be alive today without the Ewing amputation.”

In 2016, a clinical team led by the Brigham’s Matthew J. Carty, MD, a surgeon in the Division of Plastic and Reconstructive Surgery and director of Strategy and Innovation at the Stepping Strong Center, in collaboration with Hugh Herr, PhD, of the Center for Extreme Bionics in the MIT Media Lab, invented a new type of lower-limb amputation procedure, known as the Ewing amputation.

Named after the experimental procedure’s first patient, Jim Ewing, the Ewing amputation preserves normal signaling between the muscles and the brain. Compared to a standard amputation, the Ewing procedure maintains natural linkages between muscles in an amputated leg, so amputees feel as if they are controlling their physiological limb, even though it’s been replaced by a prosthesis.

Once he healed from surgery, Kent was eager to put his new prosthetic limbs to good use.

“When I stood up on a surfboard for the first time this past summer, it told me there are no limits on what I can do,” he said.

Next on his list: running the Boston Marathon, which he will do this year for the first time as a member of both the Brigham’s Stepping Strong team and Spaulding Rehabilitation Hospital’s Race for Rehab team.

The Stepping Strong Center’s bold vision for trauma innovation makes it a powerful incubator for ideas that can transform the lives of amputees, Kent said. In particular, he is impressed with the center’s support of early-career investigators and novel projects that may not necessarily garner traditional research funding.

“I like what’s going on at Stepping Strong and the progressiveness of the program,” Kent said. “It incentivizes out-of-the box thinking.”

Kent is also on his own mission to improve the lives of fellow members of the disabled community, having recently launched (dis)ABLED Life Alliance, a public benefit corporation whose first initiative is focused on increasing access to prosthetic devices.

Although he knows the marathon is an ambitious challenge, Kent says nothing can stop his momentum.

“I’ve been held back for so long,” he said. “As Dr. Chris Carter over at Spaulding said to me, ‘Your victory is showing up at the starting line.’”

From left: Vanessa Welten is joined by her father, Harry, during a road race; Harry Welten achieves his career best at the 1994 Boston Marathon; a young Harry Welten with baby Vanessa.

Vanessa Welten, MD, MPH, was navigating the usual stressors and challenges of her first year of surgical residency in February 2019 when tragedy struck: Her father, Hendrikus “Harry” Welten, was killed when he was struck by a vehicle while out on a run after work near their family’s home in Ottawa, Canada.

“It was devastating,” she said. “I needed to find a way to channel my grief.”

Her path to recovery started with taking up the sport her father loved: running. An elite marathoner, Harry Welten had been competing in marathons since his late 20s. On April 18, 1994, he achieved his personal career record of 2 hours, 21 minutes and 45 seconds in the Boston Marathon, finishing as the first Canadian and 52nd overall.

Exactly 28 years later, Welten will follow in his footsteps — literally — and honor his memory by running this year’s Boston Marathon with the Stepping Strong team.

“I learned about Stepping Strong through my work experience, and their mission really resonated with me — the idea of turning tragedy into hope,” said Welten, now a fourth-year resident in General Surgery at the Brigham. “I decided I’m going to do this for my dad, for me and for this bigger cause.”

Training for the race has helped Welten process some of her grief. While running, she listens to music that reminds her of her father: Bruce Springsteen, The Who and Bryan Adams.

“I feel closer to him, but it’s a mix of emotions,” she said.

While Harry Welten had plenty of his own boast-worthy accomplishments, his greatest pride and joy — and what he bragged about the most — were his daughters.

“He would tell everyone every single detail of our lives, regardless of whether they wanted to hear about it. He was so proud of us,” Welten said. “But our accomplishments are in large part a reflection of what he did for us. He wanted us to excel and pushed us because he saw our potential. He encouraged and supported us, and never put a limit on anything we wanted to accomplish. He was our family’s cheerleader and the type of person who made you feel like you mattered.”

Her own family’s experiences have also underscored why a patient- and family-centered approach is essential to surgery.

“I wasn’t the trauma victim, but I very much feel tied to the trauma that happened to my dad,” she said. “When I see patients who have experienced devastating trauma or injuries, I’m also always trying to clue in on those support people in their lives who might be struggling. Taking care of a patient is so much more than taking care of the ailments that you see. It’s a much bigger picture and requires a much bigger team, and that goes back to Stepping Strong. They emphasize a holistic approach to healing because they consider all the different ways trauma can impact someone.”