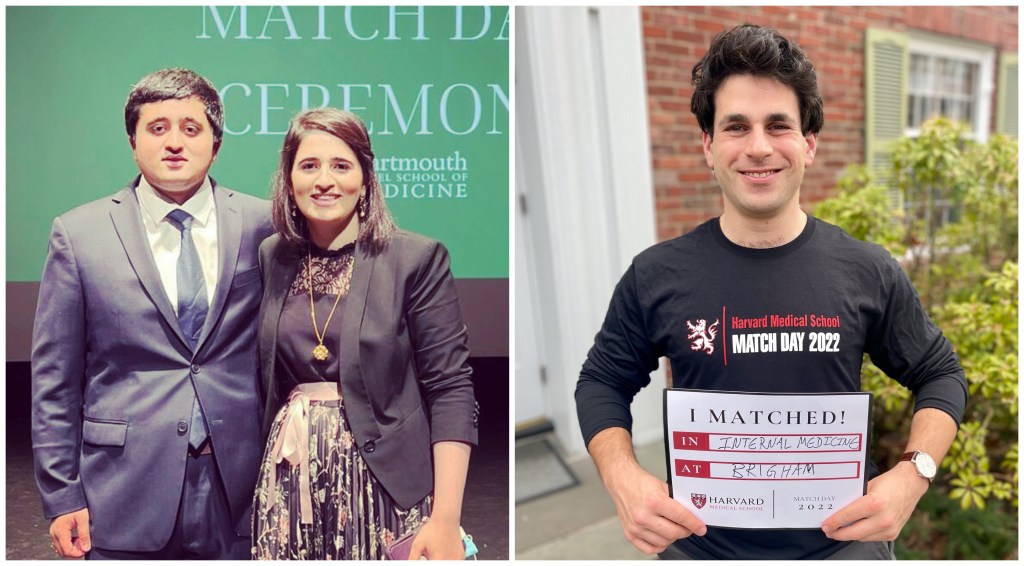 Yasmin Kamal (left photo, pictured with her brother, Nabi Akram) and Sam Doernberg (right photo) are among the 75 aspiring physicians who learned of their acceptance the Brigham’s Internal Medicine Residency Program on Match Day.

Growing up, Yasmin Kamal, PhD, and her sisters received a chilling message: Educating girls is dangerous.

Want proof? Just look at Aunt Bibi, they were told by relatives from their small village in rural Pakistan. Aunt Bibi was the only girl in the family who had been allowed to attain a middle school education — and she was the only one who behaved erratically, sometimes with hostility. From the family’s perspective, the link was undeniable.

“They always said Bibi went insane,” recalled Kamal, who learned years later that her grand aunt had been married off at a young age, thrust into city life without any support, suffered a traumatic miscarriage and then experienced the onset of what was likely untreated schizophrenia.

Despite the convictions many in the family held, Kamal’s father, a taxi driver in Washington, D.C., continued to value his children’s education, even in the face of financial barriers during the 2008 recession, in the hope that it would give them a better life — something not afforded to Bibi.

“As I grew older, I learned more about Bibi’s life, what happened to her and the stigma of women getting educated. That stigma percolated a lot in my life because I was the most bookish kid of my six siblings. My family was always worried that if I read too much that I would ‘go insane’ like Bibi did,” said Kamal, who, driven by scientific curiosity and a will to help others, devoted herself to challenging and defying those expectations. 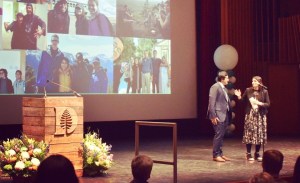 Kamal celebrates her Brigham match during a Match Day ceremony at Dartmouth.

Now, she stands on the cusp of graduating from the Geisel School of Medicine at Dartmouth, and will embark on a career in medicine when she begins her residency training at the Brigham this summer.

“I was so surprised, shocked, grateful and thankful to God it worked out the way it did. The Brigham was my first choice. It’s the perfect place for me to grow and learn as a physician, scientist and person,” said Kamal, who was one of 75 medical students to learn of their acceptance into the Brigham’s Internal Medicine Residency Program on March 18.

Across all Brigham residency programs participating in Match Day — when thousands of medical school students across the country discover where they will continue their medical training — 231 aspiring physicians matched at the hospital this year.

“Match Day was a resounding success with these talented, diverse and altruistic physicians choosing to continue the next stage of their training at the Brigham,” said Joel T. Katz, MD, director of Internal Medicine Residency Program. “They are also a particularly resilient group, having completed much of their medical school training under the strains of the COVID pandemic and helping fight it on many fronts — making contributions to direct patient care of vulnerable populations, innovative educational models, clinical trials and basic science.”

For Kamal, the moment of opening the envelope to reveal her match felt like the culmination of so many threads in her life. In addition to her aunt’s story, Kamal witnessed how inadequate access to health care caused other medical conditions in her family to go undiagnosed, sometimes with devastating consequences. She was also inspired by one of her sisters, who has Down’s syndrome and whose experiences ignited in Kamal a desire to understand the links between genetics, disease and disability.

While attending a science and technology high school, she obtained a summer internship at the National Institutes of Health, where she had an opportunity to work alongside physicians and researchers helping patients identify rare, undiagnosed diseases.

“Seeing the impact those physicians made on patients and families really hit close to home for me because it showed that when you’re caring for a patient, you’re taking care of their family at the same time — and the care you give them makes a huge difference,” said Kamal, who aspires to become a physician-scientist specializing in gastrointestinal diseases. “It’s going to be a lot of responsibility, so I’m hoping I can meet the moment.”

Family history also inspired fellow newly matched intern Sam Doernberg, who will graduate from Harvard Medical School this spring and is currently on a rotation in the Brigham’s Emergency Department. 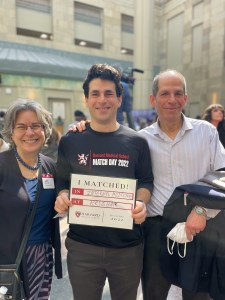 Sam Doernberg celebrates Match Day with his parents at HMS.

In the early 1940s, at age 17, Doernberg’s grandfather sought medical care after seeing blood in his urine. Doctors suspected it was caused by a large kidney stone and advised that he have it surgically removed. During the operation, the surgeon realized that the cause was renal tuberculosis, a version of tuberculosis that spreads to the kidney. In his efforts to remove the kidney, however, the surgeon injured the bladder and ureter. Rather than disclose the error, the surgeon attempted to cover up the mistake.

Those injuries led to multiple complications and infections that left Doernberg’s grandfather chronically ill and bedridden for several years.

It wasn’t until he was examined by another physician that Doernberg’s grandfather learned about the medical error, as well as an opportunity to remedy some of the harm that had been done to him. His grandfather was eventually enrolled in one of the world’s first clinical trials for the antibiotic streptomycin, which ultimately saved his life.

“My grandfather didn’t hold the error against doctors after that. He felt he had been wronged, but he believed there were also good doctors out there trying to do what was best for people,” Doernberg said. “In hearing how physicians both hurt and healed him, I saw that medicine was a career that carried a great deal of responsibility for people’s lives — but it also really meant something to patients when you got it right.”

“Having this medical error in my family is what spurred me to become interested in medical ethics,” said Doernberg, who teaches and conducts research in bioethics. “Some people might avoid medicine after that, and there are people who understandably have deep mistrust of physicians because of the ways that medical institutions have experimented on them or wronged them based on their race, status or class. I felt motivated to try to prevent these errors from happening in the future.”

Now, as he readies to take the next steps in his medical career, Doernberg said there is no place he’d rather be than the Brigham’s residency program.

“It’s a collection of incredibly kind, smart people who want to be the best clinicians they can be, improve medicine for everybody and do so in a residency cohort that is supportive, fun, kind to each other, thoughtful about medical education and places a real emphasis on two things: the wellness of residents and a focus on having a career that allows you to do clinical medicine plus something else in health care,” he said. “When I opened the match letter, I was elated — and I’ve been on cloud nine ever since.”

Alumni of the Brigham’s residency programs have gone on to make a profound difference in the field of medicine and beyond. Among them, several former Brigham residents have been honored with appointments in President Joe Biden’s administration.

The latest addition is former medicine resident Shereef Elnahal, MD, MBA, now president and CEO of University Hospital in Newark, N.J., who was nominated by the President to be under secretary for health at the U.S. Veterans Health Administration on March 10.

Biden nominees and appointees with Brigham ties include: