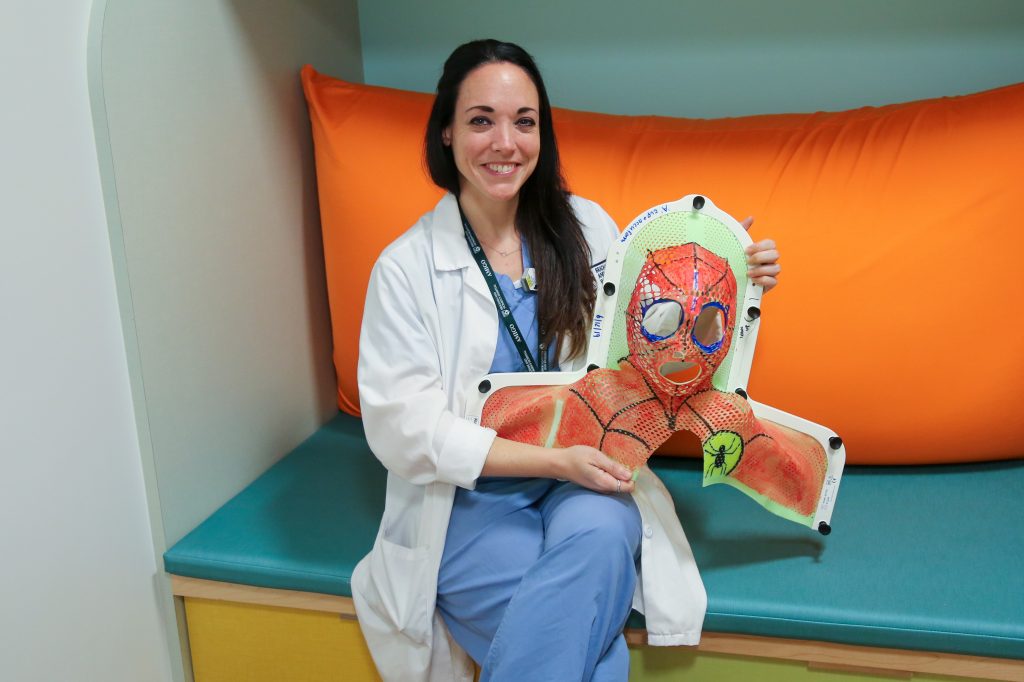 Every superhero undergoes a transformation. Clark Kent turns into Superman. Peter Parker becomes Spider-Man. Diana Prince changes into Wonder Woman. And with a little help from Lead Radiation Therapist Marianne Weiler, MBA, RT(T), pediatric cancer patients who are undergoing radiation therapy at the Brigham have the option to transform into superheroes, too.

Any patient receiving radiation therapy targeted to the brain must wear a special mask to keep their head in place during treatment. The material looks a bit like a fencing mask, covering the face with mesh or lattice-like holes that allow the patient to see, hear and breathe while being kept in place for their radiation treatment. To help make pediatric patients more comfortable wearing these masks, Weiler has started painting them with some familiar, friendly faces — depicting comic-book characters, for instance — so they look more like something you would find in a costume store than a hospital. She was inspired after seeing similar projects at other hospitals on social media.

“It hit a chord with me,” Weiler said. “Even if it offers these kids a little bit of comfort, it’s worth it because they go through so much already.”

After talking to her supervisors and co-workers about the idea, Weiler and her colleagues worked together to offer these decorated masks to their pediatric patients.

“When Marianne asked if we could paint the masks, I thought it was an exceptional idea,” said Todd Vivenzio, MBA, RT(T), director of Radiation Therapy Services at Dana-Farber/Brigham and Women’s Cancer Center.

The department has created a book of templates patients can choose from, and they welcome requests for custom designs. While superheroes have been the most popular choice, others have included one modeled after Boston Bruins goalie Tuukka Rask’s hockey mask.

“I just love what the kids come up with. They are so creative,” Weiler said. “One girl was talking about her love of chocolate, and that’s how we ended up with a mask depicting the M&M’s characters.” 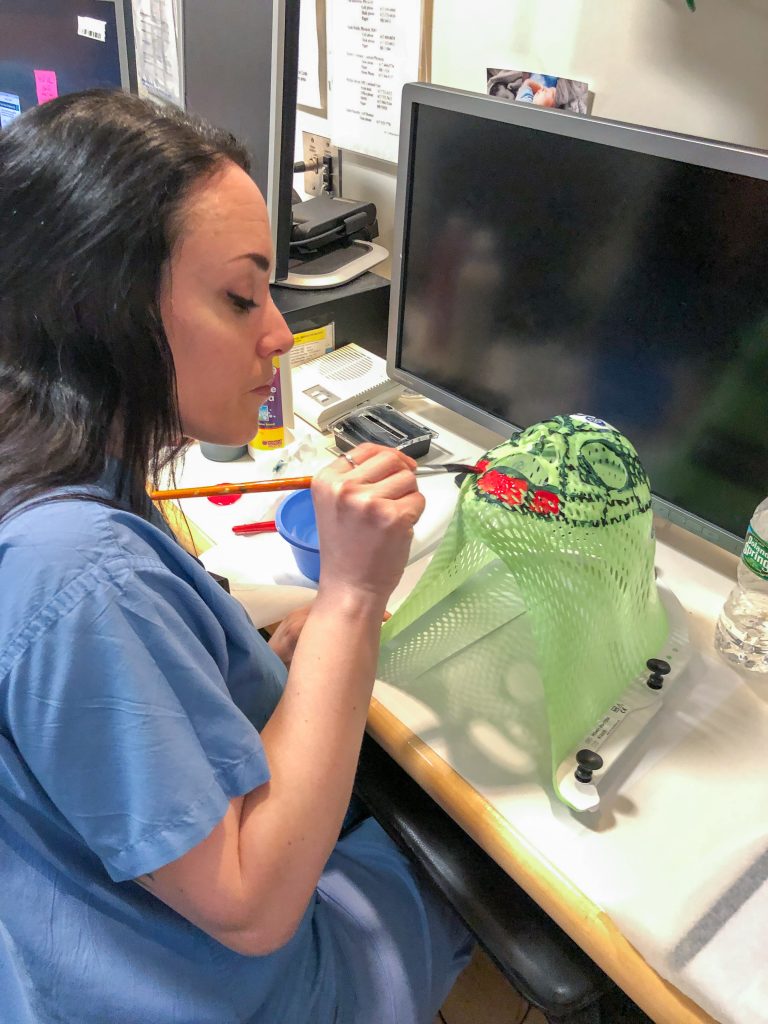 Weiler usually receives requests via care team colleagues, including Pete Meagher, OCN, RN, a radiation oncology nurse, and Courtney Audet, a child-life specialist. Once she knows what the patient wants, Weiler makes a sketch, outlines it on the mask and then uses a combination of paint and markers to fill in the design with vivid colors. The process can take about an hour, but some requests, such as the Bruins mask, require more detail and can take almost twice as long.

The art supplies are safe to use on the masks and don’t interfere with treatment. Patients who would like to keep the mask can safely do so.

In the few months since Weiler started the project, she has painted fewer than a dozen masks, but she believes even this seemingly small-scale effort has made a profound difference for patients and their families. When patients are comfortable wearing their masks, it can make them feel more at ease during treatment, which means they might be able to avoid the need for sedation — something often used with pediatric patients undergoing radiation therapy, as it can be difficult for small children to lie still for an entire treatment session.

According to Weiler’s colleagues, the tangible difference the masks make for their young radiation patients is undeniable.

“Seeing a child smile and run to their nurse or therapist with excitement as they show their custom design is truly uplifting,” Vivenzio said. “Moments like this, when the patient and their family have forgotten, even for a second, about why they are at the hospital, make what we do well worth it.”

One Response to “Not All Heroes Wear Capes: At the Brigham, Some Have Painted Masks”