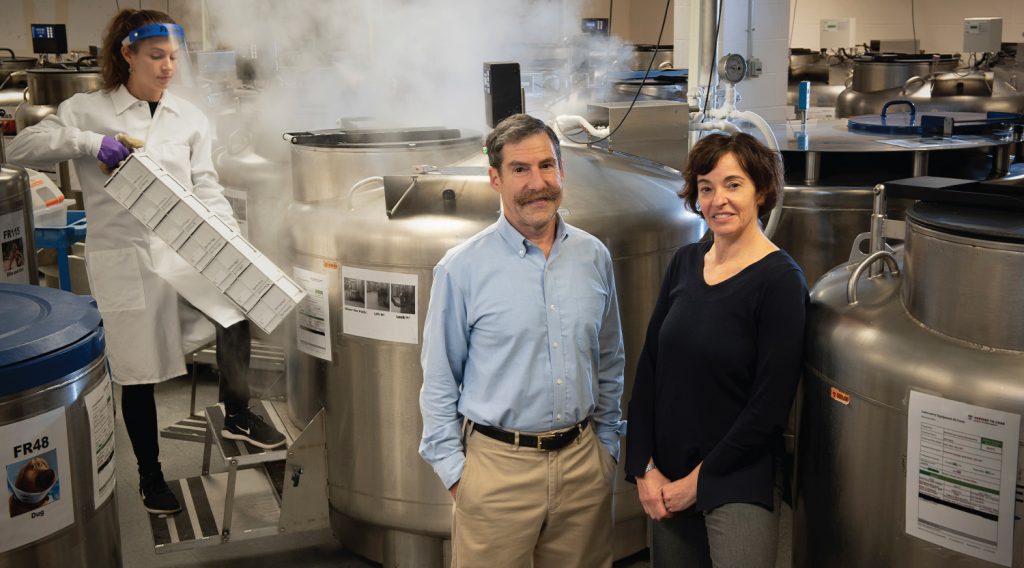 Front: Meir Stampfer and Francine Grodstein at the study’s biorepository. Back: Caitlin Barrows removes samples from a nitrogen freezer. (Photo by Stu Rosner)

The following is an excerpt from the article “Connecting the Dots” in the latest issue of Brigham Health magazine. View the complete issue at brighamhealthmag.org.

Why do some people sail through life with few major illnesses while others begin experiencing chronic medical conditions in their 20s or even earlier? Your health relies on a unique combination of genetics, biology and other factors, including your habits, education and even ZIP code — from the air quality and walkability of your neighborhood to your access to health care.

Although there is no magic formula for a long, healthy life, decades of research confirm certain behaviors improve your chances: not smoking, staying physically active and maintaining a healthy diet. While these recommendations are practically common knowledge now, 50 years ago, that was not the case. Indeed, much of the health advice we hear today stems from a single source: the Nurses’ Health Study.

Brigham researchers started the study in 1976 with one goal: follow a large group of women over time to determine if oral contraception pills cause long-term effects on women’s health. When selecting a population of women to follow, the researchers thought nurses would be good participants because of their knowledge about health and reputation as a helping profession. On the first questionnaire mailed to 171,000 nurses across the U.S., 71 percent responded. This is almost unheard of in population studies, where response rates typically range from 5 to 25 percent.

Over the past 43 years, the study has surpassed its founders’ expectations, becoming the largest and longest running investigation of women’s health worldwide. It now includes 280,000 women and men across three generations.

Helen Levitan, who served as a nurse in Europe during World War II, was one of nearly 122,000 women who replied to the first mailing. For the next four decades until her death at age 96, she faithfully completed the biennial survey, answering questions about her health, diet, physical activity, medications and more.

Her daughter Jean remembers when Levitan, at age 92, complained she had not received the questionnaire that year: “My mom said, ‘They probably think I’m dead, but I want to fill out the survey!’ She was proud of being part of such a significant study, so we got the missing survey, and I helped her submit it.”

Levitan was not alone in her dedication to the study. Of the nurses who have joined, 90 percent continue to fill out questionnaires. “In population studies like this, it’s a dream to find such motivated participants because the more data we have, the more health conditions we can study,” said Francine Grodstein, ScD, director of the Nurses’ Health Study and an epidemiologist at the Brigham.

In addition to answering questionnaires, nurses provide biospecimens such as blood samples, saliva and nail clippings, which are stored in the BWH/Harvard Cohorts Biorepository and used to study how biology, genetics and lifestyle interconnect with health.

“It was a visionary decision by the study’s founders to start collecting biospecimens years before having the technology to analyze them in a sophisticated way,” said Edwin Silverman, MD, PhD, chief of the Channing Division of Network Medicine, which employs roughly 100 epidemiologists, biostatisticians and other Nurses’ Health Study staff. “With current technologies, we can generate data we couldn’t have dreamed of before, giving us an unprecedented opportunity to understand the biological causes of disease and better prevent, diagnose and treat medical conditions affecting so many people.”

Today, more than 1,000 researchers worldwide access data from the Nurses’ Health Study to conduct investigations. Their findings have identified many risk factors for chronic diseases, as well as ways to increase survival rates once a disease is diagnosed. They have also influenced laws and public health policies and recommendations, including U.S. guidelines on diet and physical activity.

One of the study’s landmark findings in the early 1990s showed that consuming trans fats — mostly found in partially hydrogenated oils in processed foods — increases the risk of heart disease and death. Laws slowly evolved in response, starting with revised nutrition labeling for consumers. By June 2018, the U.S. Food and Drug Administration banned trans fats from the American food supply.

This achievement with trans fats came about primarily because of the work of Walter Willett, MD, DrPH, principal investigator of the Nurses’ Health Study 2. Since 1980, Willett has sent the nurses a supplemental food frequency questionnaire, which has revealed links between nutrition and many conditions, from kidney stones to cancer.

“We estimate more than 100,000 heart attacks will be prevented each year as a result of our finding about trans  fats,” said Meir Stampfer, MD, DrPH, an epidemiologist and longtime principal investigator for the Nurses’ Health Study. “Those 100,000 people won’t realize they’ve avoided a heart attack, and we won’t know who they are. Prevention does not get much attention in the public eye, but it is just as important as treatment, if not more so.”