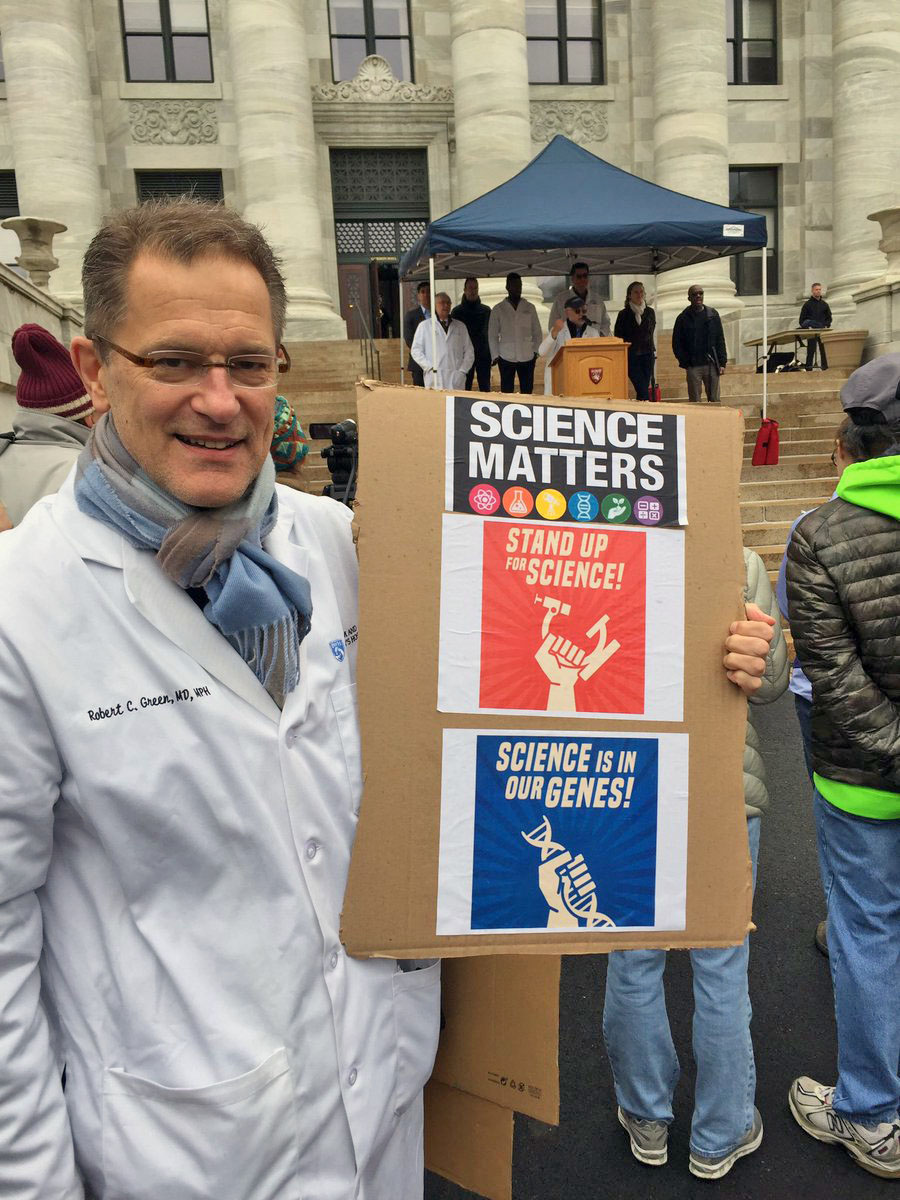 Robert Green, of the Division of Genetics, displays a sign at the March for Science rally.

BWH leadership, clinicians, researchers, graduate students and other supporters gathered on the Harvard Medical School Quad before participating in the March for Science Boston on April 22, one of more than 600 events held worldwide that day to celebrate scientific discovery and education.

Before marching together to Boston Common, Thomas Michel, MD, PhD, of the Division of Cardiovascular Medicine, welcomed the crowd and led them in singing an anthem titled “Stand Up for Science,” performed to the tune of “This Land is Your Land.” Michel, who wrote the song’s lyrics, provided an accompaniment on the accordion.

“How wonderful to hear voices joined in solidarity for science,” said Michel. “This is a march for science, not a march by scientists. It doesn’t matter whether you are a surgeon or a soprano, a chemist or a carpenter, a student or a senior citizen. We march together.”

Michel introduced a lineup of speakers that included patients, clinicians, researchers and the dean of Harvard Medical School, George Q. Daley, MD, PhD. Among the speakers was Katherine Helming Walsh, PhD, who has been both a researcher and a patient.

“I went from being a researcher in one of the laboratories to being a very sick patient in one of the hospital rooms,” said Helming Walsh. “I would not be here today if it were not for the persistence, the creativity and the courage of the many scientists who came before us.”

Fidencio Saldana, MD, of the Division of Cardiovascular Medicine, greeted the crowd with remarks in both English and Spanish.

“Science is for all of us. Science affects all of us. La ciencia es para todos. La ciencia afecta a todos,” Saldana said. “I stand before you as the child of immigrant parents who came to this country from Mexico with little more than a fourth-grade education, in search of a better life. Science has allowed me to give back to people like my parents, as a cardiologist to both Spanish- and English-speaking patients in Boston.”

Julie Losman, MD, PhD, a hematologist at BWH and Dana-Farber Cancer Institute, and Elizabeth Henske, MD, director of BWH’s Center for LAM Research and Clinical Care and director of the Brigham Research Institute, both shared examples illustrating that it is impossible to predict what research will lead to medical breakthroughs.

“Improving human health requires a broad vision that’s shared by Harvard Medical School, the Harvard hospitals and the NIH,” said Henske, who studies a rare lung disease known as LAM. “For LAM, we needed scientists studying fruit fly eyes and soil samples. Who knows what’s needed for the next breakthrough in asthma, diabetes or leukemia?”

Following the rally, the crowd joined thousands at Boston Common to hear remarks from students, physicians, researchers and others. Among the speakers on the Common was Altaf Saadi, MD, of the Department of Neurology, who spoke about being both a physician and an American Muslim woman. Saadi reminded the crowd that issues of sexism, racism and anti-Muslim discrimination are real.

“As scientists, we must fight these problems from within and take these issues just as seriously as we do federal budget cuts and other policies that threaten scientific research,” said Saadi. “Standing up for science means standing up for all scientists.”