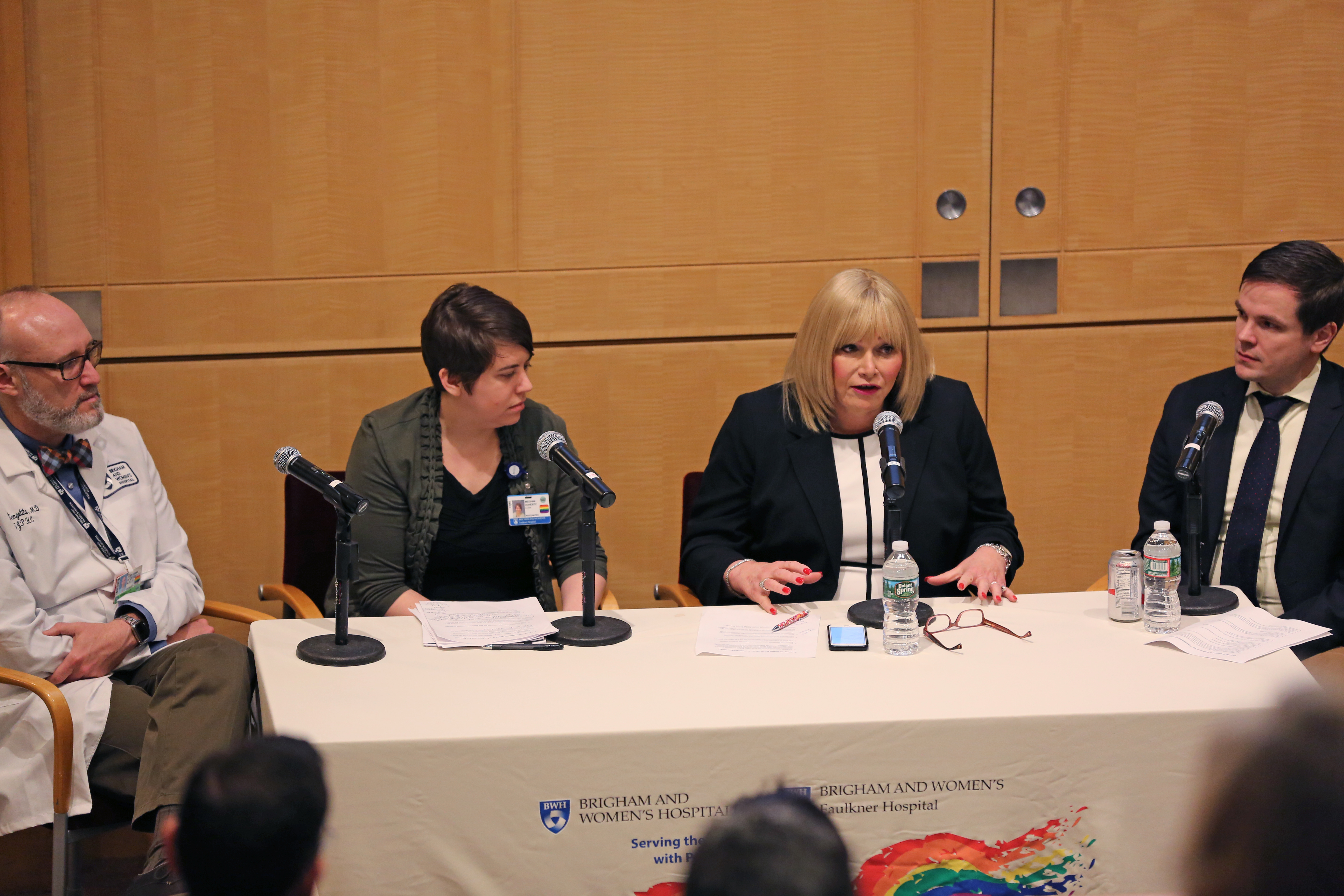 After Erica Tobias finished filling in an intake form for her first endocrinology appointment at a clinic in Western Massachusetts, she delivered the paperwork to the practice assistant with a small, but important, request: “My name is Richard, but if there is some way you could refer to me as Erica, I would appreciate it,” she said.

Tobias had recently begun to live as a transgender woman. Sitting with her sister in the clinic’s waiting room, Tobias felt relieved and grateful. She had finally found the strength to accept and address the lifelong uncertainty she had felt about her gender identity.

Then, a nurse came into the clinic’s waiting room: “Richard?” she called out.

Although possibly unintentional, the mix-up felt insensitive, Tobias recalled. It’s also a scenario many transgender patients encounter – and one that may discourage them from accessing health care – said Tobias and other speakers during a panel at BWH about transgender health issues on March 29.

“The thing that’s most important to me as a patient is to be treated with respect and dignity,” said Tobias, 62, a transgender advocate and retail beauty manager.

The event, “Tackling Disparities in Health Care for Transgender Patients,” was co-sponsored by Brigham Health’s LGBTQ Patient Family Advisory Council (PFAC) and LGBT & Allies Employee Resource Group as part of National LGBT Health Awareness Week 2017. In addition that day, the Human Rights Campaign named BWH and BWFH as 2017 Leaders in LGBT Healthcare Equality, marking the ninth year the institutions have received the honor as part of a national survey.

“Because LGBTQ people are regularly discriminated against in employment, relationship recognition and insurance coverage, they are more likely to get sick and less likely to be able to afford vital health care,” said panel moderator and PFAC member Gary Bailey, MSW, ACSW, a professor at Simmons College.

Health care providers play a vital role during the transition process – the time period during which someone starts to live according to their gender identity, rather than the one assigned to them at birth – panelists said. This creates many opportunities for discussion and education about sensitivity and health concerns.

“In my journey to become Erica, the health care that I’ve received along the way has been so important, starting with my primary care physician, who practices at Brigham and Women’s in Foxborough,” Tobias said. “Educating people, including health care providers, and making them comfortable is the direction we need to go.”

Ole-Petter Hamnvik, MB, BCh, BAO, MMSc, an endocrinologist in the Division of Endocrinology, Diabetes and Hypertension, said he makes it a point to discuss transgender health issues with medical students, residents and fellows during their training. This process often includes meeting a transgender patient who is willing to share their experiences, which can be a powerful moment for trainees, Hamnvik said.

Speakers also discussed the need for more targeted health care for transgender patients. Tobias said that during her transition, she would have loved to receive all of her care at BWH but had to seek some services – including facial feminization surgery, large-volume electrolysis hair removal and sexual assignment surgery – from as far away as Chicago and Scottsdale, Ariz., because they were not offered locally.

Panelists said discussions are underway about launching a dedicated clinic at BWH to address the health needs of transgender patients. Several groups are also working on ways for patients to easily identify which clinicians have expertise in LGBT care.

“As providers, we have the capacity to influence the health care system through our own actions and advocacy, and I think the work we’ve seen here at the Brigham demonstrates that,” said Juan Jaime de Zengotita, MD, medical director of Southern Jamaica Plain Health Center.