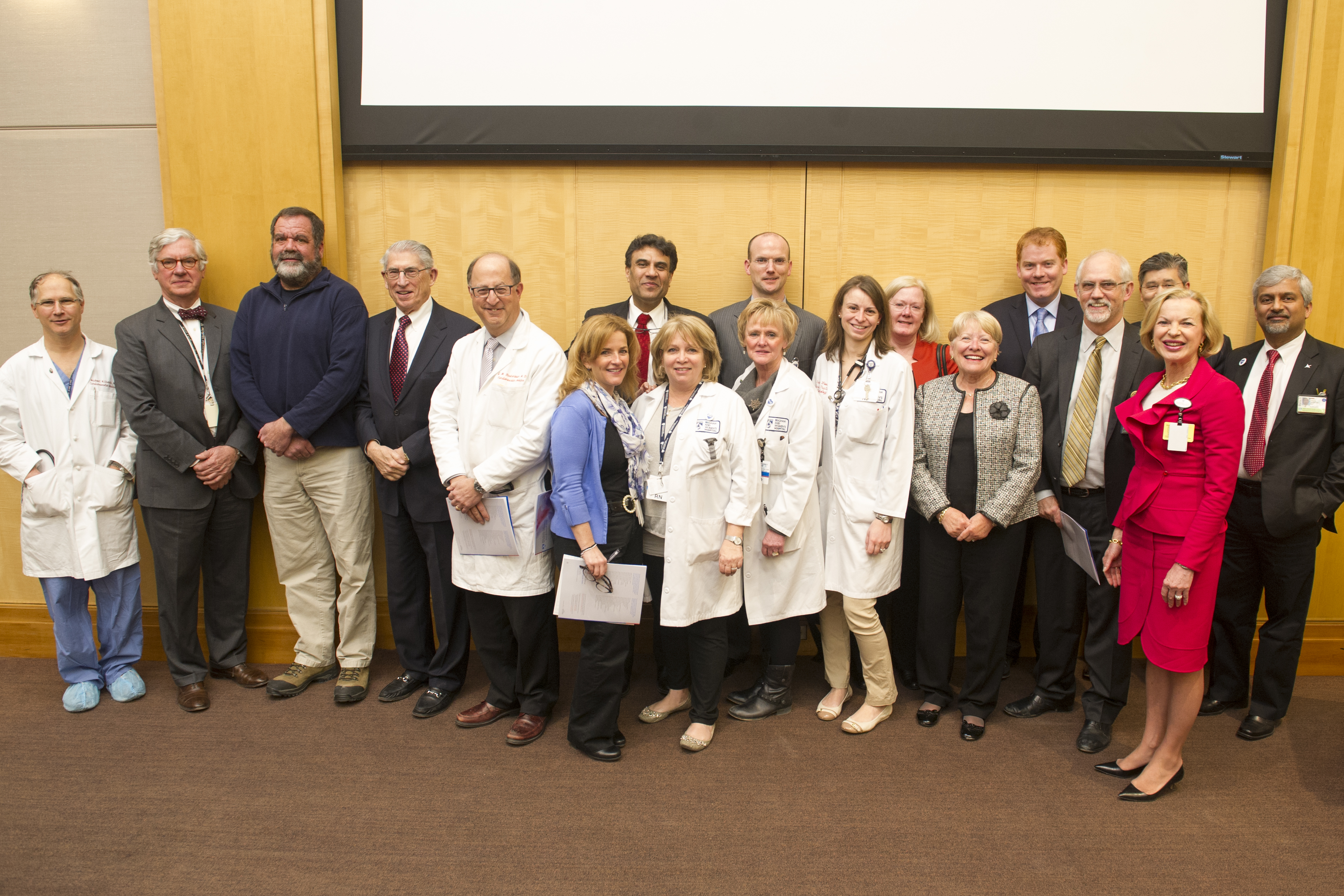 On March 5, BWHers gathered in Bornstein to reflect on a year of accomplishments, a legacy of transformational innovation and the bright future of the Heart & Vascular Center (HVC).

The second annual “Heart of the Future” event included an annual recap of the HVC delivered by Mandeep Mehra, MD, medical director of the HVC, and David McCready, senior vice president of Surgical and Procedural Services. Mehra and McCready reviewed the HVC’s mission and values and described how the HVC is trying to collectively leverage institutional and departmental resources to develop a patient-centric, integrated-care delivery system embraced by transformational and innovative medicine. The two highlighted the success of BWH faculty in furthering that vision through major clinical trials, global leadership, academic and clinical innovations. They closed by focusing on the HVC programmatic initiatives for 2015 that emphasize high-impact procedure oversight, easy patient access and navigation, inpatient care redesign, enhanced reputation and coordination of philanthropic initiatives.

BWHC President Betsy Nabel, MD, later introduced the first annual Kenneth L. Baughman, MD, Master Clinician lecture honoring the memory of Baughman, who served as director of the Advanced Heart Disease and Cardiac Transplantation Program at BWH and helped establish the platform on which cardiovascular clinical care is based at BWH.

“Ken was a model and inspiration,” said Nabel, who then introduced Delos Cosgrove, MD, president and CEO of the Cleveland Clinic, as the first visiting professor for the lecture. Cosgrove shared his views on transforming health care in today’s ever-changing medical landscape, including insights and statistics from the Cleveland Clinic, as well as a moving video on empathy and patient care.

Mehra then transitioned the focus of the event to the recently celebrated 30th anniversary of New England’s first heart transplant, which took place at BWH in 1984. Lawrence Cohn, MD, and Gilbert Mudge, MD, who played pivotal roles in the historic operation and many transplants since then, shared memories and successes from the program’s three-decade history. The two celebrated a special guest in attendance, Michael Winot, BWH’s longest living heart transplant recipient who will be celebrating the 30th anniversary of his transplant on September 25.

Expanding on Cohn’s recollection of BWH’s program launch and first procedure, Mudge detailed his experiences with Michael Winot and his family later that year. Mudge also read a heartfelt letter from BWH’s second heart transplant recipient, Matthew Shelales, who was 16 years old at the time he received his transplant in 1984. Mudge described how he received an unfinished letter from Shelales in 2006, a month after he died. The letter included an autobiographical list of what the young man was able to do because of the surgery that saved his life, including going back to school and falling in love.

Senior cardiac surgeon Prem Shekar, MD, brought the program to a close with a moment of silence to honor BWH cardiac surgeon Michael J. Davidson, MD, and his legacy of compassionate, patient- and family-centered care.